A limp and indifferent remake

Magnificent Seven is insanely beautiful. Most westerns are. Those virgin landscapes, empty mountains, all free of expansion and dirty progress. Here, those familiar images come with dollop of sunlight, saturated with warm sunsets, theatrically peaking from between hills on the horizon.

The rest of the film comes saturated by Denzel Washington, an unsurprising powerhouse who supersedes the charisma of his co-stars. Washington is untouchable. His slick, stable eyes and measured certainty when under duress lend Washington the impeccable qualities of a leader for the seven who will soon defend a small town from maniacs.

Around Washington is a disappointment, with few of Antoine Fuqua’s directorial ticks or need for this remake. The story frequently comes recycled by pop culture –  in animation by A Bug’s Life and satirized to infinity by Blazing Saddles, not even including the presence of the original or the impeccable progenitor Seven Samurai.

Fuqua punches out a dry, direct western without any subversive qualities.

If one could ask Magnificent Seven why it’s back in 2016, the response is undoubtedly silence, maybe an brief shrug. Although peppered with a diversified cast, therein sits Magnificent Seven at its most salient. Fuqua otherwise punches out a dry, direct western without any subversive qualities. The American adaptation of this story remains flush with distinctly localized attributes – capitalist agendas, greed, rebellion, and an old style U.S. of A gun fetish.

Expect more from the pairing of Fuqua and Denzel, who previously worked to upset the standards of cop flicks in Training Day, brash, cocky, and flagrant. In comparison, Magnificent Seven is as straight and studio beholden as they come, inexplicably rated PG-13 despite a body count somewhere in the hundreds. Its tropes and its style perish unusually through a routine genre exercise, which even ignoring the core elements of this story – the poor farmers, the raging plutocrat, mismatched rebels – sink into an execution seen by audiences in hundreds of westerns prior.

If anything, the modern escalation of violence begs for reconsideration. Obsessed with making its heroes out to be invincible saviors, they pop off rounds from their six shooters in such numbers, it’s a wonder how any of this is plausible. Even in consideration of the most stringent gun fantasy, the audacity with which Magnificent Seven laces the screen with tiring headshots and tripped up horses bludgeons the narrative into insignificance. Nothing matters once Magnificent Seven becomes entangled by violence.

The story as known does invest in certain mortality; it’s necessary, if dealt with such upsetting indifference by this remake as to wonder why the script bothered developing these characters. Chris Pratt has energy and spunk, while Vincent D’Onofrio does what he can with a raspy voice and bear-like screen presence. Denzel is the star though. The entire production of Magnificent Seven knows so, thinning out the drama and leaving the feature all too flat no matter Washington’s talents. 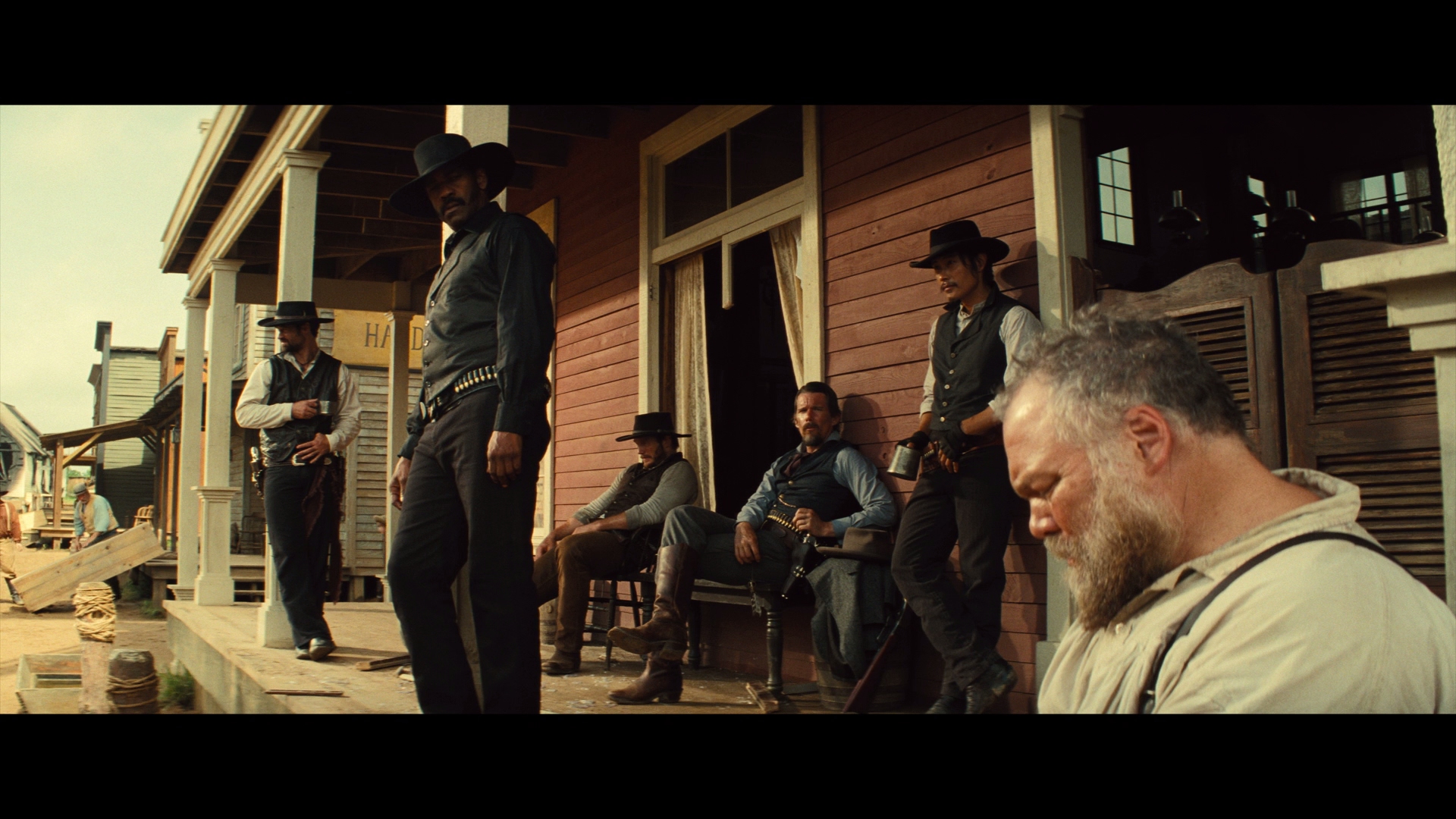 Behind that, beautiful detail. Sure, this is 2K, but the facial definition sticks out with tremendous bite. Texture sustains thanks to the immaculate clarity, if not to a great degree over the Blu-ray. Still, let that go and soak up the imagery. Pinpoint precision provides the needed sharpness. From the town’s exterior, tall grass and mountains capture enough nuance to pass as 4K even to trained eyes.

Adding heft is a sun-driven HDR pass, loving the chance to blind viewers. Looking at the skyline, intense yellows and whites push dynamic shots, that all reflecting down onto characters. This transfer never loses bite. Black levels reflect the level of available light. It seems weak, but that’s sun or fire bleeding into the scenery. When night finally falls, true black emerges.

Warmed up, flesh tones take on a deepened tan. Greenery slips a little toward orange, if not debilitating to surrounding grasses or trees. Beautiful, if aggressive by way of color timing.

Molded in an interesting, olden style, the film-based production of Magnificent Seven sings on Blu-ray. It’s stunning. Mild grain sits behind the image, expertly resolved by Sony’s encode despite a bit of a pinch in terms of disc space. Let Magnificent Seven be another lesson in the “birates aren’t everything” category.

Some old fashioned anamorphic-like close-ups may bother visual purists, but the authenticity to a classic cinema style is there. When sharp, detail simply soars. The number of impeccable, pure images nears some sort of record. Those gorgeous exteriors of towns come flushed with visible fidelity. Astonishing resolution from a dazzling film stock.

If the visuals weren’t enough, this constantly performing Atmos (DTS-HD on Blu-ray) track provides more firepower to the A/V side. Opening with sterling LFE as a mining company sets of TNT, Magnificent Seven transfers into wonderful ambiance. The town comes to life, bustling with activity or wide echoes when indoors. Those loud wood interiors hold nothing back.

Exceptional spread in the stereos seems like the peak, and then comes the gunfire. The full width of the soundstage comes alive, generous during the final showdown. As a gatling gun starts firing, bullets pierce every channel in a splendid showcase. Horses thunder into position and slam into the low-end as they do. Marvelous work.

Surface level, superficial bonuses. That’s it, with one exception. Magnificent Music, although short at four minutes, pays tribute to James Horner who died as production began. This is his final film score. It’s an emotional piece.

Generic making of The Seven focuses primarily on the cast. Directing the Seven shrinks further to focus on Fuqua. For those into action choreography, The Taking of Rose Creek details the challenges of the final shoot-out. Gunslingers hones in on weapons training, with Peter Sarsgaard earning attention for this villainous role in Rogue Bogue. A couple of deleted scenes seem to finish the disc off.

However, straight from 2009, Magnificent Seven offers Vengeance Mode, stretching the film to three hours to pack-in a bunch of otherwise inaccessible bonus features during the movie. There’s no chapter skip or other means of accessing these extras.

Click on the images below for unaltered, full resolution screen captures taken directly from the Blu-ray. Patreon supporters see our screen shots first, view our entire library in .png format, and gain fast access to 18 Magnificent Seven exclusives for as little as $1, perfect for custom cover art, film study, or other applications.

The following six screen shots serve as samples for our Patreon-exclusive set of 45 full 4K screen shots grabbed directly from the UHD: