George Romero’s Creepshow was a mild hit at the box office. It marked the first time a film from the legendary zombie master hit number one. That success led to Creepshow 2, continuing the anthology format from the first one. This time Michael Gornick had directorial duties, working off a screenplay by George Romero. Stephen King came up once again with story ideas for the three tales of terror seen in Creepshow 2. It’s an effective sequel for fans of the first Creepshow with interesting practical effects.

Creepshow and its sequel were always intended as cheesy, loving tributes to the macabre tales seen in horror comics of the 1950s. For a brief time the blood-curling tales in EC Comics frightened children across America. Comics such as Tales From The Crypt became too effective at their job. Censorship pressures from politicians basically ended the line out of fear it was corrupting young children. In that sense, the Creepshow movie franchise was a burst of nostalgia in the 1980s. Men who grew up reading EC Comics as young boys could watch Creepshow with fondness.

The Creepshow movies, including this sequel, were intended to be grotesque fun with a wink at the audience. Terrifying but with a sense of humor. Each tale in Creepshow 2 even ends on a horrific punch-line of sorts. George Romero and Stephen King were both huge names in horror by the Eighties, ensuring an audience for these films. Creepshow 2 even has a cameo by Tom Savini as the Creep, a host that helps narrates between tales. Veteran presence George Kennedy lends a hand as the lead in the first tale of terror.

Despite the presence of so much talent behind and in front of the camera, I’ve always been slightly let down by the Creepshow movies. Creepshow 2 is considered a scarier film despite only offering three tales of terror to Creepshow’s five.

The three horror segments consist of Old Chief Wood’nHead, The Raft, and The Hitchhiker. Two more stories were slated to appear but got scrapped for budgetary reasons. One of the scrapped segments actually ended up in Tales From the Darkside: The Movie. The three tales in Creepshow 2 are bridged with animation featuring a young boy named Billy and the Creepshow Creep. The animation style recalls the animated fantasy film Heavy Metal.

The Creepshow films are an acquired taste. Mixing hokey tales of horror with some humor and strong practical effects, they won’t be everyone’s cup of tea. A dime store Indian statue seeking retribution, a monstrous blob in a lake, and a hitchhiker who won’t stay dead are all up Stephen King’s alley. This is a film for fans that grew up on the franchise or read EC Comics. 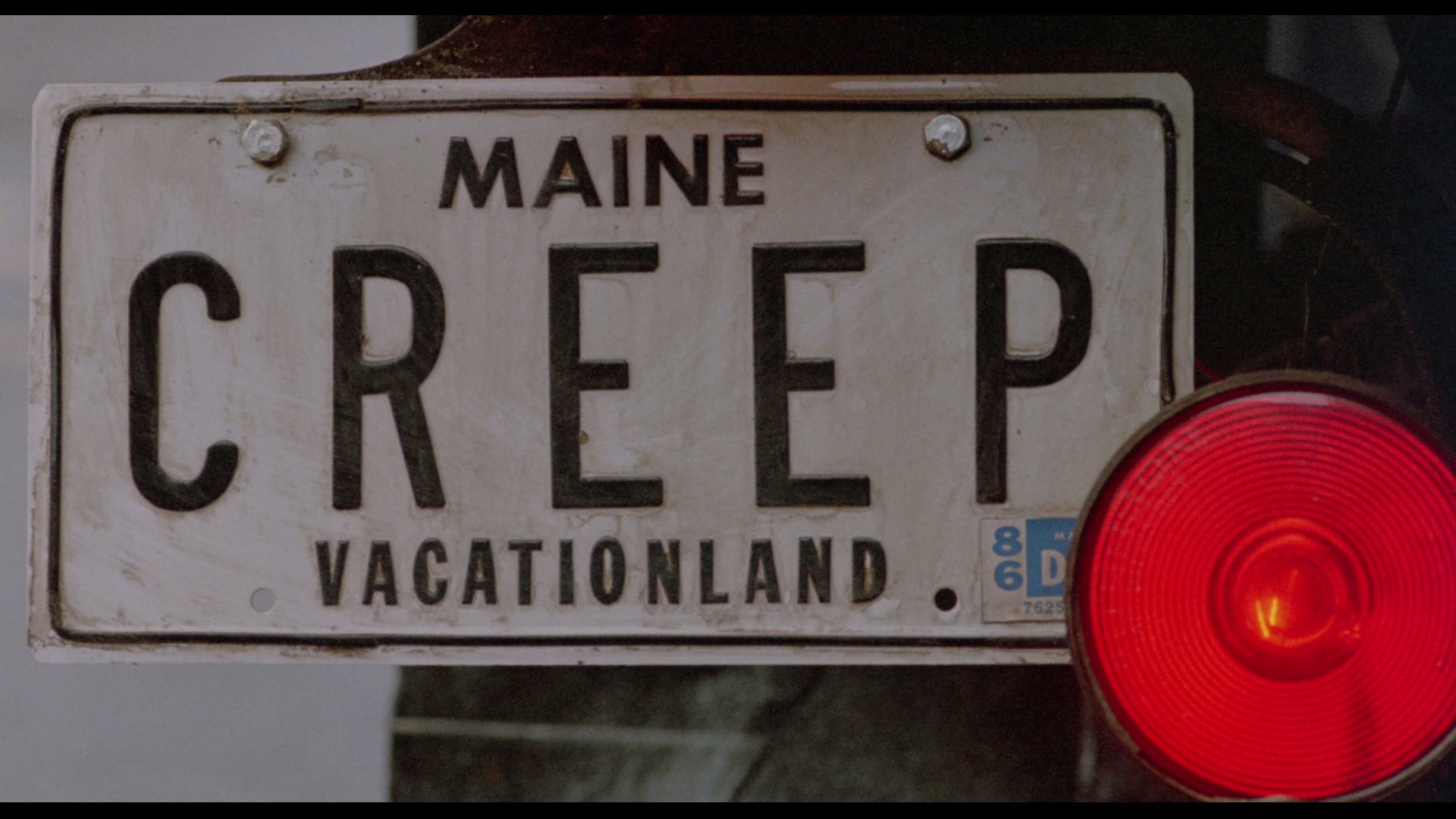 It was merely three years ago that Image Entertainment issued Creepshow 2 on Blu-ray. While I haven’t personally seen that transfer, reliable sources tell me it was an older transfer from inferior elements. Arrow Video has given Creepshow 2 a thorough film restoration from an original 35mm interpositive scanned in 2K resolution. The results are solid but not spectacular, possibly limited by aging elements. It should be mentioned there are minor framing differences with this 1.85:1 presentation. That is the expected aspect ratio for the film. There seems to be more information revealed here along the top edge.

Arrow Video puts Creepshow 2 out on a BD-50 like they do with virtually all their releases. The main feature runs an uncut 89 minutes in 1080P video. The AVC video encode averages a stout 30 Mbps, smoothly handling the occasionally erratic grain structure.

The new color grading is definitely a punchier affair with more contrast and fairly crisp definition. There are some minor problems evident in the film elements. A serious magenta push is likely the result of fading color dyes and splotchy grain is in a few scenes. Fine detail remains in the video, unfiltered. Some delicate processing and clean-up improves the overall texture and clarity.

This is definitely the Blu-ray presentation to get for Creepshow’s fans. While the new film transfer shows noticeable improvements in definition, this isn’t a pristine presentation. The sequel may never look better than this.

Arrow Video also restored the audio for Creepshow 2 and has done a fantastic job. The original soundtrack was transferred from the 35mm magnetic master reels by Deluxe Audio Services in Los Angeles and was restored at Pinewood Studios. We get mono, stereo and 5.1 audio options.

The 5.1 DTS-HD MA soundtrack is the clear winner of the lot despite precious few discrete surround moments. The primary benefit of the more expansive 5.1 soundstage is composer Les Reed’s score and Rick Wakeman’s occasional musical contributions.

It’s a lush, more open sound with better dynamics and purer quality. The mono and stereo PCM soundtracks are mastered lower in volume and offer a much less compelling sonic experience. Dialogue reproduction is crystal-clear and intelligible.

This is a loaded set with extras featuring virtually all the key contributors besides Stephen King himself.

Audio Commentary with director Michael Gornick – Perry Martin hosts this commentary but Gornick offers many interesting nuggets on the film. Apparently Barbara Eden was set to play the main role in “The Hitchhiker” until a family emergency. The conversation flows nicely without a lot of pauses.

Screenplay for a Sequel (10:45 in HD) – An interview with screenwriter George A. Romero

Tales from the Creep (07:53 in HD) – An interview with actor and make-up artist Tom Savini

Nightmares in Foam Rubber (32:03 in SD) – An archive featurette on the special effects of Creepshow 2, including interviews with FX artists Howard Berger and Greg Nicotero

Behind-the-Scenes Footage (05:50 in SD) – Test and make-up footage as Savini gets made up.

Full disclosure: This Blu-ray was provided to us for review as a pre-production screener. This has not influenced DoBlu’s editorial process. For information on how we handle review material, please visit our about us page to learn more.

Stephen King and George Romero’s tribute to EC Comics gets a satisfying sequel for Creepshow fans.

Click on the images below for unaltered, full resolution screen captures taken directly from the Blu-ray. Patreon supporters see our screen shots first, view our entire library in .png format, and gain fast access to 5 Creepshow 2 exclusives for as little as $1. They are perfect for custom cover art, film study, or other applications.