Surrounded by the isolating, overgrown heart of recession-era Detroit, Don’t Breathe becomes a film of financial desperation. In this nihilistic chiller, three kids break into the rundown home of a blind army vet, purely for monetary gain. The veteran (Stephen Lang) too, panicked, clings to the money stuffed in a safe. If anyone escapes, it’s not from the house, but from Detroit at its most economically barren.

Admittedly, Don’t Breathe requires the audience to bite down and trust in the narrative. The premise isn’t necessarily sound and as these thrillers go, smack-your-forehead stupidity on the part of these characters follows. What Don’t Breathe can do is swallow those parts for the sake of the whole, an infecting, masterful class in inescapable tension.

The film plays with brilliant darkness, particularly during an inventive sequence wherein power is cut to the basement. Bleak lighting summarizes these events too, playing to neither heroism or villainy. Shades of moral gray bounce between mental illness and conscious decision. Everyone sucks until they suck so much, their actions become indefensible.

In an egregious way, that works on the whole of Don’t Breathe. In an unnecessary nod to the headline-catching kidnappings perpetrated by Ariel Castro, the film ceases its monetary allusions to prey on victimhood. Inexplicably gross, then disgustingly comedic in its raw conclusion, Don’t Breathe amplifies its heroine in the weakest cliché possible. In doing so, Don’t Breathe doesn’t elevate co-star Jane Levy to the status of feminine fighter, but instead sexually exploits her in the most compromising way. Discussing further constitutes a spoiler, an unfortunately clever way to shield the film from additional release date criticism, leaving the audience uniformed. Know it’s cheap and crummy, totally unnecessary in terms of character too.

When working appropriately, Don’t Breathe fights for the dollars. Even after that scene of unwarranted sexualization, Levy falls to the ground, still reeling scrambling not for a weapon but her plaid backpack loaded with funds. This single shot – seconds long – reestablishes Don’t Breathe’s footing, if not excusing the events prior.

Outside, nothing is fixed. Weeds still grow through the homes on this middle class – or former middle class – neighborhood. The money doesn’t fix anything; the street remains populated only by awful, scarred people. To fix the damage requires more than a bag of cash, and the same goes for the broken lifestyles of people fighting over it. 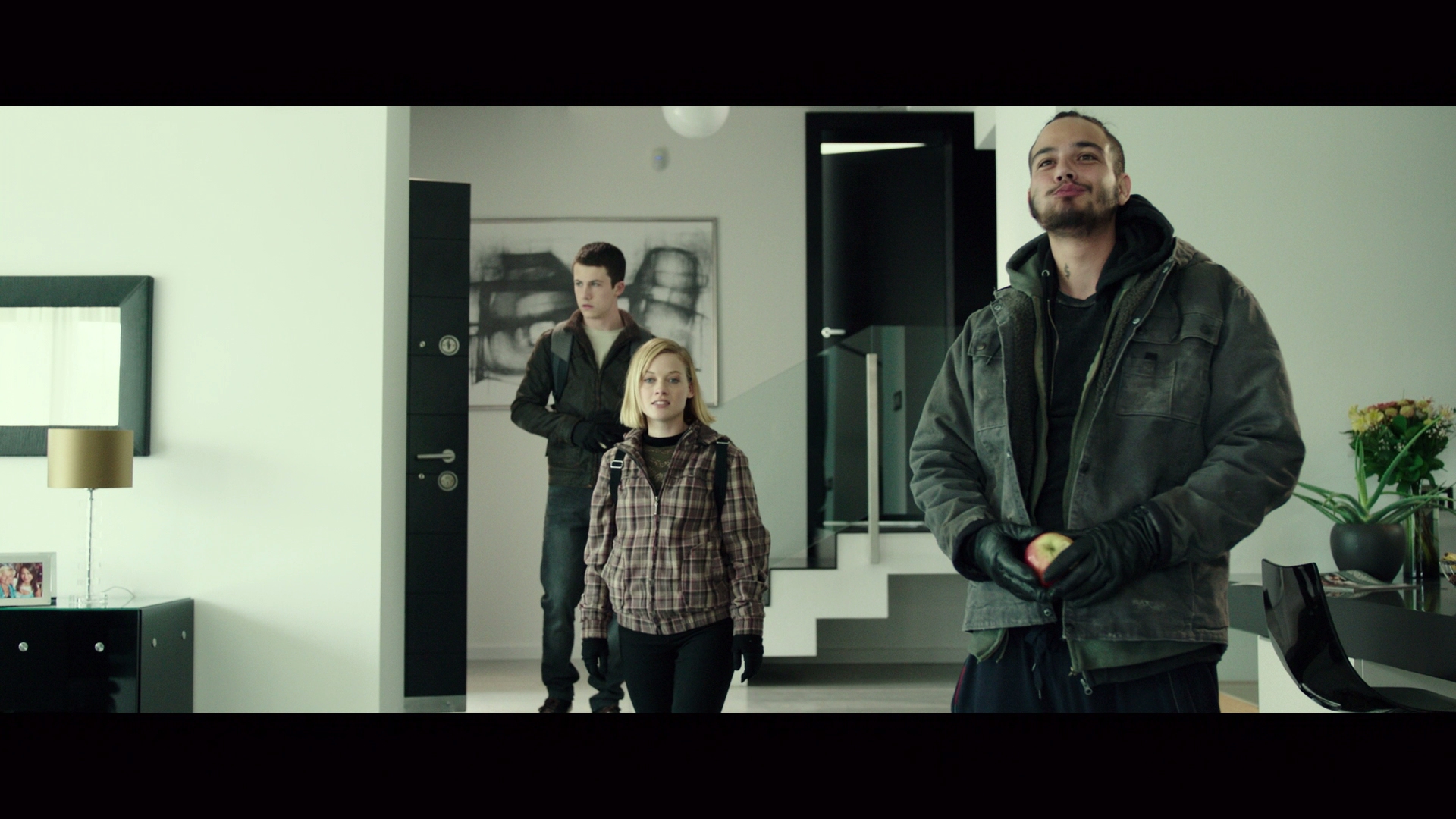 Don’t Breathe is visually enticing in a multitude of ways. Digitally lensed with a bit of noise in places, shadows become integral to the story. This Blu-ray captures the darkness’ energy, swallowing light and keeping the precise cinematography in order. Crush isn’t an issue. During the impressive master shot early, which establishes the entirety of the home’s interior, low light doesn’t eliminate the critical details. The shot feels rich, dense, and moody.

Despite the lack of interior lighting, fidelity is unusually strong. Early on, when in daylight, facial definition soars. Precision and clarity both impress, helped by the elevated contrast. Later, close-ups lose nothing.

It’s impossible to nail down the color, varied in tones and lighting as if an animated film. What begins with a cooler blue palette begins to sway between greens, oranges, reds, and still denser blues once the drama begins. The application is smart, assigning specific palettes to each room of the house for easy visual identification. With a hearty enough bitrate, Sony’s disc handles and transitions between the densest of colors without problems.

A key scene partway through pulls a creative visual twist. Instead of situating a scene in pure darkness, the screen grays out, as if viewed through monochrome night vision. No black, strictly gray. It’s unnerving, sort of alien in a way. Clever stuff.

Great tension plays out through the front soundstage, elevating the sense of space. The floor creaking away from the center draws instant tension, and this happens often. Arguably, this is too infrequent with the rear channels, although Don’t Breathe isn’t one to use that sort of trickery.

Instead, surrounds pick up empty ambiance in the home, move the score in disorienting ways, or plant a gunshot impact as needed. Precision when used? Superb, and quite effective. Also strong is the LFE support, really catching the low, strong tones of the abstract score.

You’ll need to follow writer/director Fede Alvarez for anything significant. Start with the commentary which includes Alvarez, writer Rodo Sayagues, and Stephen Lang. Alvarez continues over eight deleted scenes, 15-minutes worth, and his explanations for the cuts suffice.

Five featurettes make up the rest, a few minutes each, and almost none of them holding any weight. Creating the Creepy House offers the most insight, showing how they built a set, even for exteriors. An EPK making of, a bit on the score, and two more on the cast stay around for a few minutes more – total.

Don’t Breathe makes an almost unforgivable thematic mistake, but its tension and thrills remain high throughout thanks to stellar pacing.