Coveting Finding Nemo’s message of self-assurance and empowerment, Pixar’s revisit to the ocean is comforting. Mostly, Finding Dory comes to life without significant risk, opening on a wide-eyed baby fish before sending it off into an aquarium, albeit on a larger scale than prior.

Regardless, it’s hard – maybe impossible – not to root for Dory (Ellen DeGeneres), more so when the surroundings fill with such lush color. Each environment draws from a plethora of ocean possibilities, remarkable in avoiding any sense of visual repetition. Dory’s quest to find her parents continually feels like it’s progressing, even if it’s unlikely for her to travel any great distance.

A wide slate of characters push Dory on. So many possible toys, such limited potential for character. Yet, Finding Dory faultlessly lands a number of these small roles, some without words. A doltish bird evokes the best of animation, fully realizing the potential of the medium. The equally dim-witted sea lion follows course.

Finding Dory butts heads with Zootopia for the sharpest, most elegant teaching moments of the year

Dory’s ability to overcome her handicap meshes with the returning Nemo. After his own adventure, Nemo’s small fin isn’t even mentioned. By Finding Dory’s finish, she’ll be content with her condition. Like Nemo, Pixar excels when establishing self-doubt. DeGeneres adds a plausible fear to Dory’s personality, slowly escalating from the doubting, “I think I can,” and into an assertive, “I know I can.” That arc, predictable, expectant as it is, rallies Dory’s likeability.

Further, Finding Dory makes it okay to ask for help. In her lost panic, separated from her parents, her resetting memory turns her into a repetitious speaker, begging for assistance. Most fish shrug her off, but those helping hands reassure impressionable kids someone is always out there who understands. Probably not the best in the, “don’t talk to strangers” category, but sharply communicating how kids need to feel comfortable in seeking help. It’s not wrong to admit your troubles, physical or mental.

Better still, Finding Dory does this all invisibly through a gentle narrative. Her quest depends on others, building a team, and by mere acquaintance, helps those friends too. Until Dory’s closing speech to her octopus friend, nothing comes obviously, rather organically. Without waste, without preaching, Finding Dory butts heads with Zootopia for the sharpest, most elegant teaching moments of the year. Together, they’re a darling combo about bringing people together, and doing so in their own disincentive ways. 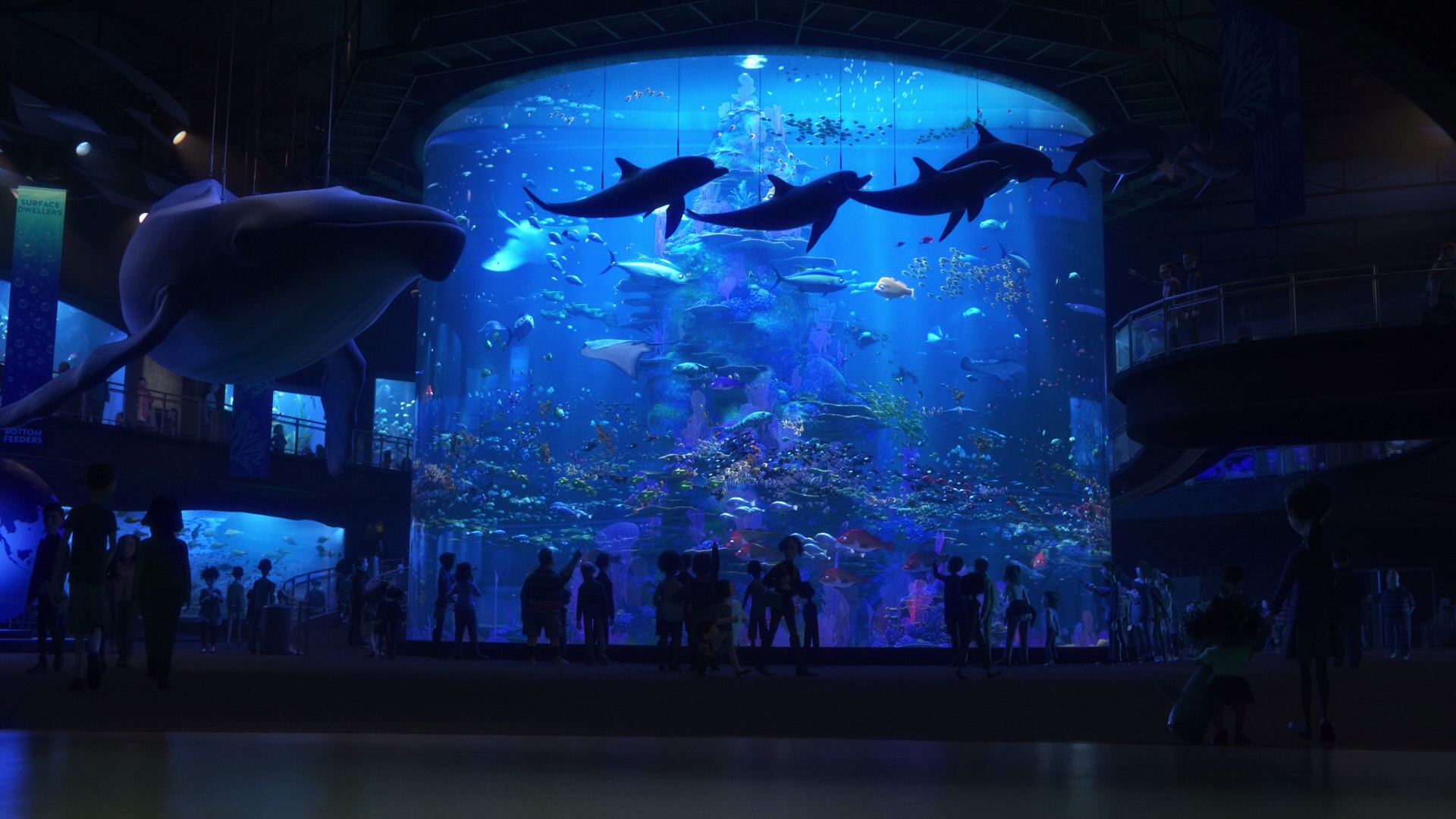 With 13 years of animation progress, it is of little surprise to see Finding Dory secede its predecessor. In terms of texture, animation, detail, and fidelity, this competition is decided in mere minutes. Sea lion fur, bird feathers, and octopus skin all rely on exquisite definition.

Fresh color palettes sweep through the entire movie. Underwater, corals breed every conceivable hue. Murkier waters show an ugly green, and when inside aquariums, dazzling blues rush onto the screen. Even the fish themselves, from the familiar oranges of Nemo and Dory’s countering blue, hit with fantastic saturation.

Scenes within the mega-aquarium set simply hypnotize. Not only for their animated technical accomplishment, but also resolution. Even when viewed with distance, schools of fish stay defined. No aliasing here. This Blu-ray is even banding-free, save for one instance. During darker scenes, particularly as Dory travels through the pipes, black levels add the depth.

When converted, Finding Nemo looked glorious in 3D. Finding Dory? The same. The natural, even perfect space of the ocean ensures substantial depth. Foreground seaweed and masterful compositions keep the format in mind. Luckily, all of this happens without succumbing to gimmicks, although the finale does pull off the slow motion rise-to-the-camera trick. It’s forgiven (and spectacular).

Excusing the intentionally muddy scenes with clouded water, nothing in Finding Dory squanders the format’s potential. 3D application throughout stretches foreground and background with unexpected intensity. Fish float right at the center, frequently traveling toward the lens. Even in the dark, Finding Dory succumbs to no cross talk. This is what the format can do at its best.

Near constant ambiance floods (pun intended) the soundfield, water passing through each channel of this 7.1 mix. Exquisite motion follows dialog or simply movement out of the frame. A sonic highlight comes from the touch tank, kids smashing their hands into the water – all around – with a pleasing low-end thud when they hit.

Persistent action makes for a fluid and active mix, constantly finding something to pin on a stereo or rear channel. Even at the start, Dory’s calls come from the back right speaker. Schools of stingrays sing, panning across the full soundstage in a vivid audio moment. The finale, with crashing trucks and panicked civilians, has plenty to offer.

On the 3D disc, only the Pixar short Piper is included. It’s an adorable piece though.

The double set of 2D discs? They’re loaded. A three-person commentary invites director Andrew Stanton, co-Director Angus MacLane, and producer Lindsey Collins into the booth. Featurettes come next, between three and ten minutes each, varying in quality. Highlights come from The Octopus That Nearly Broke Pixar, delving into the unique challenges of animating such a creature. Animation and Acting follows a similar path. What Were We Talking About, even at a brief four minutes, looks at the difficulties of telling a story about Dory. The rest (four more) fall off, although Casual Carpool is fun with Stanton driving around during a discussion with certain members of the voice cast.

With a second bonus feature disc, the behind-the-scenes section looks impressive, but it’s only five short featurettes. Animation geeks will appreciate the glitches of Rough Day at the Reef, and musically inclined types will want to peek in on Dory’s Theme. The lengthy seven deleted scenes which follow come with introductions by Stanton. Finally, Disney includes four virtual aquariums to use as background visuals for a party or other circumstances.

A sequel which excels in storytelling and beauty, Finding Dory spins a wonderful message while telling a familiar story.

Click on the images below for full resolution screen captures taken directly from the Blu-ray. Images have not been altered in any way during the process. Patreon supporters were able to access these screens early, view them as .pngs, and gain access to NINE exclusives.