There’s an egregious inconsistency to Sausage Party: Either the food’s packaging is alive or the food itself is. The answer isn’t consistent. And if it’s the food, consider what that means for animals making up hot dog meat.

Nit picky, but in a movie jumbling ideas, those questions seem in play. At one point, Sausage Party slides into the rom com format as a sausage and bun pair up for a date night adventure. In other places, it’s an assault on bigotry, truth, and religion. Someway, somehow, Sausage Party even finds a solution to a century’s worth of turmoil between Palestine and Israel (it’s gay sex).

Behind everything lies a clever concept, allowing adults to giggle, their reward for sitting through infinite animated flicks with their kids. If parents suffered through Planes, Sausage Party smacks the shameless marketability of Disney across the face. Producers Seth Rogen and Evan Goldberg pair up, producing an animated escape, tapping on the tropes of the genre while whipping it up into a sexualized, anti-religious frenzy.

F-bombs come within the first lines, a warning sign to naive parents who didn’t notice the erect hot dog on the poster

This isn’t only food, rather an entire grocery store full of products, leaping from the shelves, powered by the instinct of their creation. Hot dogs want in a bun, bagels want hummus. They’re voiced by a powerhouse cast – Edward Norton the sheepish bagel, Salma Hayek as a lesbian taco (the jokes write themselves), Kristen Wiig as a hot dog bun, and Seth Rogen as Frank, the hot dog. Casting sessions were undoubtedly a joy.

To have fun here is to withstand an unbelievable amount of crude and guilty pleasure humor. F-bombs come within the first lines, as if a warning sign to naive parents who didn’t notice the rating or the erect hot dog on the poster. Later, a discarded (but living) condom speaks of existence. Toilet paper doesn’t want to mention its life experience.

This is a weird movie. 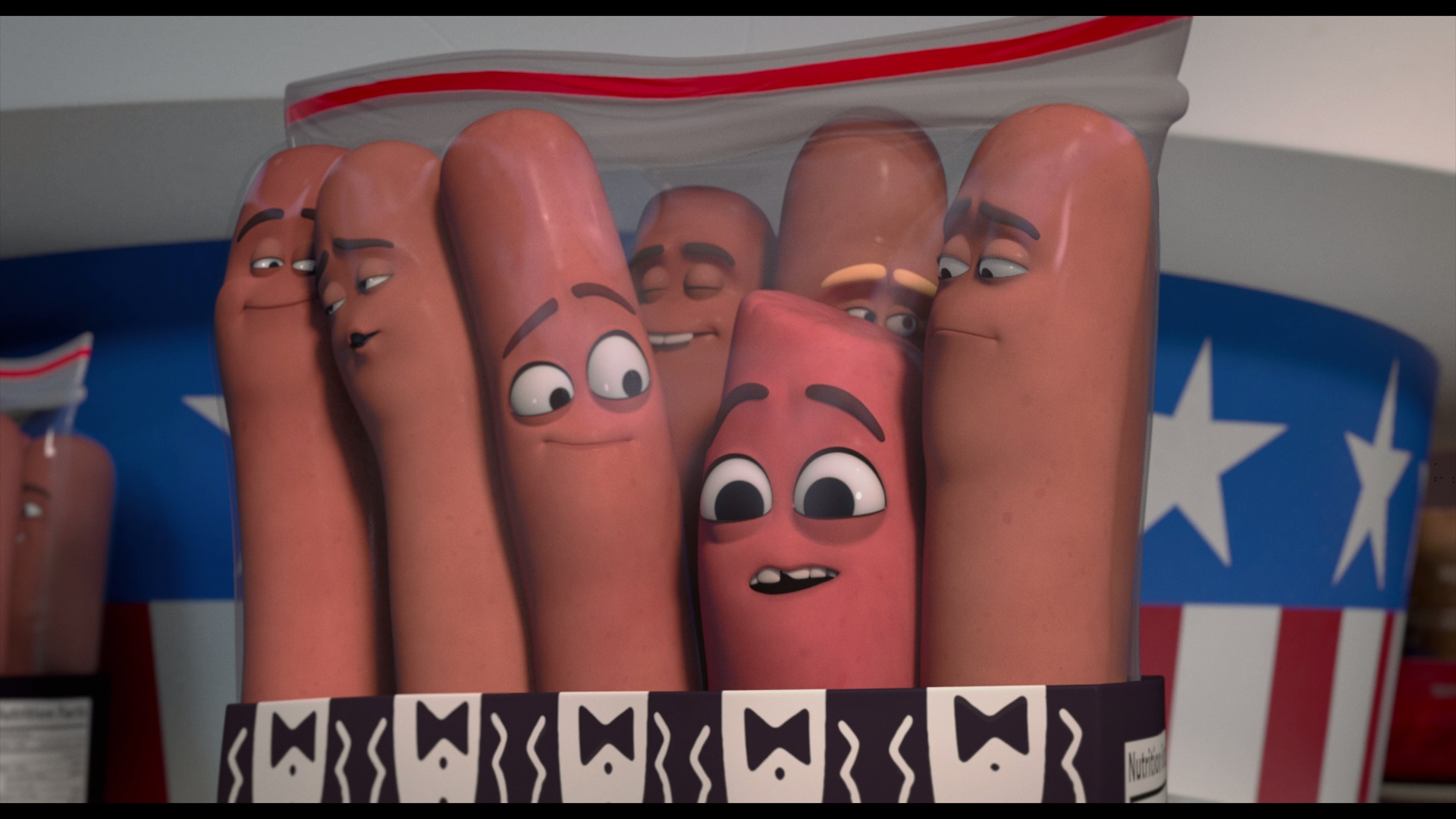 When in the food’s world, Sausage Party brings on all manner of color. Bright primaries seize the screen, rushing toward the mixed palette of the grocery store. Colored packaging comes through when wandering the shelves. In contrast, brief snippets of the human world are purposefully desaturated, almost monochrome. Separation can’t be missed.

A small grain filter sits over the film, again changing depending on the scenery. Sony’s encode handles the situation cleanly. The real challenge comes during a Saving Private Ryan spoof, grain meeting with the haze of an exploded flower bag, and still the codec keeps compression at bay.

Only slightly textured, the disc survives primarily on the familiar sharpness of animation. When available, the disc doesn’t struggle with anything. All of the small labels maintain clarity. No aliasing or other visual hiccups to report. Typical nowadays.

Lacking in adventurous spirit, the DTS-HD track on this disc fights itself most of the way. Dim accuracy causes hang ups, especially with motion. Surround channels struggle to keep the action moving. Most of the time, rears act as a support presence, filling up with the ambient audio of a liquor aisle party or the store itself.

In terms of vibrancy, much of this track comes down to the musical numbers, including a song & dance at the beginning and later, some pop tracks. Plenty of bass adds pop to these songs. Likewise, the tight LFE bumps the action up a notch, particularly with the villain who stomps around, thudding everywhere he goes.

For animated movies, including a gag reel is unusual, but the recording sessions of Sausage Party find some fun stuff in the booth. The clips last over seven minutes. A line-o-rama continues, nearing five minutes. There’s The Booth with still more, giving a few minutes to each major cast member as they discuss their characters, sandwiched between flubs and finished lines. Stories of pitch sessions and studio rejections come from Shock and Awe, with Evan Goldberg and Seth Rogen.

The creation of the almost too perfect score features in The Great Beyond. Rogen’s first ever mention of Sausage Party goes back to a behind-the-scenes interview for Superbad, a brief clip in which he discusses how to pitch projects. Finally, a one minute promo clip with Rogen dressed as Walt Disney sends this disc to the Great Beyond.

Seth Rogen is onto something with Sausage Party, but the erratic focus, tone, and joke style create a jumble from an adult comedy.