Nic Cage plays a meme in Army of One. Like the infamous “Bees!” from Wicker Man, Cage’s frequent, unflattering outbursts since his drop into direct-to-video leave him with little else to go on. Here he’s Gary Faulkner, an odd but approachable individual who bought a sword from late night QVC and went to kill Osama Bin Laden – 11 times.

Faulkner’s story is fascinating, embodying the weirdest, most outlandish slice of the Fox News generation. He’s sane, say the doctors, but also ill with kidney problems, also say the doctors. In his own mind, despite a lack of training, skills, money, or health, Faulkner sees himself as the perfect American Patriot. Someone who loves his country – but not the government – and believes his quest comes from his Christian God… who is Russell Brand.

Director Larry Charles, who sliced through the international culture block in Borat, kills this story. Or, it’s Cage, arms flailing and indecipherable rapid speech portraying Faulkner in a way that doesn’t resemble the public face of Faulkner at all. His appearances from the small media frenzy following his Pakistan trips offer reference material.

It’s funny because it’s true, wild, eccentric, and about misplaced (or mad) determination. Chris Heath’s GQ story concerning the 11 trips Faulkner made nails the tonality. Army of One does not, setting the scheme as rightfully improbable, but where everything is played for an unnecessary, out-of-place laugh. Nic Cage isn’t helping. He turns Faulkner from this weirdly affable, gentle oddball into an eye-bulging maniac, regressing toward the uncontrolled camp of Wicker Man.

Broader satire falls to the wayside, those images of people locked to TV screens post-9/11, drip fed ceaseless fear and anxiety by slanted news networks. It’s not difficult to understand why Faulkner picked up a sword in swinging defense of his country. Oddly, it’s harder to understand why more didn’t, considering. Army of One turns Faulkner wild and disconnected though, saturating him with visions of God, poking a bit at the religious right, then placating any anger with physical laughs. Somewhere in between, Army of One reveals Pakistan’s culture as passive, accepting, or even interested in this strange American.

By the end, Army of One is off the rails more than Faulkner himself. A sword battle with Osama Bin Laden (Amer Chadha-Patel) hearkens back to Hot Shots: Part Deux’s shadowy clash with Saddam Hussein, that film the grandest of Gulf War satires. Unfortunately for Army of One, this interpretation of the war on terror is just senselessly weird, playing to the possibility of Faulkner’s entire story being incredulous. Some clueless CIA agents only wreck the piece further, as if Cage hadn’t done enough on his own. 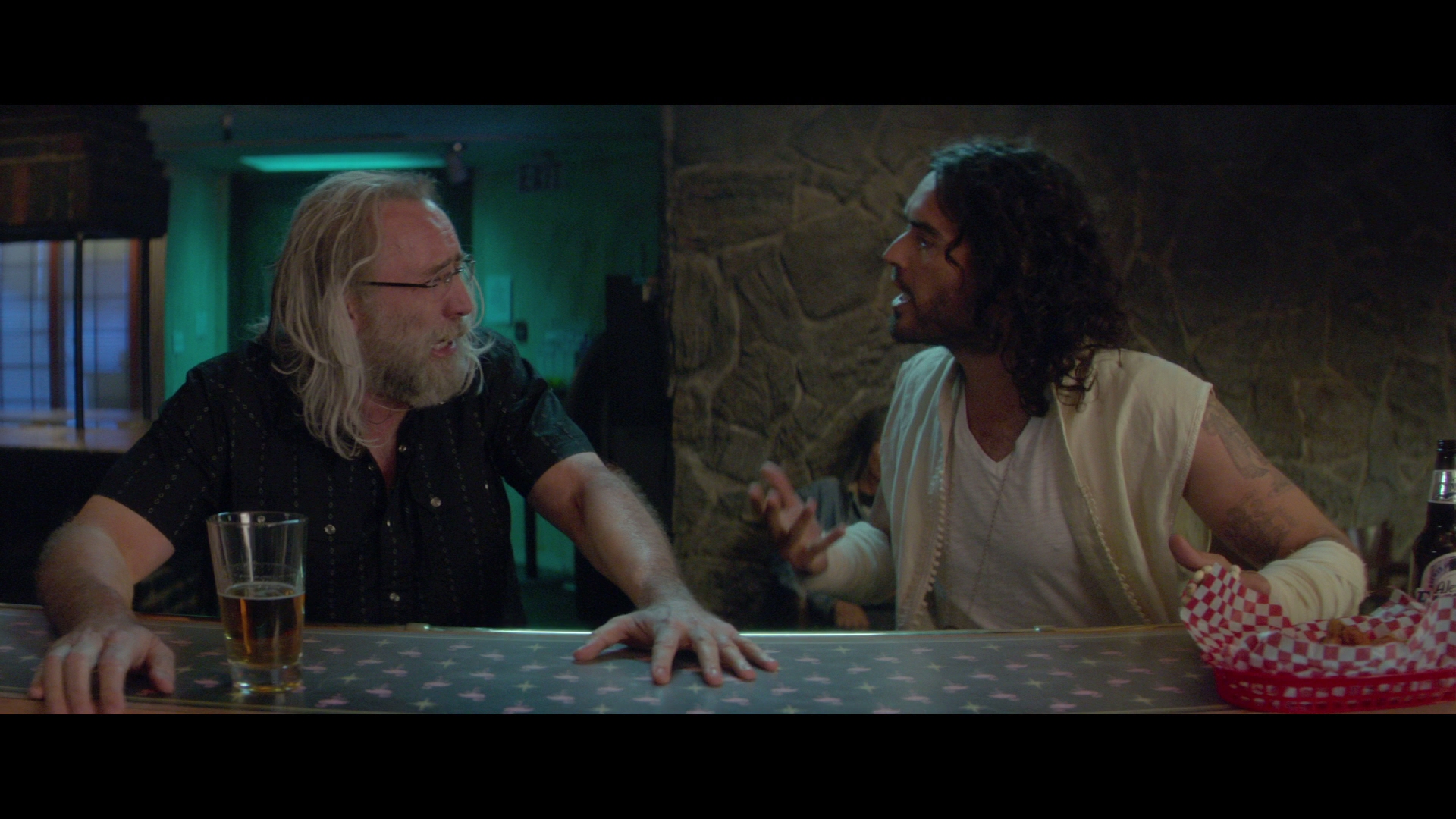 Bland, dry, flat, and lifeless. Those four words quickly capture the video quality of this disc. Some of this falls on the production, certainly, but specific faults come back and hit the Blu-ray itself. Some early banding against a bright sky is strike one. Strike two becomes the persistent aliasing, especially notable on text. Unclean fonts show up repeatedly. Anchor Bay’s Blu-ray skirts the feeling of 1080p. Strike three.

Lackluster definition, unless the camera goes in-close, persists for the full runtime. Coupled with unusually faded color and non-existent flesh tones, images come here to die. A few glances of facial detail pop up here and there. The final shot of Russell Brand, an extreme close-up, is Army of One’s highlight.

A few scenes in a darkened bar invite noise. Oddly, lighting for those few shots creates the brightest, densest color. The rest flatlines with chalky flesh tones and clouded primaries. For a story so colorful and about a bright personality, few of these choices make sense.

The bar seems nice. A few clanking glasses and ambient chatter slip into the surrounds. On the ground in Pakistan, the crowded markets fill in. The calls to prayer sweep around as well.

That’s it for this deadened, empty DTS-HD track. Stereos live a little, insinuating this wasn’t mixed for 5.1 originally. Even then, activity drops to the center channel without motion. Dialog fears moving from the middle, even when the opportunity is there.

Seven minutes of generic making of material. That’s the bonus. The one, singular, lonesome bonus.

Nicolas Cage does all he can to ruin Army of One, and it’s enough to sink the whole ship.