An uneasy tension weaves in and out of Japanese auteur Takeshi Kitano’s debut film, Violent Cop. It also marked him as an unconventional filmmaker, willing to break from cinema’s standard conventions.

After a long career as a comedian, Takeshi Kitano sprung this stark portrait of violence and corruption on shocked Japanese audiences in 1989. A steely yakuza thriller made for arthouse circles, it ushered in a new era of Japanese filmmaking that colored outside the lines. The crime thriller stars Takeshi Kitano, Maiko Kawakami, Shirô Sano, Sei Hiraizumi, and Hakuryû.

Detective Azuma is the titular violent cop. Director Takeshi Kitano plays the rogue Japanese cop, credited under his earlier comedic alias of Beat Takeshi. Kitano has cultivated myriad identities over the years, separating his earlier comedic work from more serious efforts like Violent Cop. Having been an entertainer under various guises in Japan going all the way back to the Seventies, Kitano has established a persona and personality over there that doesn’t translate immediately for Western audiences.

Avoiding the quips employed by Dirty Harry, Azuma is less a caricature and more force of nature

Azuma is a cop that uses Dirty Harry-style tactics in dealing with crime. An early scene has him forcing his way into a home to beat up a teenager after he witnessed the teen beating up a homeless man. He’s a man of few words, letting his fists often do the talking for him. Along for the ride is his rookie partner Kikuchi, astonished at Azuma’s rough approach. The one thing Azuma cares about is protecting his much younger sister. She’s a twentysomething that eventually gets kidnapped by a sadistic drug lord looking for revenge.

As Azuma faces charges for his renegade acts as a police officer, he gets trapped in a web of betrayal involving a local crime syndicate. The mysterious suicide of a fellow police officer ultimately reveals widespread police corruption. Azuma stands alone investigating the matter, threatening to expose very dangerous men.

Violent Cop is a brutal film told in staccato bursts of stark violence. Azuma often eschews using guns so he can get rough with criminals up close and personal. A series of slaps, punches and kicks come across in Violent Cop as more intimidating than merely pulling a gun. Takeshi Kitano’s performance breathes with authentic menace. Avoiding the quips employed by Dirty Harry, Azuma is less a caricature and more force of nature. When his sister is kidnapped, there is little doubt a deadly confrontation with the yakuza are coming.

Breaking out of the standard Japanese mold, Violent Cop ushered in Takeshi Kitano’s career as serious filmmaker and dramatic actor. It’s a yakuza thriller made with arthouse rhythms and crisp pacing. 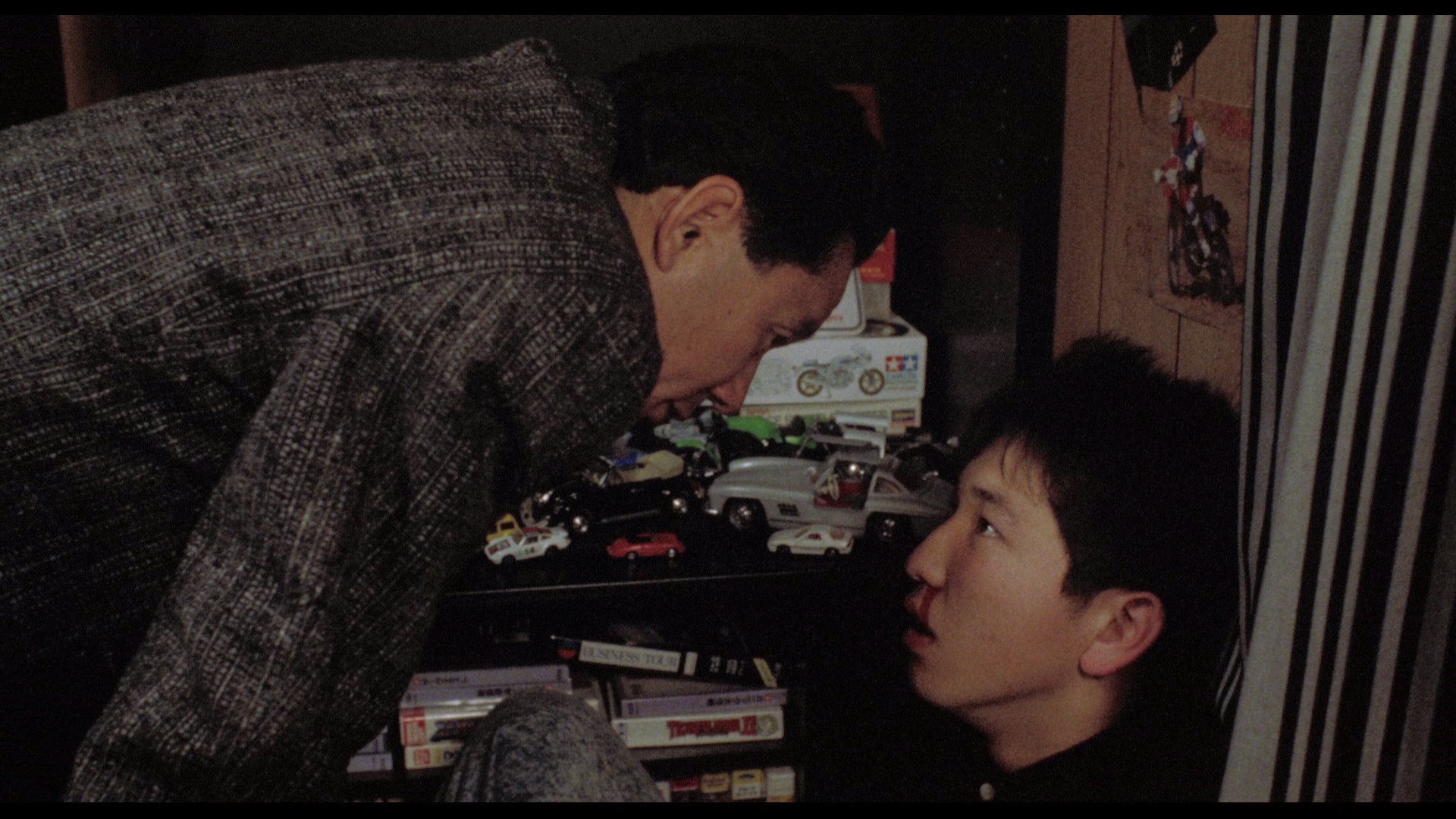 Film Movement Classics serves up a fine film transfer from pristine elements for the 1989 movie, obliterating previous DVD releases in terms of clarity and definition. Its adequate resolution is hampered in a few darker scenes but this is a sharp presentation for its age. The 102-minute main feature is given a strong AVC encode, averaging nearly 35 Mbps on a BD-50. It perfectly replicates the film’s grain structure. It is presented in a 1.85:1 aspect ratio.

Japanese auteur Takeshi Kitano’s movie wasn’t consciously made as eye candy with its unusual cinematography and presumably low-budget origins. This is a perfectly fine film transfer from pristine elements. For whatever reason, Japanese film companies are great at keeping their movie’s elements in fantastic condition. Some minor processing is evident, including thin halos in the first act.

Exteriors have stronger contrast with better clarity. Interiors are grittier, exhibiting softer video and less detail. Shadow delineation could be improved in a few scenes but overall it’s a relatively sharp presentation. The black levels are decent, leading to the faintest signs of crushing.

Given the mediocre DVD releases this movie has been saddled with in the past, Violent Cop looks better than ever from Film Movement Classics on Blu-ray. While this isn’t a top-shelf catalog presentation with outrageous fine detail or excellent dimensionality, it is very serviceable even on larger displays.

The Japanese audio arrives in a clean 2.0 PCM soundtrack. Dialogue is crisp with a dated electronic-sounding score from composer Daisaku Kume. The stereo mix offers a decent soundstage with excellent dynamic range. This is punchy audio that fits the action scenes and helps the movie’s raw energy.

A smattering of trailers for Film Movement releases and a featurette mostly featuring the movie’s producer round out the included special features. The nicest addition is a 12-page color booklet with an essay from Tom Vick on the movie. It is coded and locked to Region A. Film Movement uses their traditional clear BD case and new cover art.

Fan reaction to this release includes a vocal minority upset with the newly-commissioned cover art. Like other niche labels such as Arrow Video and Shout Factory, Film Movement Classics gave Violent Cop a new cover that resembles comic book art. Personally the reaction has been over the top to this cover piece. While it’s not a masterpiece, it fits alongside other genre releases’ covers from other labels.

That Man Is Dangerous: The Birth of Takeshi Kitano (20:20 in HD) – This featurette in Japanese includes new English subtitles. The film’s producer recalls Kitano’s directing style and fights with his own cinematographer. Kitano rewrote much of the original script, leading to most of the dialogue being improvised on set by the actors. It’s an insightful look into his working process, despite not directly interviewing Kitano himself.

Takeshi Kitano made a name for himself in serious cinema with this violent yakuza entry.