An absorbing, nightmarish classic, John Carpenter’s rousing alien saga is rife with enlarged, genuine paranoia. Painful and disturbing visuals lend credence to the terror. A creature that sculpts victims into form, sculpted by talented hands by talented hands behind-the-scenes; everything is synced.

The generous horror formula of an isolated location, sans outside communication, brings an “instant on” pacing to The Thing. Vicious with unflinching cruelty, The Thing wipes out the typical no zones of filmmaking empathy – people shoot and throw dynamite at a dog in the opening scene, the kindest canine-based transgression of the film.

Clashing fire and ice creates a wonderful slate of action. Colliding elements creates cruel deaths with unearthly screaming underneath the crackling fire. Everyone has the potential for evil,  nihilist in the best methods of the genre.

Ceaselessly violent given the opportunity, but often dry and elevated by its atmospheric uneasiness.

Howard Hawk’s film adaptation in 1951 screamed with dialog intensity and scientific intrigue. Carpenter’s take spins the tale vastly different, bleak, joyless, and bitter; it’s ceaselessly violent given the opportunity, but often dry and elevated by its atmospheric uneasiness. Silence breaks because of howling exterior winds hammering the outpost. They hint at the useless space outside, trapping characters into a claustrophobic tin can of a building. Certainly, not unlike Alien – inescapable circumstances paired with a monster, albeit the Thing is an atypical being.

In 35 intervening years, The Thing proved impenetrable to age. Dated only in the sense of wardrobe, roller skates, and computing power, the inherent phobia holds lasting power. Societal fears switched from communists to terrorists, and in either circumstance, The Thing works: They’re among us, part of us, and invisible to the naked eye. As such, no one trusts anybody and everything is suspicious. Chances are John Campbell’s original short story Who Goes There will not age either for the same reasons.

When revealed, the alien, the thing, the it – whatever – bends and contorts, an incongruous form. Later, it’s revealed this organism simply wants to go home, a story of escape where neither side can get out without the other. A solitary intergalactic tug-of-war with fire and ice. None do it better. 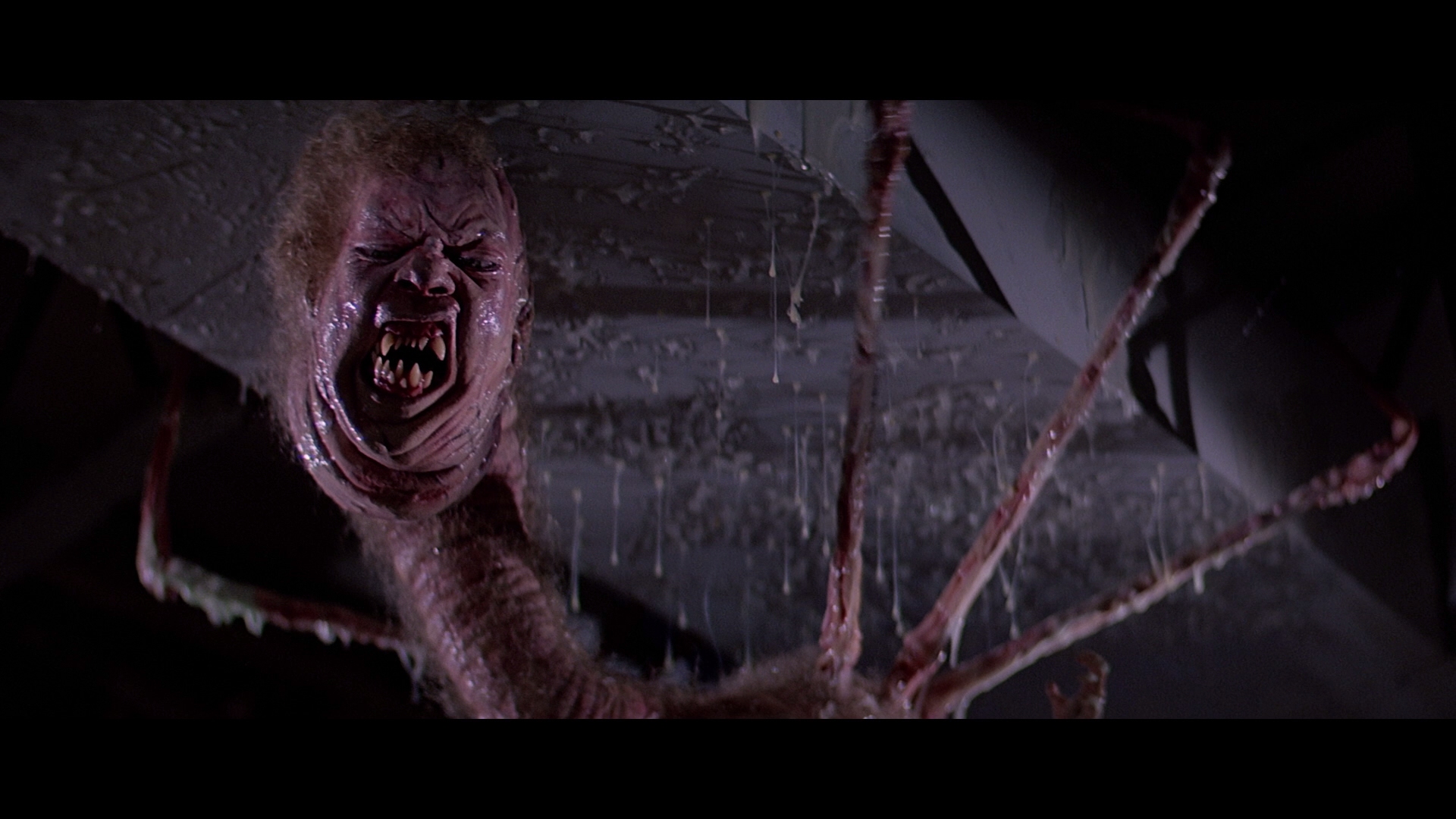 In some sense, it’s depressing to see a third party needing to take the initiative on a special edition. Universal’s HD DVD transfer performed passably, then their Blu-ray railroaded that with heavy DNR. Now it’s on Shout/Scream Factory, scanning 2K with approval from director of photography Dean Cundey.

While it’s arguably time for a 4K scan given the progress of home display tech and future proofing, The Thing comes across with gorgeous fidelity. Intense close-ups heighten with this level of definition. Focused and direct lighting leaves exceptional, consistent detail throughout.

Absolute and vicious shadows crush their share of detail, if normal for the cinematography even with Universal’s discs. A definite bump in contrast brings out additional light from the print, thankfully to no detriment of mood or tone. Exceptional encoding work brings out an initially heavy grain structure, then works to maintain filmic purity against blowing snow, steam, smoke, and more – typically artifact-laced situations. Not so here.

After the positives, in steps controversy: color. Digital grading shifts the film toward blues, away from the more organic warmth of the original transfers. It makes sense – they’re in the Arctic. A dosage of blue hovers over flesh tones and pales the film slightly. Those with enough viewing experience will pick up on digital-ness. Another subset of viewers will never notice. In terms of review, the overwhelming boost to film-like texture and sharpness is enough to override color grievances.

Carrying over the 5.1 mix from the previous releases, you’ll do fine with that DTS-HD track. Newly restored though is the 4.1 track, pulled from 70mm prints, also in DTS-HD. It’s wonderful. Purists can bicker about changes in clarity. Switching between them and even listening blind, any difference is negligible. Both have natural age to the dialog and acoustics stay unchanged considering the movie’s environment.

When active though, the 4.1 mix stands out as preferred. As the helicopter pans around the base in the opening shots, channel transitions smoothly follow. Discreet action peppers the film, including gunshots and swirling flamethrower blasts. Creature howls spread across the channels. Stereo effects from the burning logo make up a great opening. Winds blast much of the film, filling empty space.

Lost is low-end support, rumbling when dynamite explodes, if not to any dramatic degree. Expectations matched. Note some initial concerns with syncing are unfounded in the retail release.

Here we have a definite award winner. It takes two discs to fit everything and with good reason. Three commentary tracks on disc one (two of them new, one from Dean Cundey, the other co-producer Stuart Cohen) include John Carpenter and Kurt Russell’s original DVD track. Trailers and still galleries fill up remaining space.

Onto disc two, three sections appear. The first is interviews, split into six sections, running two and a half hours total. One runs nearly an hour on its own, and all of this is new. Note Kurt Russell isn’t featured. An interesting chat with the novelization author discusses a rarely featured section of the industry. Under the banner More of The Thing is the TV version of the movie, certainly not recommended given the cuts and the fading VHS quality, but it’s a wild curiosity. A location visit from 2003 shows the real world isolation of the set. An odd, condensed version of the movie pops up in a product reel. Concept artist Mike Ploog gets his due in a rolling stills gallery. You’ll also find Terror Takes Shape, Universal’s feature length documentary on the film.

A section of featurettes holds deleted and extended scenes. Other shots include 1980s promotional clips and behind-the-scenes stuff. All together, it’s seven to eight hours worth of stuff. Pair with the commentaries and it’s longer still.

Essential horror and lasting visual effects make up John Carpenter’s near perfect version of The Thing.