What an odd thing this movie is, ransacked by its spectacle and overwhelming desire to artificially entertain. Tarzan, now civilized and involved politically, is shoved into a story of African slavery, British colonialism, and miscarriages. It’s a studio film – expensive, large in scale, and simple – but the most apt of examples in this era of cinema.

Christoph Waltz is fantastic. That’s for Legend of Tarzan and anything else where he’s allowed to play a sniveling, conniving scumbag. Few actors better capture arrogance. Credit for Alexander Skarsgard’s muscular bodybuilding show too, one of the few authentic things in this movie.

Then nothing else works. Tarzan and Jane pitch a romance which is either fodder for drug store romance novels or contemptible, old fashioned damsel-in-distress drama. New as Legend of Tarzan purports to be, it’s shackled by decades of fiction which trotted out the same tropes.

Worse still, the film is egregiously overdone, pouring out scenes of unintentional hilarity. Tarzan forcibly casts himself as an animal calling, bullet taking, thunder punching superhero. Soon, he’ll cross over with Warner’s awful DC lot. Tarzan won’t be out of place. The glum and moody aesthetics link the properties visually. Worse, this doesn’t seem to be an accident, rather the only methodology Warner knows.

Pandering to century old guilt and preservation but without any success in delivery, Tarzan sinks under its miscalculation. Tarzan speaks for race and against anti-slavery propositions, but then fights stereotyped jungle cannibal tribes near the end. Yeesh.

Again, a studio film, but one which joins the awful lot of Independence Day Resurgence in tiresome bloat and aimless excess. Figuratively, it appears a cigar chomping studio exec bemoaned the use of real world locations, demanding phony green screens and unnecessary effects.

We’ve arrived at such a state to where studios believe Earth no longer produces enough Earth to photograph.

Say this is the blockbuster as it’s been since Star Wars, but in this case, director David Yates commented that Africa wasn’t perfect enough to shoot on location. We’ve arrived at such a state where studios believe Earth no longer produces enough Earth-like beauty to photograph. Soon, we’ll land on Mars. Someday, Warner Bros. will shoot the first ever film on a new celestial body, but they’ll hang green screens and “enhance” the Martian landscape – the shoddiness of modern popcorn cinema.

For Legend of Tarzan, it’s not worthy of popcorn. Food isn’t a thought as the well dressed Tarzan walks, fists clenched, through suffocating blue-tinted interiors. This is an angry, spiteful movie whose only levity comes from Samuel L. Jackson, a character who espouses his history of slaughtering Indians on their native lands. What great fun on the silver screen, where even escapism isn’t allowed to escape from anything. 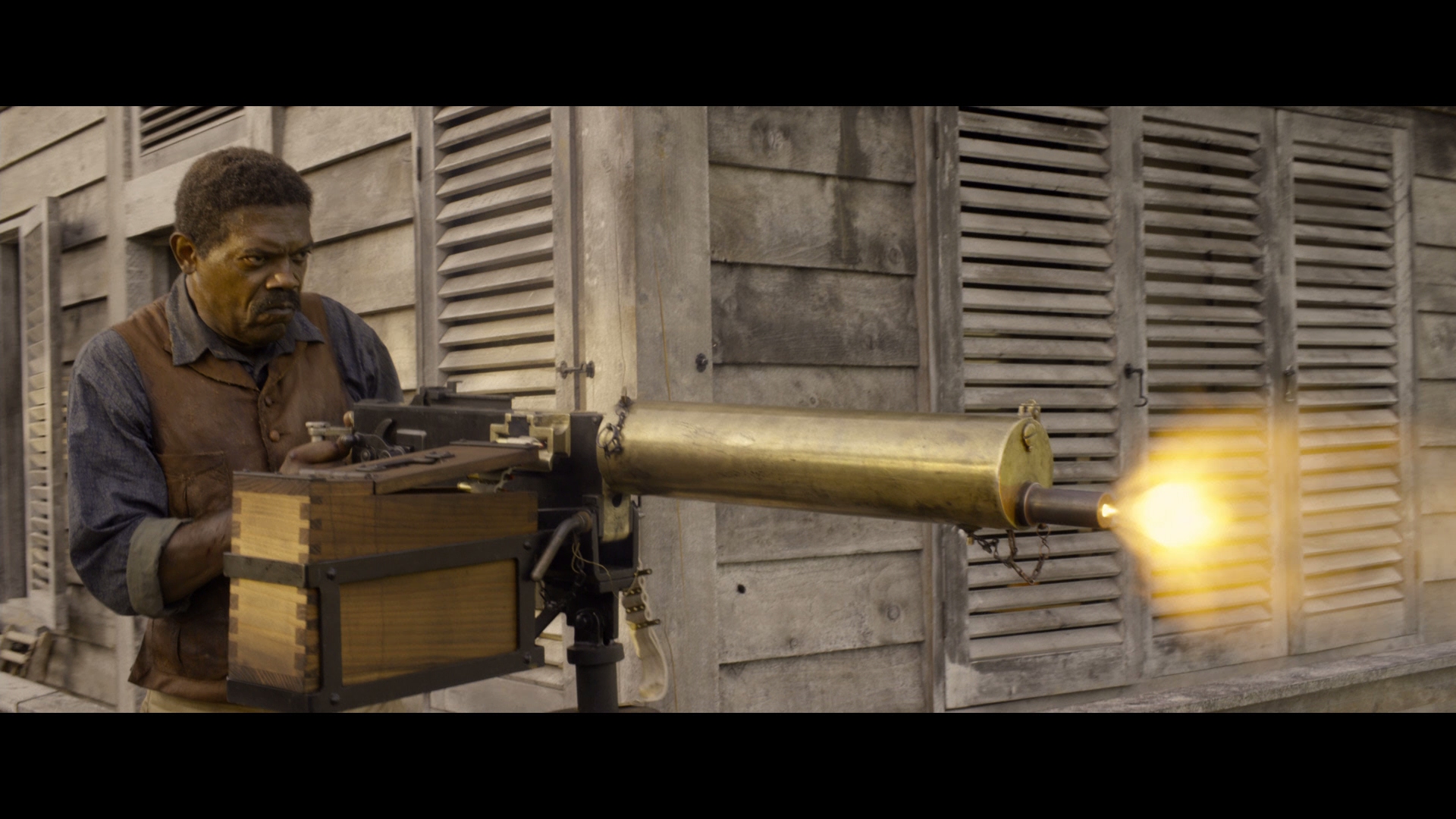 I’m breaking from the usual format of DoBlu momentarily for additional editorializing: Legend of Tarzan, for 50% of its running time, is one of the ugliest films I’ve seen. It’s not Warner’s encode (we’ll get there) but the coloring. A film so oppressively sulky, it takes jungles and makes them hideously blue. And no, not in the usual slightly off gray or teal, but legitimately blue. Pure, super saturated blue – and it’s stupid. Insufferable, ungainly, ugly, and completely nonsensical, as if the colorist was choosing to play off years of contemptible orange and teal schemes to see if audiences noticed. I did. Actually, don’t blame the colorist. The cinematographer, maybe David Yates, and others have their part too. Whoever made this choice remade the jungle digitally, then modified it all to take every bit of visual bliss away.

So Legend of Tarzan is blue, but to insinuate an older look, sepia plays in too. Those two palettes make up the majority, with flashbacks cranking on contrast to bleach out whites and overdose on a handful of colors. But only a few select hues, less a movie about Tarzan feature extensive greenery.

The rather small file size of the main feature appears to cause problems. Hideous noise creeps into a few shots (the bluest of the blue), causing excessive compression and ruining a romantic interlude. Far too many visual effects shots introduce noise, and an obvious layer of digital de-aging during a flashback further exacerbates the issue. Lean encoding parameters do not help.

As a result, fidelity suffers. Facial definition fades early with limited and selective recovery. Visual effects cause a noticeable slippage in resolution. While the digital cinematography captures, gorgeously, a number of real world African vistas, the rest pale to reality. Couple this with compression woes, and Legend of Tarzan limps into existence, a few stray scenes acting as eye-popping outliers.

The reason 3D struggle(d/s) in the home? Presentations like this. While opening scenes compose for this format and one or two action scenes successfully rate high on the grading scale, the rest doesn’t need to exist. Despite the level of computer generated imagery, the same aggressive 3D stance used in traditional animation will not apply.

Jungles appear flat and contained, limited in foreground/background dimensionality. Pop out effects number in the single digits (count-on-one-hand single digits) and fall in is entirely counterfeit. A key scene pitting Samuel L. Jackson high on a tree stump looking down so arbitrarily separates layers as to be nothing less than an imitation of better 3D.

Here’s something. A magnificent TrueHD 7.1/Atmos mix boasts awesome range and channel accuracy. Huge gunfire, thundering apes, spectacular pans, and energetic jungles all connect as one. Clearly, money well spent, more than can be said for the rest of this production.

Even when in civilization, horse drawn carriages pan around, into the stereos or rears. The expectations for channel separation now compared to just a few years ago is tremendous. The same intensity follows into the jungle, absolutely flawless when a gathering of apes surrounds Tarzan. They whip around the rears and collect in the fronts. This of course ties into the level of available ambiance, from insects to bird calls.

For the best in LFE, cue up machine guns, exaggerated fist fights, or the topper, a full stampede in the finale. Like an earthquake, buildings begin falling and villains suffer a death underfoot. Each step lowers deep to add power, weight, and scale.

Flimsy bonuses incoming, starting with Tarzan Reborn. David Yates and company discuss why they chose this project and how different the intent was. Three key scenes get dissected under the banner of Battles and Bare Knuckle Brawls. Each segment runs a few minutes. The romance features in Unfailing Love, with Creating the Virtual Jungle digging into the choice to shoot on sets. Hilariously, the next featurette layers praise on the beauty of Gabon, Africa, immediately following Yates’ comments on how the real jungle couldn’t suffice. A quick PSA against the ivory trade comes up last.

An overdone attempt at old fashioned romance and spectacle, The Legend of Tarzan instead succumbs to the allure of visual effects.