An American Classic Set in London

The answer is zero.

Undervalued but deserving inclusion in Universal’s monster canon, Landis’ striking and memorable take springs to life with cruel gore and witty admiration for absurdity of werewolf lore. But, it’s ironically cruel, even smarmy in the case of its British slant. Victims swirl wine glasses as they roam around their flats and sarcastic jabs at punk culture line the subway.

On the underside is a sincere story of grief and guilt. David Kessler (David Naughton) experiences persistent feelings of remorse over his friend’s death at the hands of a werewolf, brushing them off as the curse grows stronger. To American Werewolf, transformations are more than puffy special effects – it’s a complete turn away from being human. As the full moon nears, Kessler’s empathy and control slip away. It’s subtle, slow, even ponderous, yet original and no one matched this sly methodology since.

Landis’ film is vicious, and when in force, unrelenting. Yet, still funny.

Horror comedies came before American Werewolf. Satires and parodies of ‘50s sci-fi bled from the ‘70s, Attack of the Killer Tomatoes and Piranha among them. American Werewolf, though, casts aside the innocent tone, drifting toward Universal’s golden age, with the bloody consequences of a lenient, MPAA-led system. Landis’ film is vicious, and when peaked, unrelenting. Yet, still funny. Consider the horror genre surrounding American Werewolf – The Thing, The Fly – gruesome and gooey. So is this one, but notably amusing, both with subtlety and not.

The mixture is masterful. Nowadays, it’s the type which makes studio management demand changes. Directorial fallout and studio changes from Heaven’s Gate weren’t felt in full by ‘81, at least not to any extent for John Landis. Maybe Animal House afforded him leverage; it’s hard to see otherwise how this reached completion without pressure from higher up.

It’s possible to thank American Werewolf for many things. For casting a commercialized safety net for something like Gremlins and Tremors. For its Rick Baker-designed visual effects, including a masterful werewolf turn set into motion by the driest, smartest of montages. For opening with foreboding dialog, immediately after visually connecting the lead characters to sheep. And for simply existing as it does, all the way through to the raucous, hilariously over-staged finale. 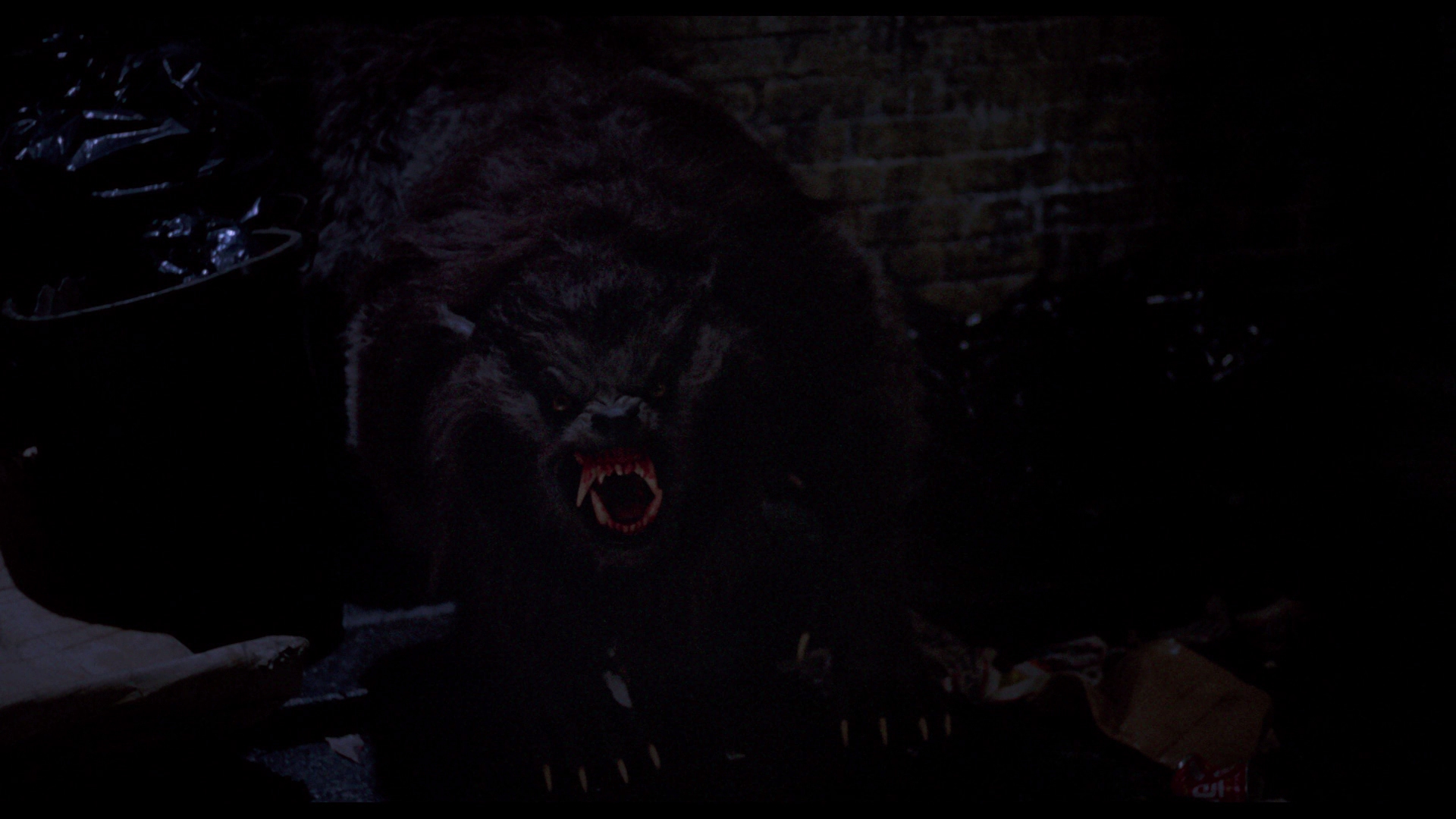 Prior, this movie looked awful on digital home media. On DVD, on HD DVD, on Blu-ray, Universal’s invasive processing refused to go away. A sticker on the slipcase for this “Restored Edition” notes the “improved HD picture.” That’s correct. Universal still adds their distinctive digital touch-up though.

The good: Fidelity improves. In close, facial detail pulls from the print. A boost in natural resolution as opposed to artificial sharpness gives the feeling of actual film. Organic color doesn’t feel oversaturated, whereas in previous editions, David’s red jacket bled out. Source quality preserves the source without damage or imperfections.

Without the egregious edge enhancement, cinematography better fits the ‘80s aesthetic. Naturally softer shots appear as such. It’s an acceptable transfer, and for once marketing doesn’t lie. Universal could use the “best it’s ever looked!” line and get away with it. There’s still room for improvement however.

Some of these effects date back to the HD DVD, if without this much prominence. Purists may find the separation too direct and specific – clearly upscaled from stereo. However, the fidelity boost, especially in terms of the soundtrack, makes this DTS-HD track worth it. Blue Moon sounds great.

Beware the Moon is the lone new bonus feature, but it’s a doozy. Shot around 2009 or so, the (sort of) fan-produced documentary digs up nearly everyone involved to discuss their role for a feature length production. Those who viewed The Shark is Still Working on Jaws’ Blu-ray, this is similar in style. Production values lack the might of a major studio, yet the retrospective leaves nothing untouched.

Cast aside any previous editions then. Everything is here, including the commentary from David Naughton and Griffin Dunne. Two Rick Baker interviews – one older, one newer – discuss the effects. Some vintage footage includes a promotional making of and Naughton having his hand cast. A pleasant John Landis interview spans 18-minutes. Silent outtakes and stills (storyboards, set pics) make up the last of this new edition.

John Landis’ eclectic, unusual spin on lycans turns out to be one of the best. American Werewolf in London has no equals.