Hot off his Oscar-winning performance in From Here To Eternity, Frank Sinatra’s next movie would see him expand his dramatic acting range even further. Suddenly is a lean thriller about a psychotic war veteran becoming an assassin. His target? The President of the United States. The only people standing in his way are a small-town sheriff and a retired Secret Service agent.

Lewis Allen’s 1954 film holds an odd place in cinema history. Due to the vagaries of copyright law, Suddenly slipped into the public domain by accident. The cold-blooded thriller gained even more notoriety after the fact, when its seemingly prescient plot foretold the Kennedy assassination with alarming similarities. Suddenly was supposedly one of John F. Kennedy’s favorite movies. After Kennedy was assassinated, Frank Sinatra asked that Suddenly be withdrawn from circulation out of respect for the man.

With more distance and perspective from that terrible event, Suddenly delivers a fairly gritty movie led by a very intense performance from Frank Sinatra. Still widely known at the time as a crooner, Sinatra’s wired portrayal confirmed he was a serious Hollywood actor with a bright future outside of musicals.

It’s one of the more driven acting performances of its time.

Suddenly stars Frank Sinatra as a psychopathic assassin named John Baron. Baron and two flunkies have been hired to kill the President. The President’s train is expected to make a scheduled stop at 5 PM in the small, peaceful town of Suddenly. Retired Secret Service agent Pop Benson (character actor James Gleason) lives with his widowed daughter-in-law Ellen (Nancy Gates) and her son. Baron and his henchmen plan to take over their house near the train station, holding the family hostage. The only man that may get in Baron’s way is Suddenly’s town sheriff, Tod Shaw (Sterling Hayden).

The taut script moves with excellent pacing. Running under 77 minutes, Suddenly moves to its inevitable conclusion with a few unexpected twists and turns. It’s a smart thriller with believable characterization. John Baron and sheriff Tod Shaw play off each other nicely as characters, both former soldiers. A lesser film may have turned this plot into an anti-war screed. John Baron is revealed to be an unstable maniac, a ruthless killer that found he loved it. Tod Shaw came back from the war much differently, the yin to Baron’s yang.

This is an easy movie to recommend for Sinatra’s performance alone. It’s one of the more driven acting performances of its time. Leading Hollywood stars rarely took this kind of role in the 1950s. I imagine it would have been one of the first things movie fans would have thought about after JFK’s assassination in 1963. 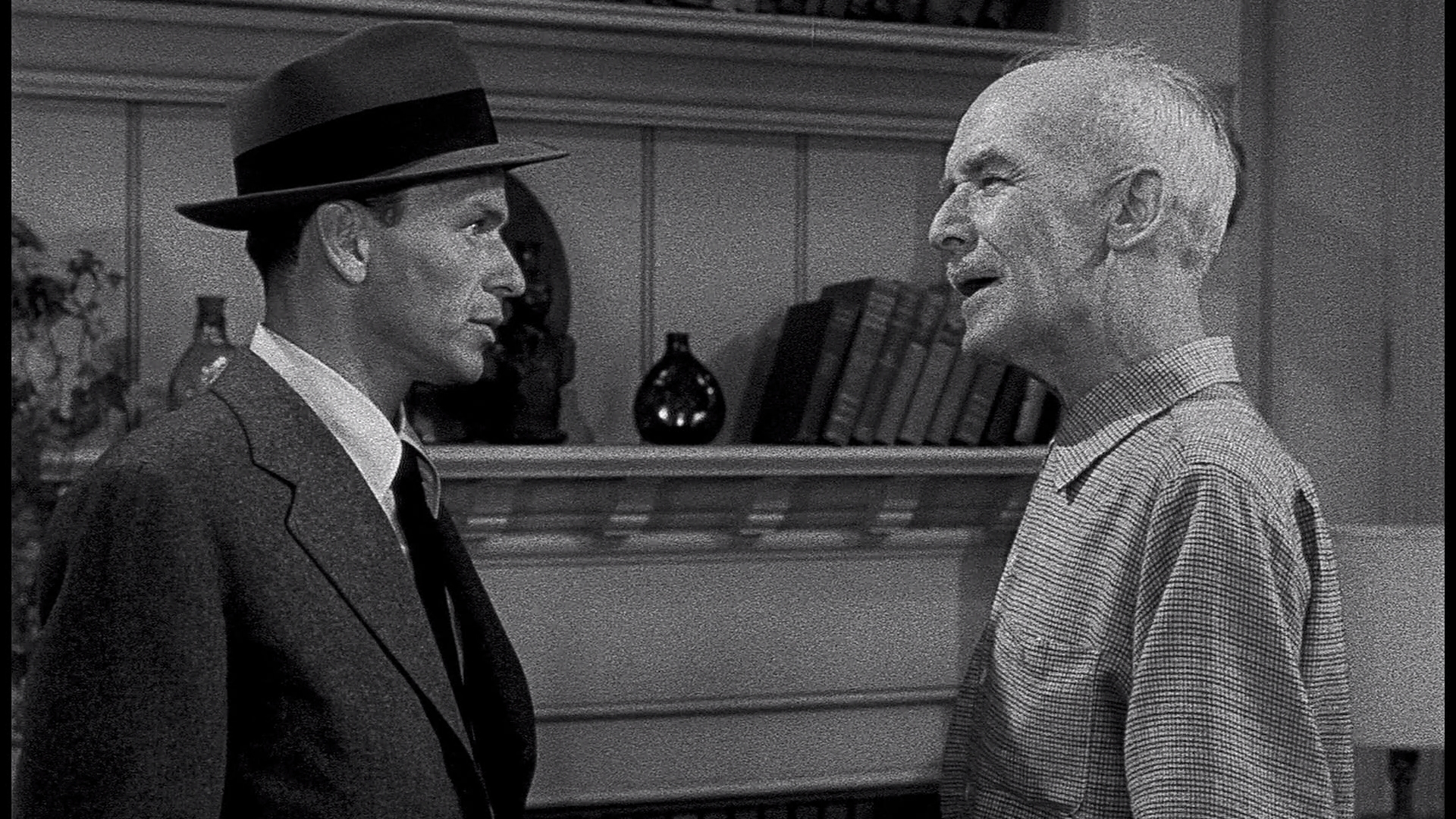 Niche distributor The Film Detective issues one of their most important Blu-rays yet in Suddenly. Having slipped into the public domain, two other companies including Image Entertainment had taken a crack at issuing the movie on the format. Those two releases were both open-matte transfers framed at 1.33:1.

For the first time ever on Blu-ray, The Film Detective has struck a new film transfer from solid elements at Suddenly’s theatrical 1.75:1 aspect ratio. This is a strong presentation of a black-and-white film caught in the public domain. Before this release most had considered the Image Entertainment disc the best choice for Suddenly. While the open-matte option is interesting, this nearly widescreen version is the preferred choice when properly watching the film.

Like all their releases, Suddenly is in fact a BD-R. Made on demand when you order it from Amazon, I’ve found The Film Detective’s BD-Rs reliable and professionally made. Only the disc’s playing surface gives away it’s not a replicated pressing like most BDs.

The 76-minute main feature is encoded in high-bitrate AVC that handles the thick grain and celluloid texture without incident. This is a watchable print that is fairly free of severe debris and damage. Some manual restoration is evident, sprucing the image up. The film-like 1080P video offers a consistent contrast with firm black levels. It is on the soft side but that is expected for what appears to be a modern telecine capture.

There is no obvious digital processing visible. Some analog halos are briefly seen but they are fairly small in amplitude. The secondary film elements used in the new transfer are replicated with appreciable texture and depth. While this transfer doesn’t have the tack and sharpness of a new scan from the negative, classic cinema lovers should like it a great deal as an authentic representation of the movie.

The monaural audio is heard in an excellent 2.0 DTS-HD MA soundtrack. Composer David Raskin’s score is a strongly melodramatic affair. Dialogue is perfectly intelligible and heard in crisp fidelity. There is a rich sonic quality to the audio rarely heard in films of this period.

The big difference between this Film Detective release and the previous two Suddenly discs are special features. They both offered unique commentaries and Image even threw in “N.Y., N.Y.: A Day in New York,” the 1957 short film by Francis Thompson.

This disc offers no special features at all. It does come in a standard Blu-ray case with the movie’s poster reproduced on the cover. The big lure for The Film Detective’s offering is the newly restored transfer at Suddenly’s correct theatrical framing.

Frank Sinatra stars in this riveting thriller as a ruthless presidential assassin.