It’s almost too easy to call Johnny Guitar the first feminist Western. Screen icon Joan Crawford plays a sexually liberated heroine standing on her own in the West. In fact, director Nicholas Ray’s 1954 film is one of the most radically subversive Westerns ever made. Decades ahead of its time, Johnny Guitar became a popular influence on the French New Wave in the 1960s.

Touching upon gender politics and an allegorical nod to the decade’s McCarthyism, it has only grown in stature over time as film critics discovered its underlying themes. Quickly forgotten in America upon release, Johnny Guitar was rediscovered in the 1970s by academic critics as a powerful piece of filmmaking. It’s the un-Western, celebrating an allegorical approach to storytelling that would have flown over the heads of its intended audience in the 1950s.

Joan Crawford stars as Vienna, the fiercely independent owner of her own saloon. Vienna is a former prostitute but foremost she’s a tough-minded businesswoman, having built up her own business in five years. Her saloon stands to handsomely benefit from the new railroad coming through town, if the townspeople don’t force her out first. Her nemesis is Emma Small (Mercedes McCambridge), a sexually repressed woman that irrationally loathes Vienna. Emma is the real villain of Johnny Guitar, the only caricature in a movie filled with fleshed out characters.

Notice how I haven’t brought up the movie’s supposedly central character, Johnny Guitar (Sterling Hayden). A guitar-playing gunslinger, Johnny Guitar would be the hero of this movie if it adhered to any conventional Western tropes. Vienna is this film’s real focus, a tough woman making it on her own in a man’s world. Johnny Guitar possibly still holds some love for Vienna, his former lover. He’s a gunslinger who can’t control himself near guns, so he’s given them up for his guitar. It’s possibly the first anti-gun message I’ve seen in an early Hollywood Western.

In a massive break from preceding Westerns, Nicholas Ray’s film introduces the first Western heroine that ends up cuckolding her current romance. There are romantic Westerns. This is not one of them; it’s almost an anti-romantic Western. Its gender and sexual politics would have been shocking to Western fans in the 1950s, which possibly explains the tepid reaction to Johnny Guitar by American audiences.

This is a movie ripe for Freudian analysis with its emasculated male characters. The movie is almost a perfect embodiment of William Moulton Marston’s philosophy, popular in some circles in the Forties for espousing women were superior to men and had more power. People may have heard of his most famous creation, Wonder Woman.

Vienna has a thing going with the Dancin’ Kid (Scott Bradley), an outsider and newcomer to the town. He’s also the leader of a small gang, branded outlaws by the suspicious townspeople. Vienna is guilty merely by association, nicely paralleling some of the Red Scare seen in Hollywood during the McCarthy era. Possibly hoping to rekindle their former passion, Vienna invites Johnny Guitar to her saloon, supposedly for a guitar-playing gig. What ensues is a dramatic conflict between Vienna and the town’s posse, looking to hang someone after a stagecoach is robbed.

Johnny Guitar subverts practically every Western trope in both style and substance. Nicholas Ray beautifully crafted the film around an inversion of the usual Western themes and iconography. The town’s posse, normally the moral arbiters of justice in most Westerns, wear black as the villains. The allegorical themes get heavy handed at times but no one can dismiss Ray’s beautiful craftsmanship.

Johnny Guitar is like no other Hollywood Western seen before the 1970s, when a new generation of younger filmmakers would break free from the standard formula for a more revisionist approach. Thoughtfully constructed around a sexually liberated heroine in Vienna versus a repressed female antagonist leading a witch-hunt, Johnny Guitar is powerful filmmaking for its day. Film legend Joan Crawford was born to play Vienna, delivering her sparkling dialogue with the fire expected of a major Hollywood icon. 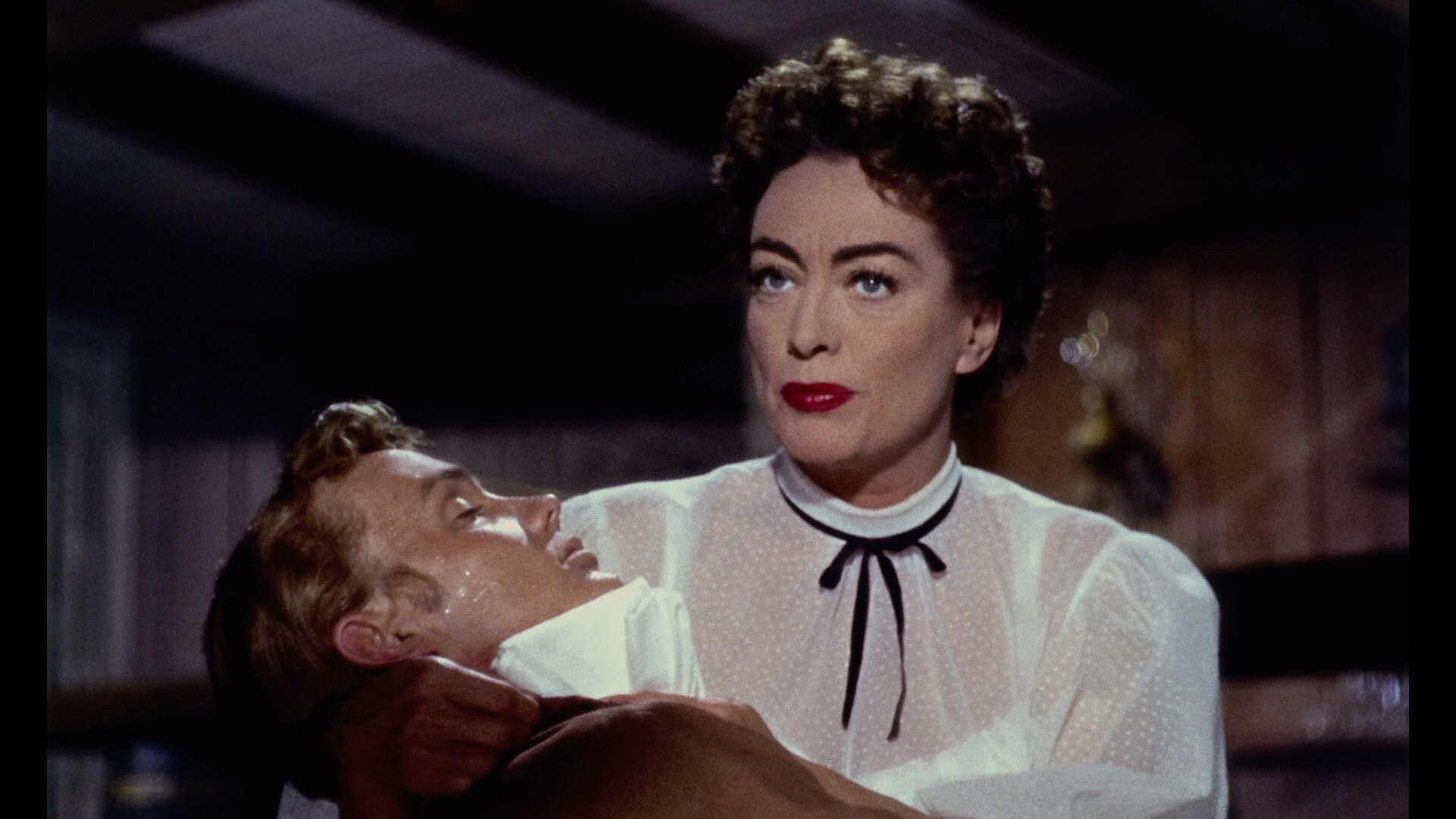 Olive Films releases their finest transfer yet in Johnny Guitar’s new Signature edition and it’s a beauty. A new 4K film scan from the original negatives has produced gorgeous results in this wonderful restoration. This is some of the most colorful, stunning picture quality seen from a Western made before the 1960s.

The 110-minute main feature is presented at 1.66:1. The extremely high AVC video encode is perfectly transparent without artifacts, included on a BD-50. Olive Films and Paramount deserve kudos for giving us this transfer on Blu-ray. It makes the original Blu-ray of Johnny Guitar look obsolete by comparison.

The film elements have been carefully restored to immaculate condition. Crisp texture, strong detail, and sharp definition give Johnny Guitar an extremely faithful presentation. This new transfer also boasts some of the finest color timing work I’ve seen on vintage film. Johnny Guitar was filmed in Trucolor. Trucolor was a color motion picture process used and owned by Consolidated Film Industries mostly for its Westerns, a division of Republic Pictures. Its vivid color saturation and accurate flesh-tones come to life in this 1080P video.

The cinematography offers masterful composition. Ray had a background in architecture and his work has a strong sense of geometry and space. Lit in that clean Hollywood style of the classic studio era, the Western was consciously made brighter with a deeper palette. The consistent contrast and superb black levels are pitch-perfect for this material.

This signature edition boasts one of the best-looking 4K transfers on the market. A small touch of processing doesn’t affect the video’s inherent detail, leaving a beautifully film-like presentation loaded with high-frequency content. Some scenes project outstanding depth and dimension for any era, much less a 1954 production. This is must-see quality for vintage film lovers and a new reference standard for older Westerns.

What a soundtrack! On par with the magnificent video restoration, the restored monural audio is heard in fantastic 2.0 DTS-HD MA. Featuring a classic score by noted composer Victor Young and a title track sung by 50’s star Peggy Lee, the fidelity is amazingly clean. Nice dynamics, smooth highs, and tight dialogue – you won’t believe this soundtrack was recorded over sixty years ago. It’s the stuff of audiophile nirvana.

Olive Films has been tentative in spending much effort on special features for most of their releases. They’ve clearly gone the extra mile for this Signature Edition, loaded with new special features and classy packaging. The label is definitely stepping their game up in a hope to compete in the increasingly crowded premium Blu-ray space.

The clear Blu-ray case, copying Twilight Time’s clear cases, arrives in a snug slipcase. A color booklet with critic Jonathan Rosenbaum’s essay “Johnny Guitar: The First Existential Western” is inside. It’s a nice set that doesn’t take up much room.

Audio commentary with critic Geoff Andrew – A solo commentary that goes into great depth on the movie and its underlying attention to detail. This is a tight, academic discussion of the film that offers excellent insight into Ray and his film.

Introduction (03:28 in upscaled SD) – Martin Scorsese offers up a fantastic encapsulation of the film in this older introduction.

Johnny Guitar: A Western Like No Other (17:29 in HD) – Critics Kent Jones, B. Ruby Rich, Joe McElhaney, and Miriam Bale discuss the film’s history and impact. Without the usual assortment of cast members and crew members, it’s a more academic, dry discussion than usual for these kinds of featurettes.

Johnny Guitar: A Feminist Western? (14:33 in HD) – Critics discuss the feminist themes within the film.

Tell Us She Was One of You: The Blacklist History of Johnny Guitar (10:23 in HD) – A fascinating featurette that includes an interview with a screenwriter actually blacklisted back in the McCarthy era.

My Friend, the American Friend (11:07 in HD) – Memories of Nicholas Ray as a filmmaker and teacher from people that worked with him.

Johnny Guitar: The First Existential Western – The text from critic Jonathan Rosenbaum’s essay. It’s identical to the one included in the booklet.