While a touch rotund in the narrative department and lacking the comic’s political bite, Captain America’s third go-round still pops with energy. The cast, as rounded up by Marvel/Disney, snaps together as an inherently perfect squad, leading to this sizable squabble. Cinematic serialized storytelling moves past its usual expiration date, yet here’s Civil War with all the pizazz and cautious progression as the Marvel cycle draws nearer to finality.

Marvel, criticized in recent years for their rather blasé visual style, doesn’t move away from that comfortable standard in Civil War. It’s a cooler film, thick with blues and pale flesh tones. Forget the saturation typical of superhero yarns – the overarching 20-some film storyline takes this series into a morose place.

This leads to movies of lesser visual impact, if still gifted with the clarity and energy of blockbuster cinema. Pleasing contrast coupled with rich (if slightly loose) black levels create enough visual power. Digital cinematography leaves no barrier to fidelity. The many aerials of worldwide locations show superlative resolution, arguably more so anything else. Civil War isn’t soft, rather those cityscapes have the benefit of vivid exterior lighting.

A rarity for Marvel/Disney Blu-ray, aliasing shows up early. It’s notable on Bucky’s suit as he’s seated in the chair during the opening prologue, then again during the UN meeting in Africa; some of the metal barriers break up as the camera pans down on the king’s speech. A few of spots of noise creep in too, although those digital artifacts make for a vapid complaint.

It’s all the best elsewhere, with rich facial definition and superior texture. When Spider-Man makes his appearance, the zoom towards his face is a rapid reveal of each stitch. All of this goes for Captain American, Iron Man, and the others too. 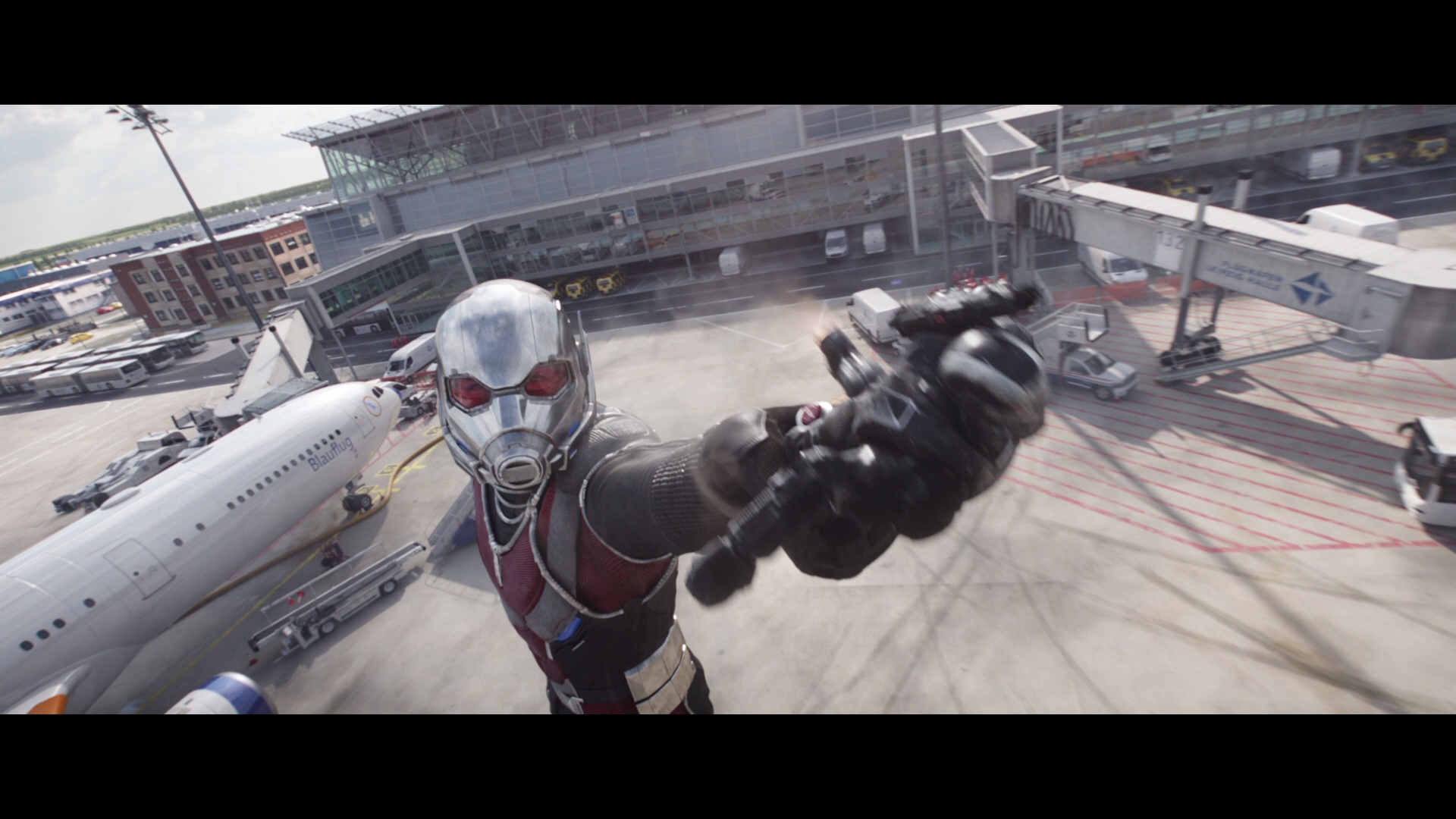 Pristine channel separation finds a way to grow as the film goes on. A stairwell brawl sounds fun – punches and kicks thrown around the soundfield, with sprays of gunfire panning around the rears. Then comes a tunnel chase, panning vehicles and honking horns heard in each speaker. Still better is a helicopter crash then the airport clash with flying superheroes jetting around. It’s the best sonic Spider-Man realization too. His quips travel with him through the soundstage.

A slight letdown comes from the LFE, not as hearty as in say Ninja Turtles: Out of the Shadows, but not aggressively overdone either. The caution employed early means Ant Man’s oversized footsteps carry more weight later. The airport battle wakes up the subwoofer for overtime, flushed with explosions extending deep into the low-end.

Why the key making-of spits into two parts isn’t clear. Both pieces of United We Stand, Divided We Fall run around 23-minutes and they directly connect to each other. As a Marvel bonus feature, it’s fine, but also strong in its promotional value. Captain America and Iron Man take individual bonuses to chart the path of their characters leading up to this movie in two Road to Civil War featurettes. Four deleted/extended scenes come up for grabs, and a fun little gag reel has moments. Those looking for commentary will find a track from the directing Russo Brothers, joined by writers Christopher Markus and Stephen McFeely.