Kickstarted into existence by the Back to the Future fanbase, Back in Time digs into the lasting zeitgeist left by the time travel trilogy. An introductory chapter zips through inside stories of Back to the Future’s production – most already known, if necessary for context – before setting up a second chapter it never leaves.

Robert Zemeckis, Michael J. Fox, Steven Spielberg, Bob Gale and other critical Back to the Future alum feature throughout Back in Time. The documentary digs further, picking up interviews with Huey Lewis and other bit players. Studio executives follow their own involvement, setting up a narrative of this unlikely time travel movie. Bob Gale teases the famously unseen Eric Stoltz/Marty McFly footage while it remains buried in an archive.

From there, focus wavers. Back in Time plows through topics, loosely fitting in conversations about flying car technology and real world hoverboards. Later, Back in Time films miniature golf tournaments during another kind of/sort of Back to the Future related segment. Restoration experts and prop enthusiasts fawn over the Delorean, criss-crossing through the often directionless Back in Time. 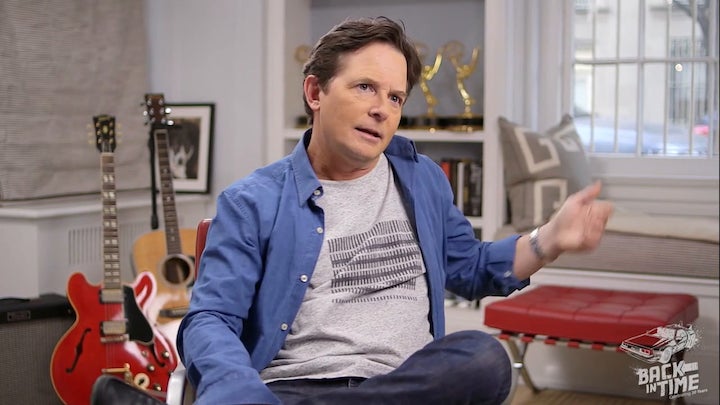 Sloppy, even messy, the honest message of Back to the Future’s impact only sort of comes through. The fandom is earnest in their love of this trilogy. Peeking in on the convention scene or even living rooms, the movies catapult beyond their existence as nostalgic ‘80s movies. Cover bands and companies who build entire set replicas capture the unusual specialties of Back to the Future’s cleverness.

It’s a mistake… to dangle Back to the Future as if the film’s legacy comes only from a specific subset of ‘80s boys.

The predominantly white male fanbase doesn’t speak to any broader legacy of the series though. The recent Ghost Heads, which pulled the veil down on Ghostbusters pre-reboot, found women absorbed in the fandom. It’s a mistake, nearsighted even, to dangle Back to the Future as if the film’s legacy comes only from a specific subset of ‘80s boys who attach tightly to their childhoods. Back in Time is then lackluster and contradicting of its own cultural thesis.

Swooning for nostalgic purposes isn’t trendsetting or different. Whether it’s the timeframe of the ‘80s generation or something else, the decade clings to pop culture. Back in Time, cool as it is to see Delorean’s restored, speeds through any significance. People discuss the script’s perfection, they gawk at the awkwardly incestuous plotline, and fawn over future tech, but Back in Time doesn’t explore anything beyond. The movie suggests ideas more than it substantiates them.

Back in Time finishes with discussion of a fourth movie. Bob Gale and Zemeckis shoot the idea down. Paraphrasing, they accept the one-off nature of their film’s lightning-in-a-bottle quality. Their story completed comfortably as a trilogy. It’s fans who keep Back to the Future around. A shame that Back in Time doesn’t hook onto the fandom as anything other than commercialized childhood sentimentality.

Full disclosure: This movie was provided to us for review. This has not affected the editorial process. For information on how we handle review material, please visit our about us page to learn more.

Tapping into the behind-the-scenes production details of Back to the Future, Back in Time changes course and then loses its momentum.