For two seasons, every episode of The Flash opened on a lie. Barry Allen is not the fastest man alive, much as his stirring, bold intro narration wants to believe otherwise. Someone is always faster because there’s no show otherwise.

Still bonkers, still wild, and still indebted to anything-goes storytelling, season two of CW/DC’s kinetic escapism juts ahead with force. Embracing everything about the golden age of comics with a strip of high technology/geeky science running through the center, the show wily throws entire speeches worth of exposition at its audience without fear. A regular set-up involves the villain of the week while the (somehow) well-funded team of STAR Labs tosses out solutions. Flash recalls the formula of Fox’s doctor drama House – with a telepathic monkey and land dwelling mutant shark instead of Lupus.

Near childish but hooked on the rings of authentic drama, it’s character which elevates Flash. The wild, even irreverent treatment of logic bleeds into all DC TV (transforming Arrow almost entirely). Without Grant Gustin’s sure headed Barry Allen or Cicso’s (Carlos Valdes) pop culture encyclopedia in tow however, Flash is nothing. With season two, there’s growth. Tom Cavanagh returns, meaner, but with a stronger arc to carry him through arguably too many episodes.

Flash chokes here and there. Filler episodes remain the bane of serialized television, part of the old guard dictating more than is necessary for ad revenue. The less said for an ignored Supergirl cross-over the better. So too go familiar plot threads. Allen continues his romantic chase for Iris (Candice Patton) and Flash confronts another identity-less super villain with multiple personalities (sort of) in Zoom.

But, Flash’s leisurely tone and snappy comedic core override those grievances. It’s a show inundated with over-the-head science and multiple criss-crossing planets full of stories. Underneath sits Barry’s problems, a superhero emotionally burdened and hurt. By the finale, grief upsets his typically reasoned crusade for right. It’s exciting and pure, flushed with intelligent writing which suggests the writers pay attention to details, no matter how insignificant they seem. Two seasons in, if this continues as is, Flash may take over Marvel’s own as the best superhero property on film or TV. 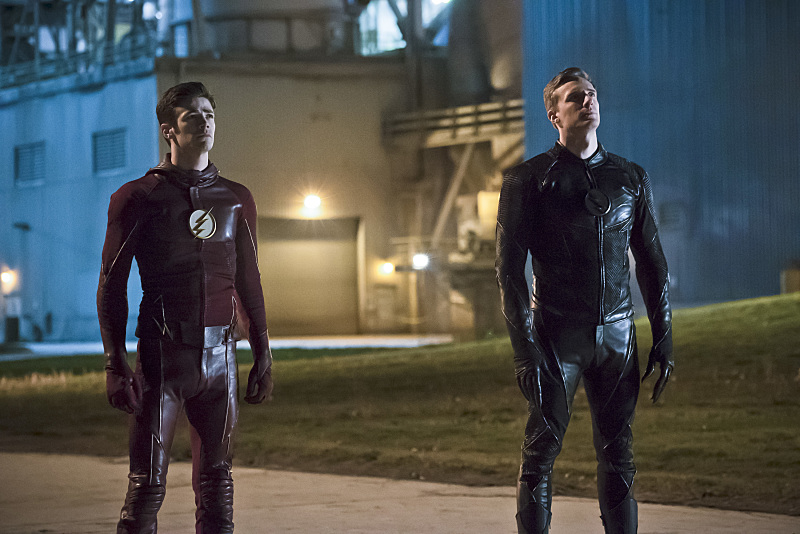 In years of doing this, it’s never less of a surprise to jump from cable to Blu-ray. Call it the inadequacy of broadcast compression or the breathing room of the disc format. Either way, the gains in fidelity, clarity, and sharpness add life to this show. Close-ups take on more weight and resolution bumps are high enough to read otherwise obscured details on the STAR Labs’ many LCD screens.

Critical black levels give Flash depth, and they do so without taking away shadow details. Critical nighttime brawls and many interiors of the West’s home require such an effort. The STAR Labs lighting scheme focuses heavy light sources to enhance contrast, creating a consistent light/dark motif for much of the show. It’s attractive.

Warner crams a lot on each disc, with 23 episodes on four discs with a bunch of extras. The consistent issue is noise. Although rarely an impediment to fine detail, having it in the background or buzzing around a light source makes this hard to ignore. In terms of compression, this is unlikely a Warner problem. The studio struggles at times, but this isn’t representative of when things go wrong for them.

Mixing isn’t as careful as feature films, yet when speedsters take off, they track flawlessly between channels. Cisco’s vibe ability creates whirlwind effects. Any use of superpowers free themselves of the center as needed. Fun stuff.

A handful of things remain consistent between discs. Each carries a handful of short deleted scenes, two or three per. VFX reels breakdown the CG, a few of these going deeper into the process. Characters specific to the episodes on the individual discs get rundowns about their inclusion. These last between four and seven minutes each, from King Shark, Zoom, Trickster, to Lewis Snart.

Disc one holds the best gag reel, not for the goofs, but the spoofs. It opens with ‘90s Flash intro recut to include Grant Gustin and company. A nod to Wil E. Coyote is better still in this lengthy 12-minute collection. Into the Breach peeks into the awesome art deco design of Earth 2, while a featurette on Jay Garrick’s helmet fits into the same mold. A 7:35 focus on Barry and Iris’ relationship leads in the menu.

Fun continues on disc two with screen tests and two features connected to Arrow – Vandal Savage and Hawk Girl both earning separate 11-minute featurettes. The mid-season Christmas special breakdown is fun too. On the third disc it’s convention time. Cast and crew unite for a half hour Paley Center chat and all 15-minutes of the 2015 Comic Con panel are here.

Kevin Smith directed an episode this season which leads into the set’s highlight. Chasing Flash details the involvement of Smith, from producers discovering the director’s Flash obsession to the process itself. Longer than most episodes at 51:40, Chasing Flash bests anything else on the discs. The only thing missing on any episode is a commentary.

Overlong or not, The Flash continues into a successful, wildly fun second season where stronger characterization and higher stakes win out.

Note: Due to Warner’s latest DRM, we are unable to provide screen shots for this season.