While showing progress, this see-it-and-forget-it sequel languishes under the weight of its many ideas. The worldwide adventure cannot find footing. Introductions of key characters in Turtles lore compares to rushed fan service and exposition-laced dialog painfully points out the obvious. Far too hectic camerawork never settles, either. Toned down in violence and weaned from the first film’s pitiful sexualization, there’s a promising series somewhere under the weight of the hyper-active style.

Read our previous full review of TMNT: Out of the Shadows for more.

Few surprises are incoming for those who viewed the first rebooted Turtles movie on Blu-ray. Lots of color in this one, taking on a neon-like saturation. Turtle green pops and various light sources spread primaries all around. Although drifting in and out of darkness (or shadows, if you prefer), saturation holds firm. Helped by set design, the variety of color is especially notable.

Although too easily fading into a digital haze, black levels establish their dominance. Uber deep shadows take just a hint of detail with them. Those few drops in density – prevalent during the Turtles’ first meeting with Casey Jones – take a bit of power but overall, Out of the Shadows works overtime on depth.

Megan Fox, as with the first Turtles, comes on screen only after a round of digital smoothing.

Spots of noise exist throughout. Ranging from heavy to minimal, digital artifacts stay controlled with little impact. Out of the Shadows layers on clarity and resolution. Since an enormous portion of this movie completed under the guidance of visual effects, “live” action often isn’t. That means watching a pristine, photo real fight with all of the texture and fidelity available to modern effects. Turtle scales, sweaty rhino skin, immense city exteriors, and even a jungle mash together a wonderfully eye-popping visual scope – Michael Bay without Michael Bay behind the camera.

Pair this with an intense, heavily lit contrast and Out of the Shadows performs admirably. Yet, there’s a stickler. Megan Fox, as with the first Turtles, comes on screen only after a round of digital smoothing. While other close-ups revel in high-end definition, Fox stands out for the wrong reasons. Laura Linney, too, went under the digitized de-marking process. The women appear as dolls rather than people, but to no fault of the Blu-ray as Paramount’s encoding is a winner.

There are scenes in the 3D presentation which push hard depth. Cue up the intro jaunt through New York, the airplane-to-airplane battle, or even the finale. Without resorting to gimmickry, the disc sets up rich dimensionality, forcing the issue by paying attention to foreground/background action. Out of the Shadows is a rare conversion where 3D earned consideration in-camera beforehand. This includes a handful of poke-at-the-screen elements, cheesy and fun in their own throwback-ish way. Krang especially juts forward from his robot body, practically acknowledging the camera.

Forceful as those action moments are, the rest slinks back into the format’s typical blockbuster treatment. Don’t take chances, be wary of breaking the front plane. Fall-in work from within the lair doesn’t establish the full breadth of the space. Other dialog locations follow suit, along with some action scenes too. It’s clear where the effort went.

An absolute showcase for HDR effects, New York bathes itself in intense light sources. City views stun with their brightness, and throughout, scenes utilize the additional zest of the tech to show off. Some black crush remains despite better shadows. It’s almost certainly a remnant of visual effects hiding some detail. That’s fine – image depth is top tier.

Don’t expect a fidelity boost over the Blu-ray. Mastered 2K, while texture is a smidgen better, the boosts here remain contrast and depth. Also in line for improvement is color, besting the standard disc with wonderful, slightly exaggerated saturation. The variety of green on the Turtles pops in this presentation. Better management of noise leaves behind nothing other than clarity. 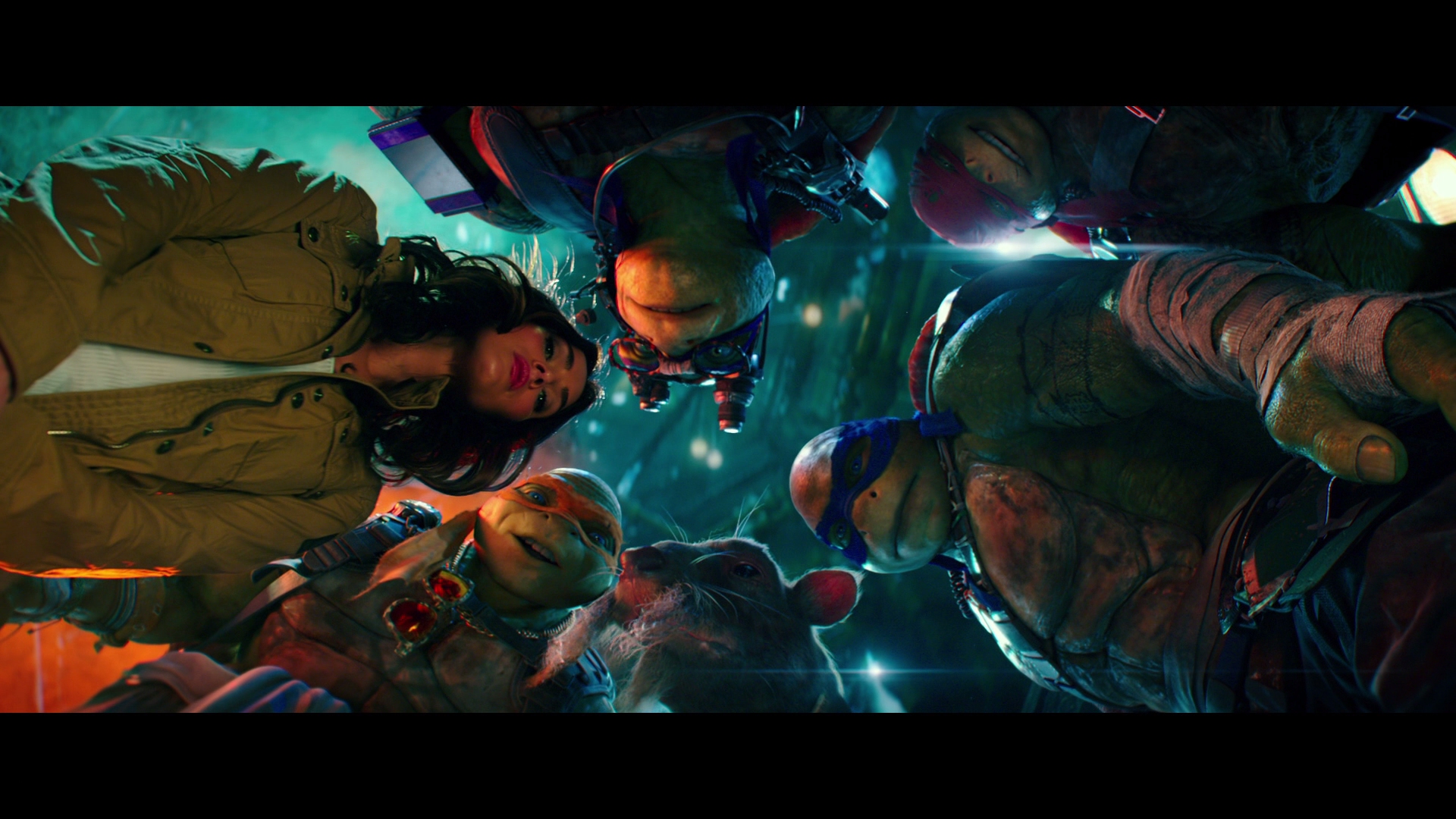 A portal closing in the final moments creates an absurd jolt of bass. If what came before sounded heavy and thick (and it is) this blast reminds you of how strong things can be. As the Blu-ray blockbuster season kicks up, Out of the Shadows will stay a standout. The sheer amount of LFE support – and its quality – secures this disc’s spot.

This isn’t only a case of the subwoofer in the lead. Spectacular support for surrounds and stereos in this TrueHD 7.1/Atmos mix provide the precision elements. Each big action scene creates plentiful debris in all directions, beginning with a car chase. Vehicles pop up in each speaker, rushing through the channels with superlative accuracy. Dialog spreads too, as needed. Come time for the Technodrome, pieces flawlessly swirl around as they pass by.

Brief and typical are words defining the bonus menu, with a few winners. Opening rounds go to We Are Family where the the Turtles’ motion capture actors receive their due. House Party earns points too, dissecting the sewer lair’s production design. These details are great, if unseen in the movie. Likewise, Inside the Van does the same, but with the truck/van. The first live action April O’Neil, Judith Hoag, makes a cameo in one of three deleted scenes. It’s downhill from there.

Exploring the Turtleverse slips into useless plot/character recap. Did You Catch That supposedly reveals easter eggs, but points out obvious things (the eye on the Technodrome? Really?). ILM’s credit comes during a live pass through the visual effects, a three minute reveal showing their techniques. Total everything up to reach 40 minutes of content.

While suitably out of control, the egregious script and slim character leaves Out of the Shadows wanting for more, even if it’s an improvement.