Tangled in the Vines

While on its computer generated overdose, Jungle Book robs itself of character. Worse, Jungle Book straddles the concept of live action all together. Capable first timer Neel Sethi’s Mowgli performance gives Disney’s update the only human touch. Odd for such an inherently organic fairy tale.

This is no insult to special effects artists, who at times, invisibly build full jungles around Mowgli. Baloo’s fur shimmers in artificial sunlight. Motion capture artists breathe words into animals incapable of speech. The technical fluency of such a production reaches unparalleled proportions. While contemporary films rarely earn accreditation as “ground breaking” any longer (cite general sameness in techniques or an admitted audience cynicism since the veil raised on CG) Jungle Book deserves praise.

A new generation’s Jungle Book then, flashier, faster, and less reliant on the puffy charms of Walt’s own hand.

Underneath remains a story of identity and finding ones self, disassociating from Rudyard Kipling’s political insinuations for something nearer to Disney’s 1967 adaptation. A new generation’s Jungle Book then, flashier, faster, and less reliant on the puffy charms of Walt’s own hand. More immediate and heavier on the fear is this one too, partly due to its format.

“Typical” seems a harsh designation, if not incorrect. Disney’s push toward adapting their classics with brutish, high-dollar effects in tow seeps into the production. Peek at Jon Favreau’s directing credit and it’s the only tell of his involvement. Less a director’s film than one led by mountains of artists until all identity is lost, this Jungle Book retelling desperately needs personality.

Again, blame the methodology. Where 1967’s Baloo primarily came from singular pencil strokes of a singular artist from a more singular abstract design vision, 2016’s collects the minds of hundreds, animated by hundreds all to produce… a bear. A talking bear which exists in the utmost reality, preened and pruned in concept studios until absolutely pure. Remarkable as photo-realism is on screen, Baloo’s messages no longer carry the same identifiable charisma. Instead, his dialog and rhythms retreat into a less formed character than before. Doing more and extracting less – that’s not Baloo’s way, so it’s hard to see this as Jungle Book. 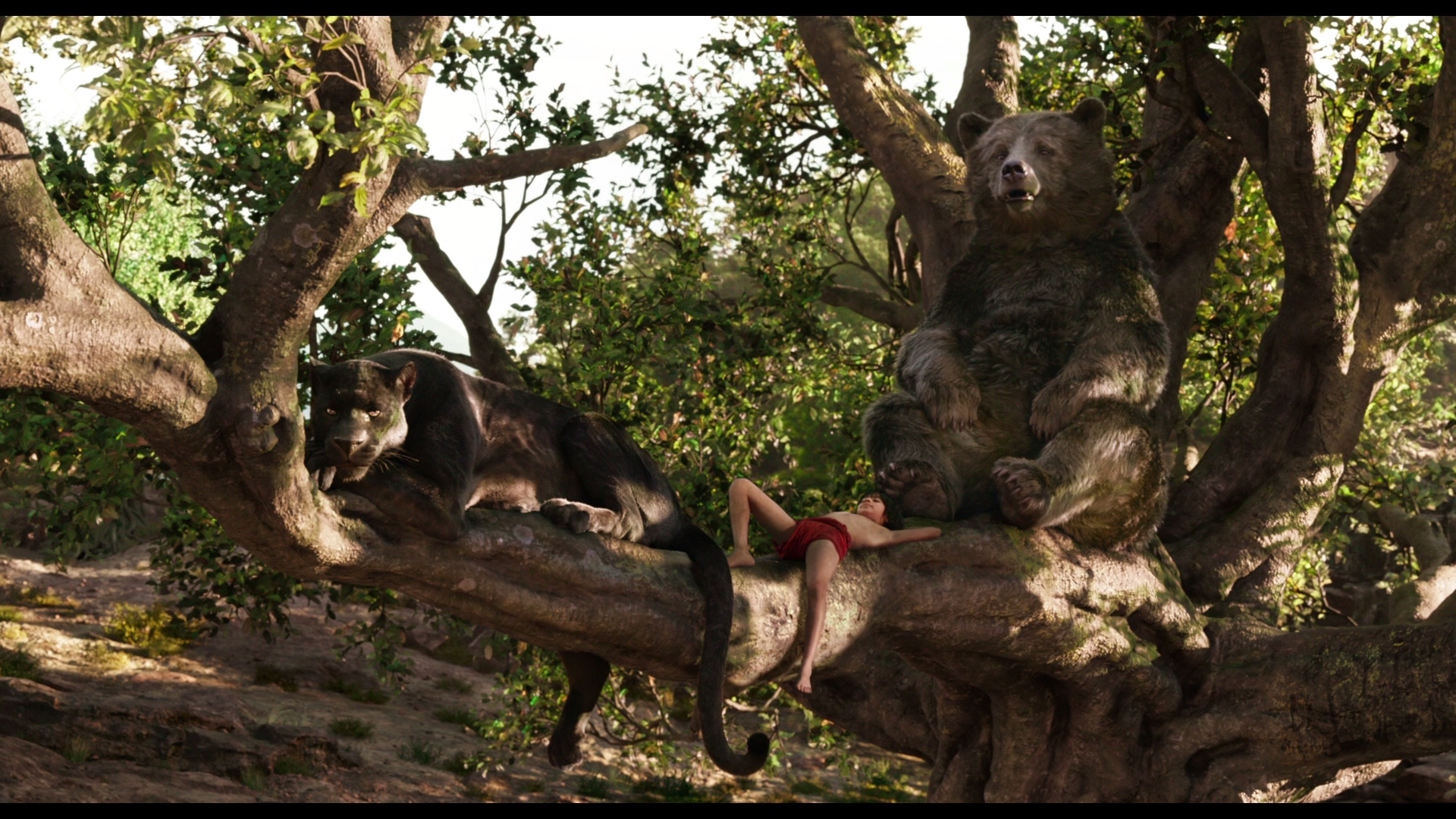 In the hunt for special effects progress, the visual end takes an interesting hit. Noise pops up within the CG animals and environments. While rarely aggressive, some impact is noted. During a trip on a foggy river, the background buzzes. Excellent compression alleviates the worst symptoms.

It’s stated each frame of Baloo took five hours to render. The cost comes in resolution. The finest of details struggle to make themselves known. Compared to CG animals in other films (say, Life of Pi), their appearance in Jungle Book wanes in clarity. Inconsistencies sprout up scene-to-scene while as a whole, the film loses its edge at the source.

Shy of earning top marks, Jungle Book’s effort will disappoint only those expecting top tier material. Most will find themselves satisfied with the combination effect of color/contrast alone.

On the flipside, Disney’s decision not to release this on 3D Blu-ray is a terrible one.

Throw away any issues with the video. Immediately active, the DTS-HD 7.1 track rushes into success. An awesome chase sequence begins by bringing the jungle alive and tracking Mowgli’s movement. Aggressive camera work matches to the audio. Rain, thunderstorms, stampedes; they all work to elevate the sound mix.

Especially great is Kaa (Scarlett Johansson) who slithers around the soundfield as her voice bounces between surround channels. Other voices separate the stereos to create fine dimension into the front soundstage.

Bigger impact comes from a mud slide and temple collapse, two scenes which crank on the bass to give them mass. A touch of fire nicely pulls everything together for the action finale.

Few studios give attention to their bonuses anymore, so kudos to Disney for their exceptional production values and style. The 35-minute Jungle Book Reimagined sits director Jon Favreau down with his producer and special effects lead for a roundtable, intercut with set footage and other interviews. I Am Mowgli peeks into the casting process and allows Neel Sethi full control of the camera’s time to discuss his role for eight minutes. A vivid, multi-faceted live breakdown of a key scene features in King Louie’s Temple: Layer by Layer. Favreau’s enthusiastic solo commentary is a nice cap to the disc.

While directed by Jon Favreau, this adaptation of The Jungle Book is never identifiable as anyone’s work and drowns in its effects.