When the CW announced DC’s Legends of Tomorrow, spun off from their hit shows Arrow and The Flash, fans got excited. Superhero fans love nothing more than seeing their favorite heroes team up with other heroes, especially as they battle villains in high-stakes action. Some of the network’s most popular and beloved episodes had already involved crossovers between the Flash and Green Arrow. The promise and excitement of bringing an actual superhero team to television created immense buzz. In the wake of the Avengers’ massive success on the big screen, it smelled like a winner.

Developed by producers who already proved themselves adept on the CW’s other DC superhero properties, Legends of Tomorrow seemed like a surefire hit. Promised as sixteen episodes telling a fully developed narrative, the show would include such heroes as the Atom (Brandon Routh), White Canary (Caity Lotz), Firestorm (Victor Garber and Franz Drameh), and Hawkgirl (Ciara Renee) fighting together on the same side. It would even include a couple of reformed villains in Captain Cold (Wentworth Miller) and a surly Heatwave (Dominic Purcell) on the team. Sure to include other surprise appearances by recognizable DC superheroes and villains, everything was lined up perfectly.

Something goes wrong along the way in this first season, preventing the CW series from hitting its full potential. While DC’s Legends of Tomorrow does have its moments (there is a crazy giant robot fight late in the season that has to be seen), hardcore fan reaction was decidedly mixed as the season developed. What should have been immense fun is hampered by odd character development and ham-handed plot twists.

Doctor Who’s fans should be pleased by DC’s Legends of Tomorrow. DC comic book character Rip Hunter, a time traveler and the central figure of the series, is heavily modeled after the good Doctor on the show. They even include a talking computer assistant for Rip. It was a bone of contention for me since Rip Hunter has been around decades as a character in DC comic books with a fairly rich legacy of his own.

There was no one more excited for DC’s Legends of Tomorrow than myself when it was first announced. As someone that loves DC comic books and their superheroes, it was a concept I could only have dreamed about merely ten years ago. A team of familiar comic book superheroes fighting DC super-villain Vandal Savage across the timestream? It’s the stuff of fantasy for comic book fanboys. That fantasy faded after it became apparent the show’s ambitious storytelling couldn’t really deliver on its initial promise. It’s still decent television but not the stuff of legend, to borrow a phrase from Rip Hunter himself.

Renegade Time Master Rip Hunter (Arthur Darvill) travels back in time from the future to our present, where he assembles a rag-tag team of DC comic book heroes and villains. Its sole purpose is stopping the immortal villain Vandal Savage from conquering the world in Rip Hunter’s own dystopian future. Rip’s team includes a number of familiar characters from Arrow and The Flash, including the full-time return of actress Caity Lotz to the Arrow-verse after her character Sara’s untimely death. Rip pilots the Waverider, a spaceship capable of time travel. It’s the de facto home for our group of heroes as they travel between time periods, battling Vandal Savage across history.

Are there enough nods to make DC’s comic book fans happy? Yes, everything from Jonah Hex in the Old West to a devastated Star City in the near future are highlighted in episodic jaunts. While the series isn’t slavishly devoted to their comic book counterparts like sister show The Flash, most serious fans will find it a fairly authentic trip through the DC universe’s established timestream. Destinations include ancient Egypt to the London of 2166.

If half of what I’ve written in this review went over your head, don’t worry. Casual fans may actually enjoy DC’s Legends of Tomorrow more than knowledgeable superhero fans. Everyone will love Dominic Purcell’s gruff Heatwave (aka Rory) as he tags along with best pal Captain Cold (aka Leonard Snart). Wentworth Miller’s and Dominic Purcell’s established chemistry on Prison Break completely translates over to their characters on this show.

A few bumps in season one don’t undercut the sheer joy of seeing this many heroes together at once.

Brandon Routh brings a completely different, more heartfelt tone as physicist Ray Palmer. He brings the same easygoing charm he had as Clark Kent in Superman Returns to his turn as the Atom. Caity Lotz still credibly kicks more butt than any other actress on network television. With Caity’s character White Canary returning from the dead, she brings the same kind of intensity and emotion she brought to Arrow’s best season as Black Canary.

DC’s Legends of Tomorrow gets enough right in this first season to give me hope for its future on the CW. Season one isn’t perfect, often hampered by Rip’s confused leadership and some limited heroes’ powers for budgetary reasons. Firestorm, probably the most powerful superhero on the show, is frustratingly used in group fights. It’s clear his powers are often put on the shelf for both story and financial reasons, which is disappointing. Flash viewers will also complain that one-half of this Firestorm is played by a different actor, since actor Robbie Amell left the Arrow-verse to film movies.

While I initially cheered the selection of Vandal Savage as this show’s Big Bad for season one, Casper Crump’s one-note performance undermines the immortal character’s inherent coolness. Writing Vandal Savage into a love triangle with Hawkman and Hawkgirl was simply the wrong decision from the beginning. That character note feels out of place over the sixteen episodes as his driving force.

Like many first-season shows, DC’s Legends of Tomorrow is still working out its kinks. A few bumps in season one don’t undercut the sheer joy of seeing this many heroes together at once. There are enough highlights and fun set pieces to make it worthwhile viewing for most fans. A shorter season of six to eight episodes, the original idea behind the series, would have likely been better and more entertaining. Let’s hope season two sees tighter storytelling and smarter characters. 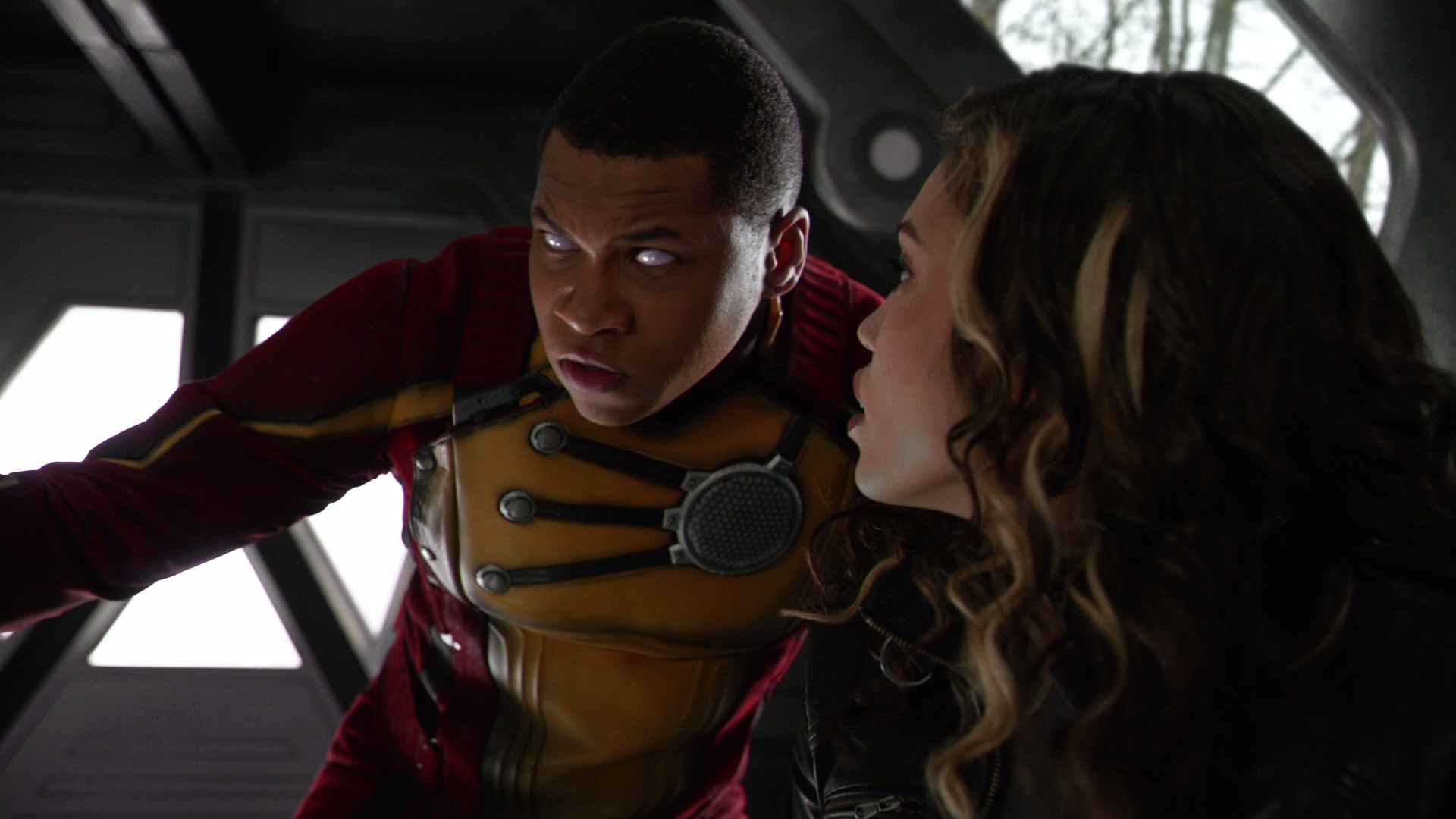 Warner Bros. properly presents DC’s Legends of Tomorrow in bright, glossy 1080P video that surpasses its original CW broadcast. Sixteen episodes are spread over two BD-50s, squeezing the AVC compression rate typically below the teens. This is clean, crisp picture quality shot for clarity and pop. While some softness is introduced due to various CGI effects, this is a sharp 1.78:1 presentation.

The digital cinematography is definitely made for network television. The contrast and color saturation are outstanding, highlighting strong detail. Aside from a few of the darkest, murkiest scenes, shadow delineation and black levels are impressive.

The only nagging flaws in the pristine video are minor compression artifacts, when the hectic action and CGI become too much for the low-bitrate AVC video.

The 5.1 DTS-HD MA soundtrack has an active surround mix with shocking presence and impact for television audio. From Blake Neely’s powerful score to the quietest dialogue, the sound design is on point. Featuring clean fidelity with a spacious soundstage, everything is thrown at the listener in a dense audio presentation. Smooth bass and sparkling clarity deliver an impressive sonic punch that takes full capability of 5.1 home theaters. This is outstanding surround audio on par with major theatrical fare.

The two-disc Blu-ray set for the entire first season comes in a snazzy slipcase. WB provides a UltraViolet digital copy that redeems in HDX on VUDU and other UV service providers. A small episode guide is included as an insert.

All of Berlanti’s DC superhero shows tend to have a wide array of special features. DC’s Legends of Tomorrow gets a fairly standard assortment if you’ve bought Flash or Arrow on Blu-ray. There are fewer appearances by the cast members this time as producers Marc Guggenheim and various crew members fill the void. Noticeably missing are any deleted scenes.

A Fantastic Voyage: Touring the Waverider Set (08:57 in HD) – The primary setting for Rip’s team as they travel through time, various crew members discuss their approach in the ship’s genesis and construction.

History in the Making (13:04 in HD) – This featurette details the ornate production design that went into creating each specific time period seen on LOT, from the Old West to the far-flung future. The detailed production design didn’t cut corners visiting various locales.

Jonah Hex: Hex Marks the Spot (06:59 in HD) – A brief history of the DC comic book character and his appearance in episode eleven is covered. Guest actor Johnathan Schaech talks about playing the Western character.

DC’s Legends of Tomorrow: 2015 Comic-Con Panel (18:49 in HD) – A glib discussion by cast and producers before the season aired.

The CW’s shiny, new DC team show is still a work in progress in this uneven first season. Superhero fans should give it a try.