It’s strange. Ratchet & Clank isn’t challenging at its core. The game tie-in remains a better entry point with the same story threads. Aiming young, the story of lonesome, excitable space mechanic Ratchet turns into an embryonic space comedy with but a handful of successful gags.

A tale of fame and consequences, Ratchet’s journey minimally pokes a hole in celebrity culture. The theme of disappointment seems a downer, if only due to tonalities. Both protagonist and antagonist succumb to their wide-eyed optimism when gawking at their heroes. It’s clever, if constrained by length and oftentimes derivative action scenes.

Edging toward parody by acknowledging cliches in on-screen text, the film then chooses not to act on the self-aware sarcasm. That satirical core dangles in front of Ratchet & Clank, waiting to be used. This Ratchet & Clank is pedestrian though, unwilling to be contrarian.

Ratchet & Clank is sloppy and pedestrian, unwilling to be contrarian.

While adhering to the formalities of the buddy movie – Ratchet joins with intelligent but defective robot Clank in galaxy-saving adventures – their prowess as leads dwindles. By its conclusion, Ratchet & Clank insinuates their continuing adventures are a surprise, yet the lack of conflict between the pair leaves the audience with little doubt. An argument exists that ignoring the typical formula is a success, yet in context, the duo function on the same wavelength. Clank has brains, Ratchet has brawn. Yet, neither trait establishes their individuality, identities, or roles.

If there’s a success rate, it’s in design. Worlds flush with color and action scenes spit enough lasers to keep kids awake. All borrows from the videogame, where the series blossomed in a slew of energetic, chipper, and well formed good vs. evil stories. In conjunction with the identically named game, Ratchet & Clank’s reset didn’t need a theatrical movie at all. One of them is redundant. It’s not the game. 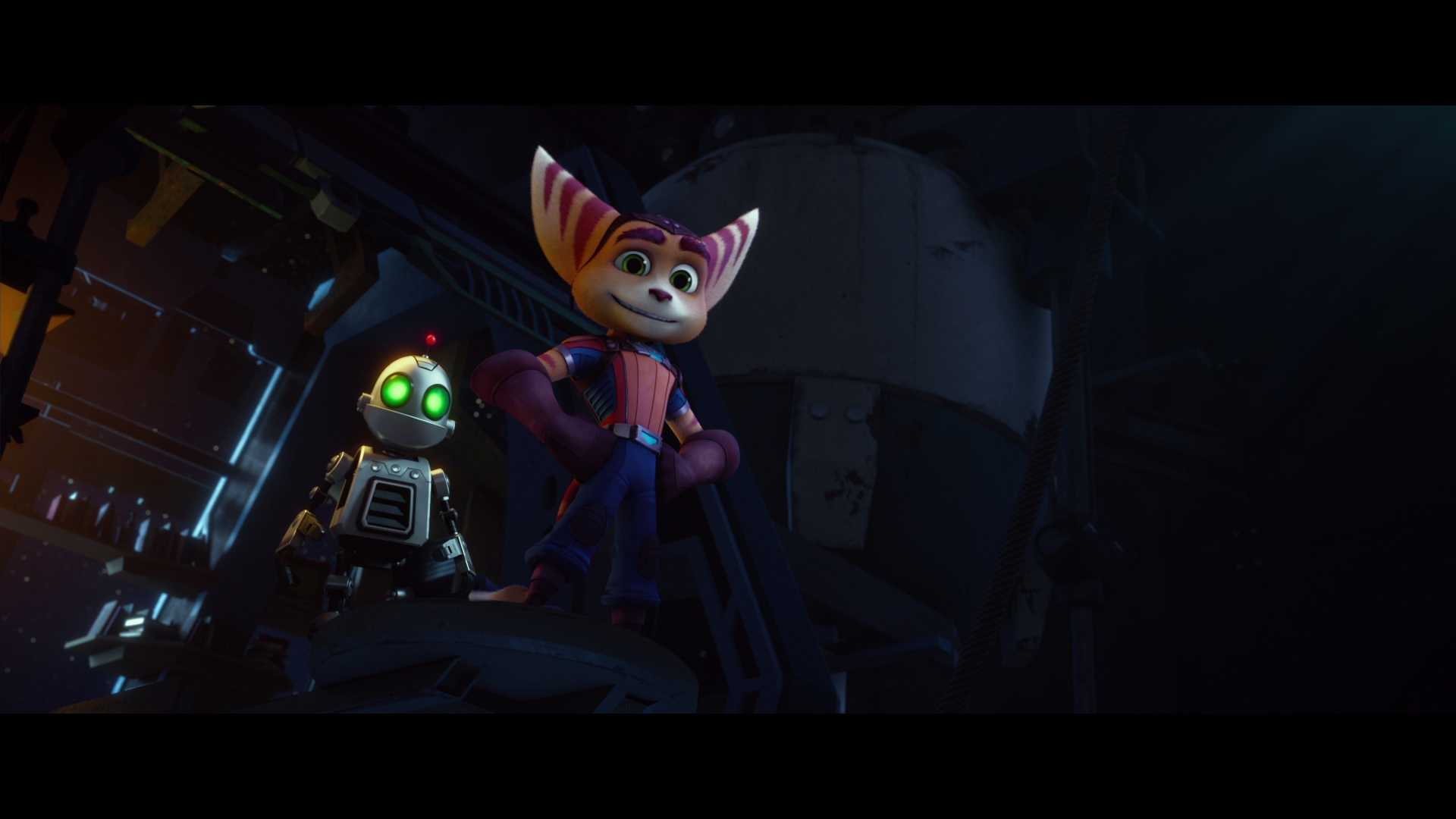 Done on the cheaper spectrum of modern animation, an understanding of those circumstances leads to an impressive visual scope. While frequently contained in small environments, animation sells these characters more than the writing. Details, from Ratchet’s fur to Clank’s slightly worn metal plating, create fidelity. On Blu-ray, costume threads and other such touches remain visible.

Vibrancy remains a hallmark of the series, brought up from the games and into this movie adaptation. Captain Qwark drapes himself in green spandex, always the center of attention. Splendidly subtle color variations exist in Ratchet’s fur. Pleasing concentrations of color bring life to the various planets.

Only in the third act will Ratchet & Clank fall back on shadows. Most scenarios occur when brightly lit and with superlative contrast. Just to note: even those darker corridors have life. Black levels dominate, keeping space flush with dense imagery.

Excelling when it comes to space battles, this 5.1 DTS-HD track doesn’t feel limited by the format. While a 7.1 mix could offer ample opportunity for additional space, what’s here expands on the visual scope. Ratchet’s first action scene, trailed by hundreds of metal objects, creates extensive sweeping effects throughout the soundstage. Lasers and flying robots come later to the same effect.

Neglected as it is often is with animation, the subwoofer finds limited action. Entire planets explode yet the low-end registers lightly at best. Action struggles when it requires heavier accentuation. While better than some, the effort still makes for a cautious, reserved mix.

It’s a shame Ratchet & Clank struggle through their film adaptation since the videogames are flushed with energy and life.