The Girl of Steel soars on her own in this excellent first season thanks to a wonderfully cast Melissa Benoist from Glee. Say whatever you want about the merits of Supergirl’s first season; Almost everyone in DC Comics fandom agrees that Melissa Benoist brings a bright, effervescent spirit to her role as Supergirl. She brings an infectious enthusiasm and joy playing Superman’s cousin, one that some critics have even compared to Christopher Reeve’s beloved portrayal of Superman. It’s a much needed tone for the heroic DC Comic book character that flies in the face of increasingly grim DC movies.

Television producer extraordinaire Greg Berlanti comes over from the CW having started two successful shows based on other DC heroes, Arrow and The Flash. It was The Flash’s phenomenal success in its debut season that gave CBS the courage to green-light an expensive show like Supergirl in the first place. Infusing a lighter tone into the proceedings than even his previous DC-based shows, this is definitely a show aimed at a wider, more female audience. Supergirl is built as a show for both superhero fanatics and casual fans.

Supergirl as a character has been around since 1959 in various forms. Each episode’s opening introduction briefly recaps her origin story and acknowledges her relationship to Superman. Kara Zor-El, teen cousin to baby Kal-El, is sent in a separate spaceship off the dying Krypton. Getting knocked off course by Krypton’s explosion, she arrives much later than Kal-El. He has already grown up to become Superman. By the time her spaceship crashes on Earth, Superman has already begun his career as Earth’s greatest champion. Having been placed in suspended animation for her journey, Kara is only a young teenager when she first lands on Earth and is now much younger than her cousin. Superman places her with a set of foster parents that know Kara’s secret, the Danvers family.

Kara’s story skips ahead about a decade in this first season very quickly. She now lives in National City, a shining city that faintly recalls Superman’s home of Metropolis. Kara works as an assistant for Catco Worldwide Media under its mogul Cat Grant (Calista Flockhart). Running a huge news empire, Cat is akin to the Bill O’Reilly of this world. A shrewd and tough businesswoman, Cat will eventually become an important mentor for Kara and Supergirl’s biggest public supporter.

Every Berlanti production has to have a nerdy tech character and Winn Schott (Jeremy Jordan) fits the bill. Winn also happens to work with Kara at Catco. One of Kara’s closest friends, Winn often provides his computer skills to Supergirl when she’s on a mission. What connection does he have to one of Superman’s foes? Winn has feelings for Kara, while she only has eyes for James.

Another important cast member is Kara’s adoptive sister, Alex Danvers (Chyler Leigh). A secret agent of the Department of Extra-Normal Operations (DEO), Alex and Kara have a strong bond as sisters. The government agency is tasked with keeping the Earth safe from aliens. Which is needed when a Kryptonian prison crashes on Earth, unleashing dozens of dangerous alien villains for Supergirl to deal with in her adventures.

David Harewood plays Hank Henshaw, head of the DEO. His character is one of the season’s biggest surprises, as it is made clear he’s hiding something from everyone. He acts as a father figure to Kara as he directs Supergirl on many of her missions.

Supergirl’s first season provides plenty of memorable moments. In a heavily hyped crossover with the Flash, Barry Allen (Grant Gustin) crosses universes to visit National City. Nothing gets comic book geeks more excited than seeing their favorite heroes together. Melissa Benoist and Grant Gustin, former cast mates from Glee, play off each others’ superhero identities with remarkable ease and grace. It’s everything fans could have wanted in what is the season’s very best episode.

This first season doesn’t forget the super-villains. Livewire, Silver Banshee, and Indigo are but a few of the villains that show up to take Supergirl out. There is definitely an emphasis on including female villains, most rarely seen outside the pages of DC Comics. It’s a refreshing line-up of villains, one of this show’s biggest strengths in season one. The show’s costume designers churn out a number of impressive costumes for each villain.

A couple of casting choices are nods to longtime fans. Helen Slater (star of Supergirl: The Movie) and Dean Cain (Superman of Lois & Clark) make occasional appearances as Kara’s foster parents. It continues a long tradition of DC Comics-based productions paying homage to earlier versions. It’s the type of fan service that harms no one and adds a bit of nostalgia whenever they appear.

Supergirl is laced with humor and features good-natured tales of superhero adventure.

Some things will irk longtime comic book fans. The first season of Supergirl name-drops any number of familiar characters from DC Comics, including Red Tornado, Maxwell Lord, and the Martian Manhunter. However, the show’s writing staff does not cover itself in glory when it comes to important details that matter to hardcore fans. The writers for The Flash showed remarkable attention to detail in his first season and fundamental understanding of the character. It’s apparent the normal writing staff for Supergirl didn’t pay much attention to her long history in comic books, mostly riffing off prior versions of Superman’s movie and television productions. They do pay tribute to Alan Moore’s classic “For The Man That Has Everything” Superman story from the comics. The episode “For The Girl That Has Everything” places Kara in Superman’s role.

Superman himself is mostly treated as an afterthought, making blink-and-you’ll-miss-it cameo appearances. His role in Supergirl is little more than off-screen lip service to the iconic character. The way season one unfolds, you get the distinct impression James Olsen knows Superman far better than his own cousin. Directly showing Superman was apparently off-limits in season one, which does hamstring several potential story-lines. That issue is rumored to have been addressed for the upcoming season. It made for awkward treatment of the character in season one.

This Supergirl blazes her own trail as straight superhero storytelling intended for Millennials that grew up on Smallville. Supergirl is laced with humor and features good-natured tales of superhero adventure. It’s amazing how far special effects have come on the small screen. Smallville consciously avoided Clark flying to save money. That is no problem with Supergirl. Kara flies in her costume all over the place in convincing fashion.

While it falls short of perfection, this is lighter superhero fare led by a very impressive Melissa Benoist. Casting the main hero is always the most critical factor in these superhero shows. Supergirl’s producers absolutely nailed it. 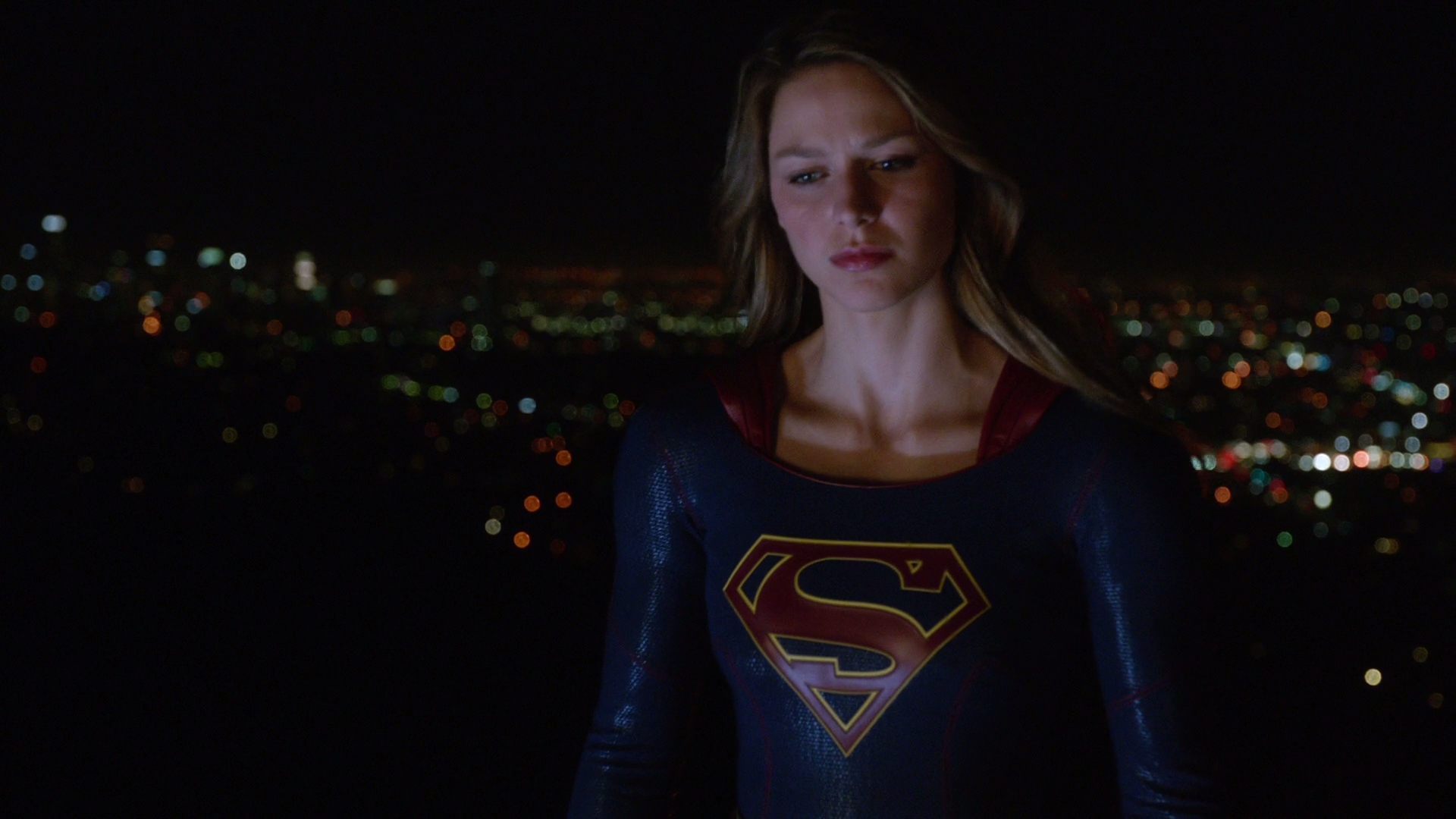 All twenty episodes of Supergirl’s first season are included on three BD-50s. It’s not the wisest choice by WB’s encoding team but smoothly handles Supergirl’s video anyway, despite video bitrates averaging in the low teens. The AVC video is presented at the show’s native 1.78:1 aspect ratio in a fairly dazzling presentation.

Supergirl is shot on the Arri Alexa digital camera, producing consistently sharp definition with perfect colors and contrast. CBS sunk a lot of money into Supergirl’s first season and the production values reflect a shiny, new network series that spared no expense. This is crisp video a tick under the best-looking television releases on Blu-ray. Even the CGI effects and stunts turn out fairly well, integrated nicely with the more mundane moments.

Befitting her cheerful demeanor and lighter tone, Supergirl’s world is bright and colorful. The cinematography avoids the darker palette of fellow superhero show Arrow. Resolution and clarity are both strong. Some minor filtering is noticeable when Calista Flockhart is in a scene. Softer lighting is used for the more casual moments. That leads to clean but less impressive HD than is possible with the Arri Alexa camera. Flesh-tones breathe with realistic tonality, which is rarer and rarer in a television universe dominated by teal and orange.

WB has done a fine job with Supergirl on Blu-ray. The transfer from Supergirl’s 2K digital intermediate results in nearly immaculate video that certainly improves on the broadcast’s presentation. After the relentlessly dreary color palette of Zack Snyder’s Superman films, it’s great to see Supergirl operating in a well-lit, pristine setting on television. Her costume leaps off the screen with its iconic color scheme.

The 5.1 DTS-HD MA audio is action-packed when necessary. The surround mix offers a pleasant combination of impact and delicate placement. Made for television, it’s less active than most theatrical mixes. Thankfully, the audio brings it when Supergirl has to save the day or fight the villain of the week. Offering nice dynamics and perfect fidelity, dialogue is completely intelligible and balanced. The jump in budget from Berlanti’s other DC shows on the CW is reflected in the improved sound design. This soundtrack sounds better than the ones heard for the Flash or Arrow on Blu-ray.

Given Supergirl’s pedigree with comic book fans, this set looks a little on the light side in terms of special features. The featurettes are entertaining, showcasing a number of cast members and producers in interviews. The lack of a commentary is surprising for a WB TV set. Everything here is nice but the fan in me would have liked to seen more.

The set arrives in a slipcase. WB has provided an episode guide inside as a small booklet. The included UV digital copy redeems for the entire season on UltraViolet providers in HDX.

Supergirl: 2015 Comic-Con Panel (14:50 in HD) – Cast members and executive producers discuss the first season of the show. They also answer fan questions. These kind of panels are usually highlights for the superhero shows and this is no exception, though most San Diego panels run longer.

The Man From Mars (09:36 in HD) – A featurette discussing J’onn J’onzz, better known as the Martian Manhunter. The character’s history and development are discussed by David Harewood, Melissa Benoist, Chyler Leigh, Dan Didio, and producers Andrew Kreisberg and Ali Adler.

Deleted Scenes (Episodes 6, 8, 9, 11, 13, 15-18) – Detached from their respective episodes and shown without context, these brief scenes were left on the cutting room floor.

Supergirl flies high in this impressive first season that sees her battling an array of comic book super-villains.