Looking back on Weird Al Yankovic’s UHF with Ratings Game back in home video circulation, the parallels are stunning. Actors share roles – Kevin McCarthy as a sleazy executive, Michael Richards remaining simple – and both connect by featuring low rent TV stations seeking to boost ratings. Separated by five years, these films both slay the (then) current state of network television. The similarities are uncanny.

Danny De Vito directs and stars in Ratings Game, certainly aiming for different humor than Yankovic. The latter’s methods are quirky and brash. De Vito’s is often cruel, and his own case, a touch self-referential in a post-Taxi world. Centered with a touch of odd romance, Ratings Game establishes some comedic energy, even if De Vito’s work sputters from age and pace.

Well encapsulating the (sometimes) dire condition of 1980s prime time network offerings, De Vito hones in on his prey. Parody commercials for upcoming shows on “MBC” lace themselves with sexism, hokey ideas, and grotesque comedy. The outlandish ratings grabs of each time slot – the more absurd the better – gives a high point to Ratings Game. More so considering this movie premiered on a young Showtime.

De Vito’s character, Vic De Salvo, is a deeply Italian manger of a truck driving company attempting to ween himself into entertainment. Executives wave him away without a chance, even if his material is no less low brow than what they air. Thus the game, where De Salvo weasels his way into filming a pilot, absurdly rigging the system to boost his show’s viewership. From there, Ratings Game skewers industry egos and berates a system which fits only those deemed worthy.

It’s clever, if executed without oomph. Ratings Game falls limp, bothered by a distinctly ‘80s slant. Stereotypes feel hopelessly overvalued for their comedic wit – and some aggressively date the movie. The gist of Ratings Game doesn’t come into play for an hour, leaving material waterlogged as it bounces between meetings and a perky relationship.

Really, it’s Rhea Perlman who steals this movie. Despite a work ethic, Perlman remains ignored by her boss (Kevin McCarthy) at the ratings company. This leads into a bit of espionage as she breaks from her passive attitude after losing a promotion to sexism. It’s gold, and more the heart of Ratings Game than De Vito. Shame it takes so long to get there. 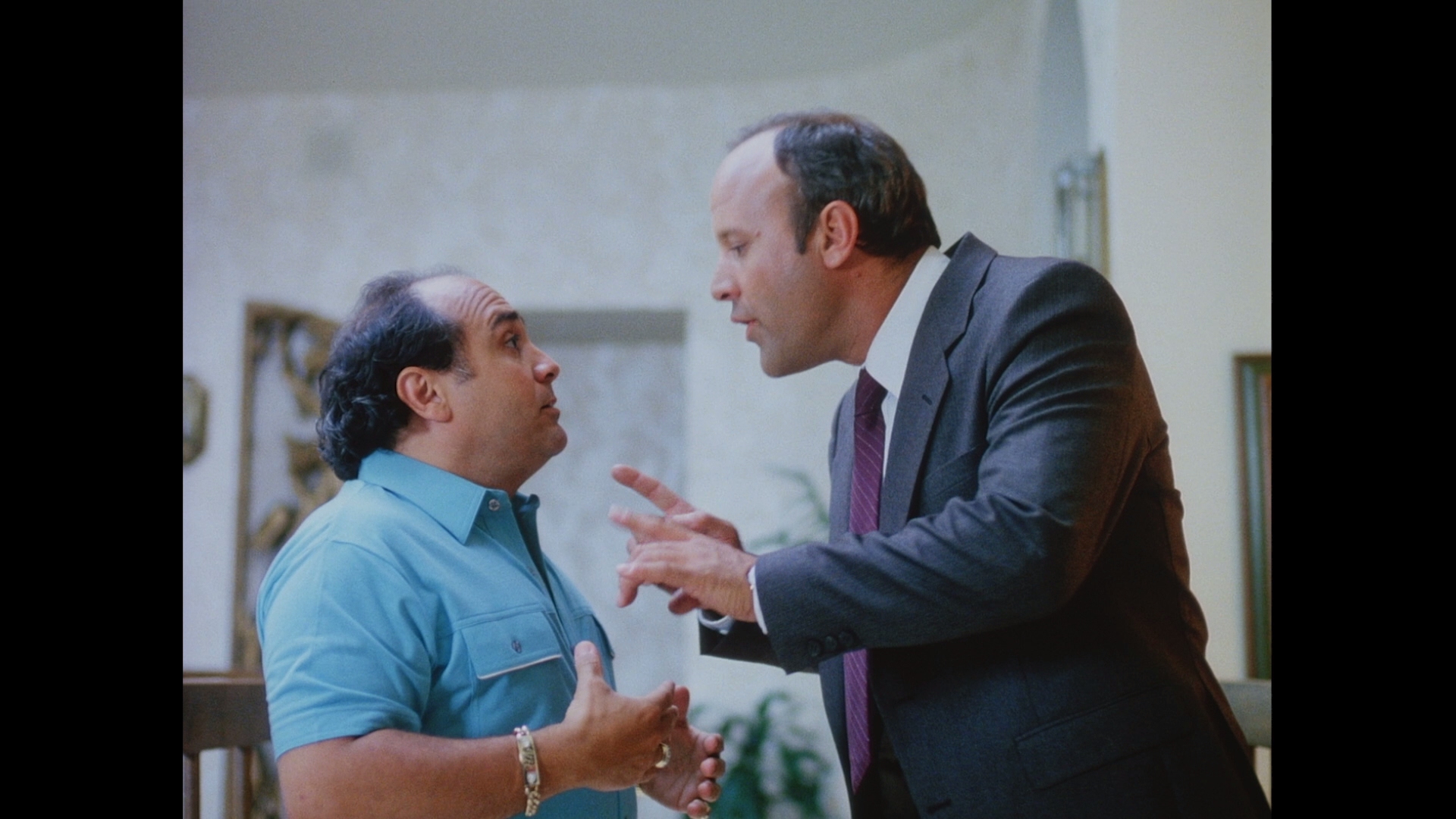 Rejected by the home video scene after a one-off release on VHS/Beta, Olive brings this obscure TV movie to Blu-ray in an adequate presentation. In its original 4:3 framing, apparently light restoration gives Ratings Game a boost. Notably, despite a touch-and-go contrast (with the ability to blow out highlights) colors stay fresh and vivid. Primaries carry dense saturation and color, enough to bring in some mild chroma noise.

Damage to the source doesn’t qualify as severe although it is persistent. Scratches and marks cover near every frame in varying degrees. Luckily, the print is stable. Years of disinterest in a re-release doesn’t leave fading or other age-related defects.

Hardly the height of fidelity, image quality takes the biggest hit from the softer cinematography. A haze slips in over the contrast, blotting out fine details and lessening image pop. In close, images struggle to produce the typical details, to no fault of the transfer. Dry black levels take away some of the heft too.

At least Ratings Game appears well mastered, with clean grain structure. Given the lack of home video attention, De Vito’s work certainly falls into a “better than nothing” category regardless of the AV specs. Note any commercials for upcoming show spoofs are all VHS quality.

Take what you get with this DTS-HD mono track. Flat and audibly in line with ‘80s TV, there’s little to gush or even talk about. Lacking in clarity and vibrancy, the track earns a passable mark for its (at least) clear dialog. A few music cues wane. Some pull direct from VHS.

Deleted scenes (a bit over six minutes worth) act as bonus number one, with Showtime’s original featurette and promo spot at number two and three. The winners are four of De Vito’s short films, including one about an atrociously, unedited politician running for Senate which has more relevance today than it did then.