Adding 30 minutes to a gratuitous, messy film doesn’t fix anything. The pseudo-observant Batman v Superman still limps through rounds of movie logic like a riper edition of Frankenstein vs Wolfman – marquee names, tepid results in both cases. With extra time in this home video cut, Batman v Superman still doesn’t give the pairing enough reason to fight. Although a threaded Africa-based subplot is a bit clearer, its impact remains negligible. But, they did insert little unexplained tidbits for DC followers to dissect in Warner’s effort to build a cinematic “world.” Not universe, world. There’s a difference, supposedly.

Chaotic and rarely under control, Batman v Superman’s frantic visual style uses endless forms. Film, digital, various cameras, lenses; it’s ceaseless in trying to look different in each scene. Except for color. Zack Snyder’s hum drum palette consists of mopey blues and oranges (a bit of teal on occasion) leaving his work derivative and without life. What a dull existence for superheroes.

Thankfully, shadows manage themselves well, astonishing in their power. A touch of crush not withstanding – and putting a man in a black bat suit in the dark calls for it – image depth is supremely pure. Each scene finds extreme density, pure and attractive in a way darker visuals often fail.

Worries regarding Warner’s compression go unfounded. Each edition – 2D, 3D, Ultimate Cut – receives its own disc. Extras reside only on the theatrical 2D disc, leaving room for the encode to breathe, and it needs to. Heavy grain, artificial and otherwise, pounds the screen in each shot. If grain is a bother, it’s in early desert scenes as wind picks up sand particles. That’s too much to process – fine grain, fine sand – leaving thick digital remnants behind.

Whether grain is there or not, fidelity gives Batman v Superman the definitive blockbuster and glossy look. Details on Doomsday adds appreciation to the textural details animators layered onto the creature. Superman’s suit reveals each stitch as does Batman’s. Facial definition, while sometimes softened by cinematography, shows extensive detail. Exteriors of Gotham and Metropolis are simply gorgeous.

Take much of that away for 3D, in particular the black levels. Batman v Superman 3D shifts shadows into blues, lessening the impact of the film’s visuals. Key moments begin to appear washed out and faded, losing intensity and somewhat ironically for a 3D presentation, the depth too.

Conversion efforts are not worth it anyway. Reserved and even flat, images stunt any 3D effects. While the big fight saturates with rain, there appears one layer of rain in the front, and another behind the superheros. Cinematography doesn’t set up dimensionality, and rarely offers opportunity for pop-out or foreground objects. Also of note, only the theatrical cut is available in 3D. Additional scenes didn’t receive a conversion. 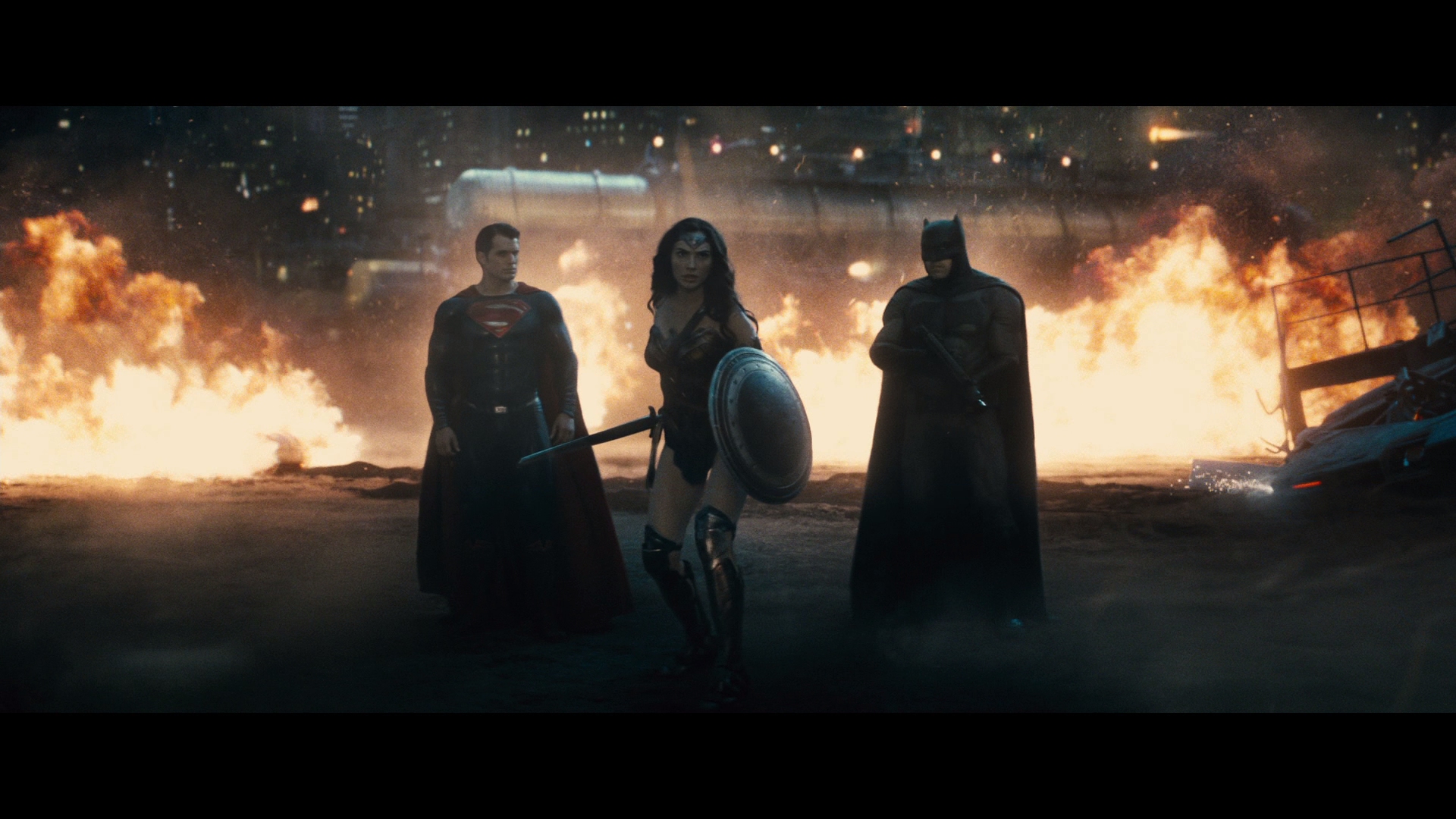 Huge, enormous LFE scales up the eventual battle, selling each punch and blow as if trying to match a torpedo explosion. A surge of gunfire during chase scenes has plentiful heft. Opening scenes recounting Superman’s brawl in Man of Steel acts a demo. From the alien ship lifting and dropping the city, to falling debris around the perspective of Bruce Wayne, plus the enormity of buildings falling, it’s a showcase sequence.

A tremendous level of audible enthusiasm presents in this track. An awesome spread of activity carries through each scene, from whipping desert winds to high-end parties with their clanking glasses and polite chatter. No scene spares the additional surrounds of this 7.1 (also Atmos) mix.

There are few discs with this level of narcissistic pandering for a studio’s product. Most bonuses read like hype reels meant to instill excitement for DC’s slate of upcoming super hero flicks, while further escalating the heroes featured in Batman v Superman. For any type of behind-the-scenes info, you’ll need Accelerating Design, a greatly produced 22-minute feature on crafting the Batmobile. Elsewhere, Legacy of the Lair focuses on the creation of the Bat Cave, but without the length to dig deeper (7:12).

From there, it’s into building the DC cinematic “world” as they call it. Uniting World’s First sets up the future installments and discusses DC’s place. Complexity and Truth, The Warrior, The Myth, The Wonder, Empire of Luthor, and Austerity & Rage explore Superman, Wonder Woman, Lex Luthor, and Batman respectively. Gods and Men then looks into other characters set to be added soon. The final character-focused bonus is Grace and Power, selling Gal Gadot as Wonder Woman.

Might and Power earns the award for the best thing here, if only for the sheer absurdity of trying to explain the big fight with real world physics calculations. With finality, Save the Bats delivers a PSA about bat conservation, aimed primarily at kids.