Kung Fu Panda 3’s important lesson buries itself under 80 or so minutes of frantic action. Po (Jack Black) learns the value of failure and how it makes us stronger, an allusion to “everyone gets a trophy” culture. Sadly, Kung Fu Panda 3 lacks follow through. Credit is due for the attempt, however.

While still charming and light fantasy, Kung Fu Panda has turned formulaic. Sucked into routine “villain of the week” sequel-itis, the room to explore any cultural lore has subsided with each entry. The hook here is the addition of Po’s real father, a dynamic which reels in the lesson of being who you are. There’s power here, albeit squished between the mystical antics.

Animation improves with time, and so does the series’ visual oomph.

Kung Fu Panda 3’s time passes within a hidden village of pandas, teaching Po the ways of their existence – they roll, eat dumplings en masse, and live on obese side. A change in setting breaks the film away from the dusty, rundown noodle shop and glossy temple interiors of before. Animation improves with time, and so does the series’ visual oomph. Some stylized flashbacks are better still.

Let down are those seeking screen time for side characters. Given the required space to squeeze a dozen or so pandas into the story, the usual interactions for Po and the Furious Five dwindle. Lucy Liu and Jackie Chan have six or so lines combined as Viper and Monkey, respectively. Their roles must be contractual at this stage; sound-alikes could fill their parts. Story focus doesn’t narrow. Rather, this trilogy-maker tags in new players. The possibility for action figures hasn’t eluded the narrative – there are dozens of pandas to mold into plastic now.

Should it continue, Dreamworks’ wild and admittedly still entertaining franchise requires a stroke of chance. Po’s vibrant, excitable personality can carry a film, even if the central conflict isn’t with an oversized, super powered villain. Kung Fu Panda 3 has left enough room to move forward – family concerns, Po’s growth into leader – without the indifferent Kai (J.K. Simmons) menacing the mortal realm. There’s still plenty of energy, the humor stays in line, and the colorful action remains. Kids will latch on, even if the appeal is waning. 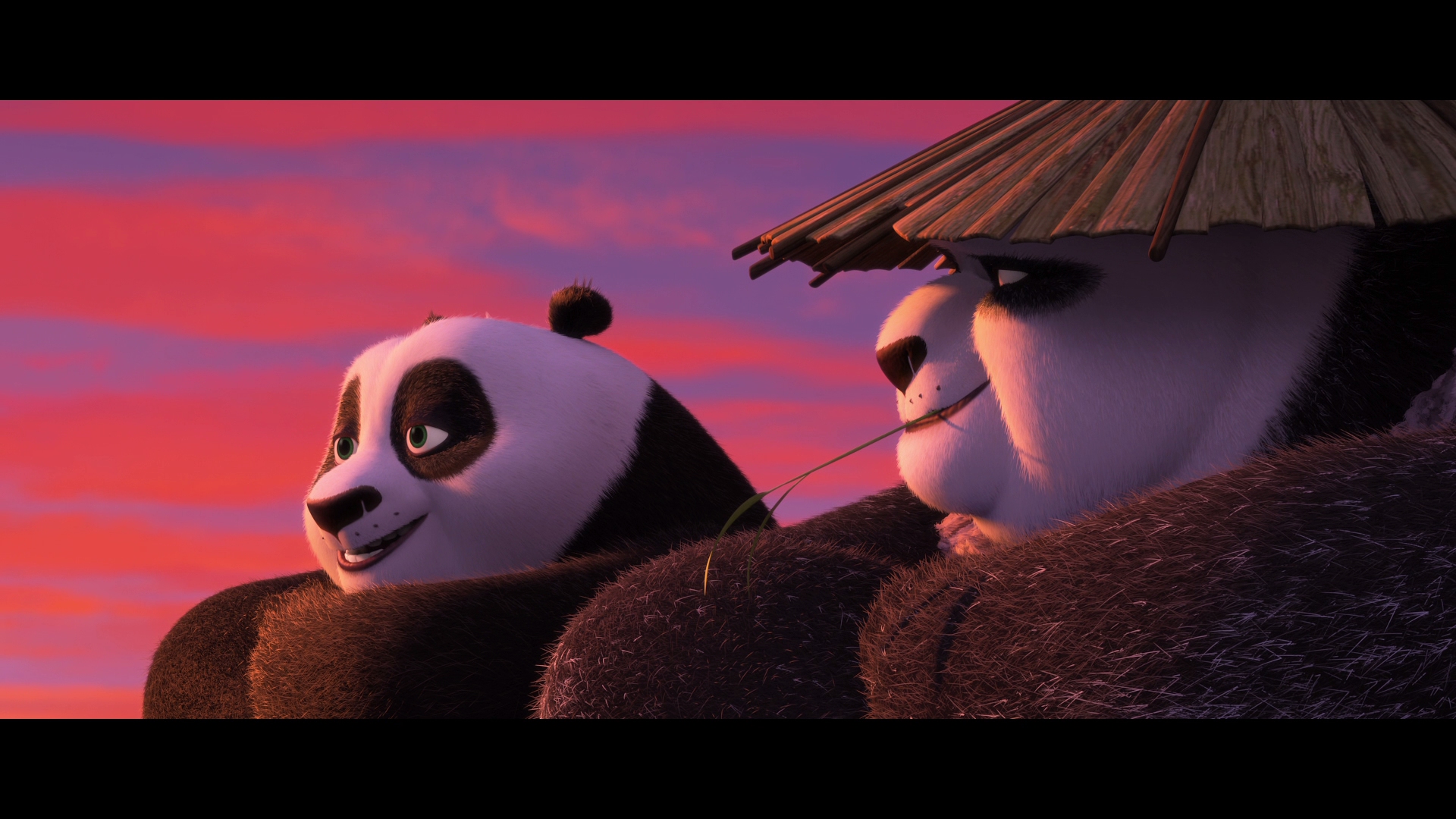 While Blu-ray’s core specifications haven’t changed in a decade, the evolution of animation during the format’s life insinuates otherwise. Animation continues to be the primary driver. It’s not only elements notable for their resolution. Kung Fu Panda 3’s ample color palettes feel richer and more disciplined than prior. Better encoding has conquered minor instances of aliasing.

Some of the marvelous images here include painterly shots of the temple, lengthy views of untouched Chinese landscapes, and dazzling action, free of compression. Even a late instance of confetti won’t bother Kung Fu Panda 3. Sit back and enjoy the color. It’s all perfect.

Bass acts as a let down, rumbling a touch as pandas roll downhill. Extensions happen during certain kung fu strikes, but as with most animation, LFE usage stays reserved. The subwoofer isn’t fed material regularly, and what is here lacks force.

Skip everything and jump to the five minute Play Like a Panda which fills with real baby pandas doing real baby panda things. The lone extra of any real value, it offers real baby panda footage and nothing else is necessary. A handful of animated shorts run under three minutes each (without any real baby pandas) and you can have some musical fun in a short karaoke performance. Learn papercraft in minimalist tutorial or discover the origin of “Skadoosh” in another brief featurette.

The co-directors introduce a number of deleted scenes, most of them near completion, which is rare. Note none of them contain footage of real baby pandas.