If it’s not 1957’s Zero Hour then it’s Airport 1975 which fed the sarcastic spoof Airplane. Airport 1975 unknowingly writes itself into a schlocky corner with hysterically heavy-handed drama and no self awareness. A small tug of moderate tension cannot overcome the thick melodrama.

Inheriting a slew of the disaster genre’s bad habits, Airport 1975 infects itself with soap opera-esque exposition and hammy character tropes. The sour romantics, the arrogant businessman; all of it bleeds Airport 1975 (and a slew of follow-ups in the disaster cycle) dry. And poor Linda Blair, stuck under a blanket as a small child awaiting a kidney transplant, serenaded by a nun in the film’s desperate bid for empathy. Airplane would have a field day with that one.

Comical in its own attempt at mass entertainment spectacle, there’s joy in the crude thrills…

It’s unconscionable no one in the creative process grasped their nonsense, or maybe they enjoyed it. When control tower employees call a military base for help, their response is, “That’s one hell of a stupid idea.” The call taker is unaware he’s referencing a large swatch of the ideas in this series. Airport as a whole serves an almost illusory look at air travel as it once was. Flying fears included a brush with nuclear arms or – ludicrously – drowning in the Bermuda Triangle. The descent into kookiness via the sequels was immediate, even with a cavalcade of named stars.

Setting off the drama here is a mid-air collision with a private prop plane. The co-pilot of the 747, suddenly turned into a dummy on strings, is sucked out the cockpit hole. Other pilots die on impact or suffer injuries. Helpless stewardess Karen Black is unable to steer things as the next in command, pushing the film’s wide sexism (even for the ’70s) into view. Erik Estrada’s embarrassing Julio spouts egregious pick-up lines while other men in control groan at Black’s own inability to follow instructions. Cue a preposterous plan to put a man on board, and Airport 1975 simply shrivels.

Inauthentic and phony, Airport 1975 still has some bite. Comical in its own attempt at mass entertainment spectacle, there’s joy in the crude thrills of which a major studio found palpable on paper. Pushy – even bewildering – in execution, the disconnected follow-up to the grand Airport works only as far as its plausibility. That’s not far at all. 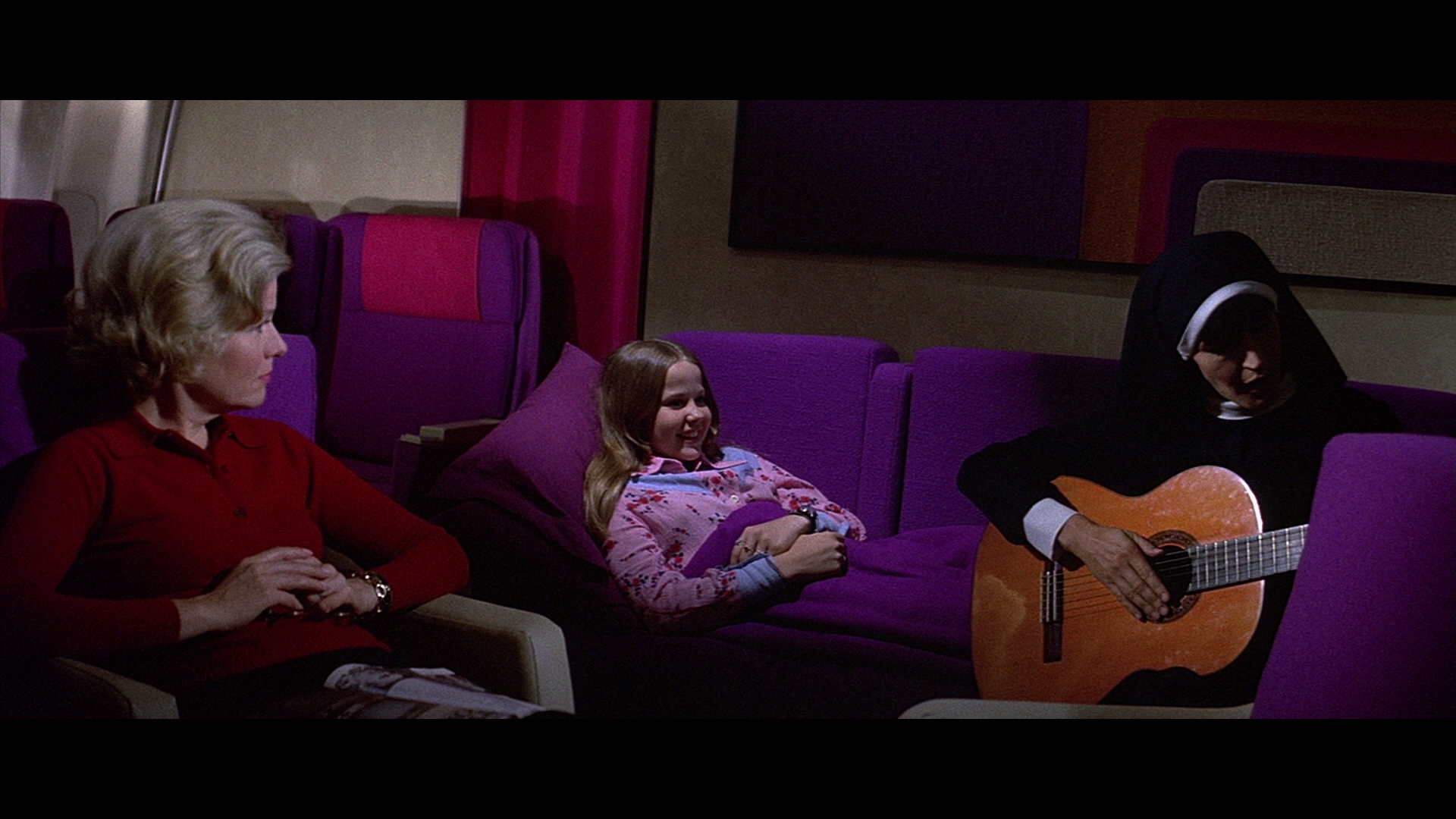 Universal gives a passable treatment to this Blu-ray debut, available only in a four-pack with the other films. While given its own disc, transfer work negates any benefit. Noisy grain appears coarse, lacking in clarity. The cause? Some definite sharpening which results in minor halos in certain scenes.

While missing a pure, film-like presentation, fidelity still resides on the disc. Aside from some dirt on the lens, all of the aerial photography produces fine images. Close-ups resolve facial definition with consistency. All of those mid-range shots host the bulk of the issues.

In this one case, maybe black crush is a relief. It can hide the noisier spots of the 2.35:1 frame. Darker scenes blend characters into the background. At one point, the two nuns appear fused with their chairs. Shadow details stay lost for a majority, lending Airport 1975 a harsher-than-normal appearance.

At least dialog maintains. Although audibly faded, each line balances well. Some clear ADR leaves some of Charleston Heston’s lines slightly out of sync early. Shrill screams from the passengers are the main challenge and hold together in spite of the generational loss.

A theatrical trailer has the bonus menu to itself.

Awkward and laughable, Airport 1975’s melodrama knows no limits and by luck, still happens to be entertaining because of its faults.