They grow ’em big in Amity

While inseparable from its predecessor, Jaws 2 captures the necessities of the shark movie on its own terms. Production troubles – fired directors and actor turmoil – don’t lessen the atmosphere. Jaws 2 feels the same. Arid, patient, and when needed, in total panic. It’s a sequel without a creative outlet, awash in the mystique of Spielberg and trapped in the typical skin of a killer fish flick. In those circumstances, Jaws 2 does well.

By 1978, Universal was already fending off Jaws imitators. Orca and Tentacles popped up one year earlier, crowding the newly minted “menacing marine life” genre. And yet, Jaws 2 is a showman, backed by capable expertise and enjoyable thrills. The fish maintains its credible fear, looming just out of view while the body count jumps into double digits.

When sloppy, Jaws 2 is a wreck. Lost in a swell of disposable characters (mostly teens) is story leverage, reducing the movie to an obvious box office grab as opposed to a character-led continuation. Joseph Mascolo’s Len Petersen interjects a bit of Jaws’ business naivety, setting up a new Amity development. The needless story bit lags, a narrative ploy to feel familiar, if sending the series into circles chasing its success. Jaws 3 didn’t help any.

… hollow as it is, there’s success.

For a sequel, ticket buyers come for the shark anyway. Jaws 2’s narrative padding panders to a sense of low mystery as Chief Brody (Roy Scheider) considers the implausibility of a second assault in his waters. Scripting eagerly seeks out kills with rapidity, doling out death and to Jaws 2’s credit, still fending off the urge to reveal the man eater. It exists unseen, effective and haunting, even if credibility crumbles by the mere existence of this sequel.

Jaws 2 refuses anything of depth, but hollow as it is, there’s success. 1978’s Halloween may have initiated the core slasher genre, but credit to Jaws 2 for setting the genre’s sequel formula into motion. More kills, more gore, more eating/stabbing, and make sure to involve teens. 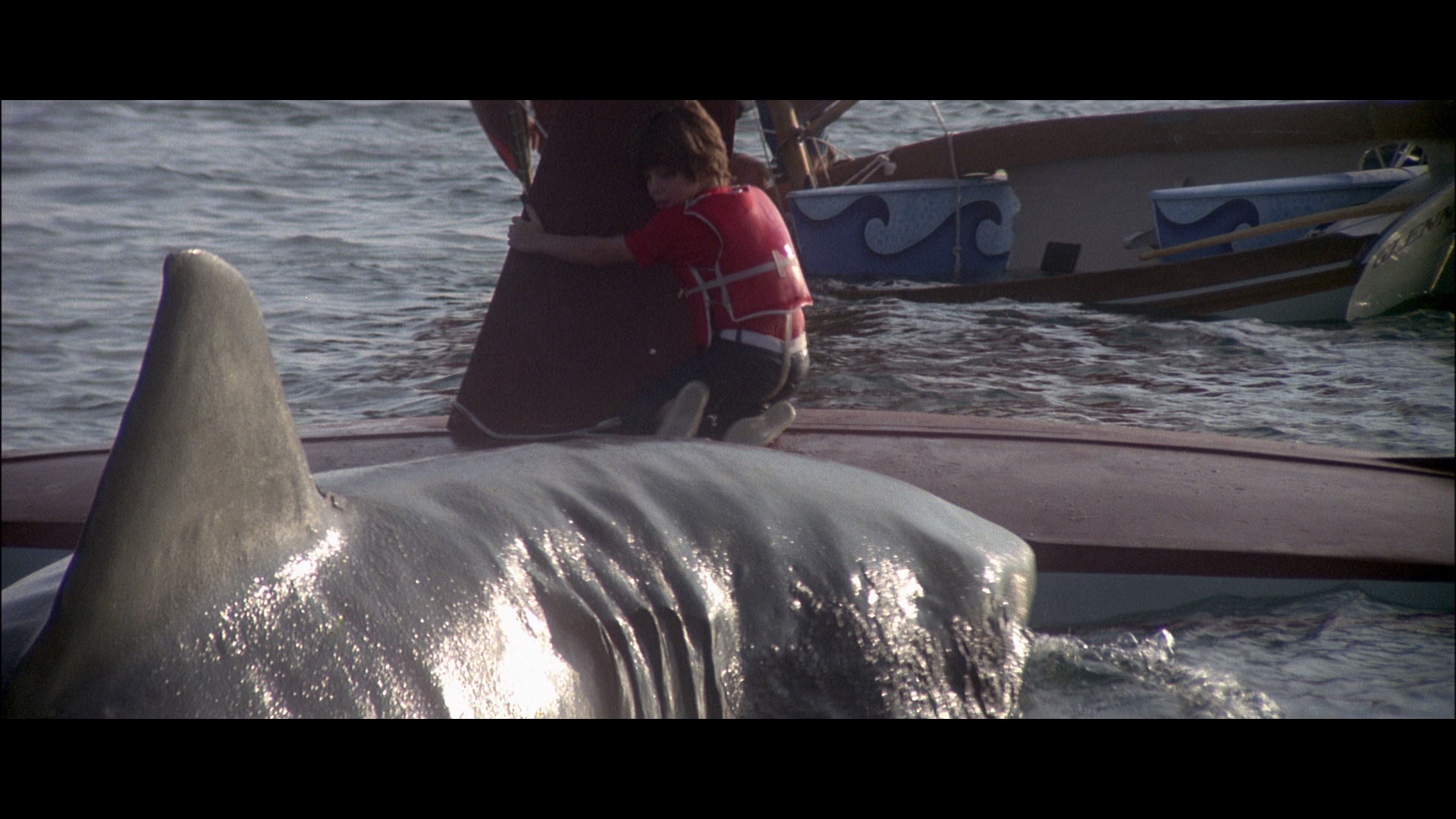 Those issues aside, Jaws 2 isn’t neglected. Images hold their clarity. Fidelity stays consistent, with allowances for softer cinematography as needed. The Martha’s Vineyard shoot captures the locale and this Blu-ray snatches up the beauty of the seaside community.

Of concern is the lack of zest in the image, despite excellent black levels. Contrast stays mediocre and colors need richer, natural saturation. Flesh tones veer into an off pigment while reds stay overblown – more signs of dated mastering. Luckily, grain stays put and the encode does well to keep the nature of the film stock intact. Compression only buzzes when against bright sunlight.

Plenty of specks and marks dot the print. A clean-up pass would not have hurt Jaws 2. Near the 1:07:30 mark, a small white spot stays on the frame for 15 seconds or so, an obnoxious little thing which draws the eye against the darker underwater photography. Otherwise, damage is typical for a print (and film) of this age.

If video needs clean-up, audio needs total restoration. Lousy clarity leaves action muddy and compressed, despite the uptick from DVD to DTS-HD stereo. Water splashing and screaming bunches together into muddiness while Williams’ score is lost in the audio melee. While not expected to produce great dynamic range, the sonic quality feels pushed from dated speakers with rotting interiors.

When not dealing with action, Universal’s disc does okay. There’s cleanliness to the dialog and when the score stretches itself alone, it’s fantastic.

Everything on the Blu-ray is a DVD carry-over, if complete. This includes a wonderful making of (45:22) and four deleted scenes. Actor Keith Gordon recounts his role in an eight minute interview, while the John Williams score has a spotlight in another seven minute featurette. Director Jeannot Szwarc tells a funny story about the movie’s French title in a brief one minute clip, with some storyboards following.

Production troubles fail to damage the competent Jaws follow-up. Jaws 2 may exist in a shadow and make mistakes, but it works when creating thrills.