While Jeepers Creepers opened with playful banter between its characters, Jeepers Creepers 2 begins with instant anger. A father yells at his son, a basketball team’s machismo turns them against one another. No one carries the film with their likability because no one is likeable.

Key elements subsist into this follow-up. A lonely country road, the sense of isolation, and the hungry monster itself. Gone is the tone, persistent pace, and character. Dialog sinks fast into cliche. There’s immediate retreat from this movie’s origins as a patient, clear-sighted creature feature. Jeepers Creepers 2 just descends toward a me-too creature feature in a slasher movie frame.

Jeepers Creepers 2 is thin but certainly designed for broader commercial appeal. A broken down bus filled with nondescript teens feeds the body count in predictable order. Lost is the sense of atmosphere and pacing – as a sequel, it’s inevitable to rush forward and skip the slow burn reveal. Unfortunately, much of the identity peels away as a result.

Production values substitute for mystique and lore. The monster exists to eat things, and the script bunches up its mythos in hokey, random dream sequences because the script couldn’t find another solution. There are also attempts to reach the tenants of slasher cinema’s sequels. With a cheesy wink and flirtatious smile, the Creeper courts the wacky Nightmare on Elm Street sequels. Gone is his near faceless mean streak.

As the genre tends to go, teens are disposable additions. Jeepers Creepers 2’s attempts to add substance, digging for social issues (race, homophobia) and connections to fate. Those concerns only glance their potential, building to minor character arcs during the finale. In the running and screaming, set between the spectacle, the context evaporates. Flipping trucks and explosions close out the action, a bit of low budget (if technically sharp) one-upping on the original. A bit of showmanship doesn’t hurt and in the mostly pre-CG era, the practically remains attractive. It’s a shame the build-up stays derivative. 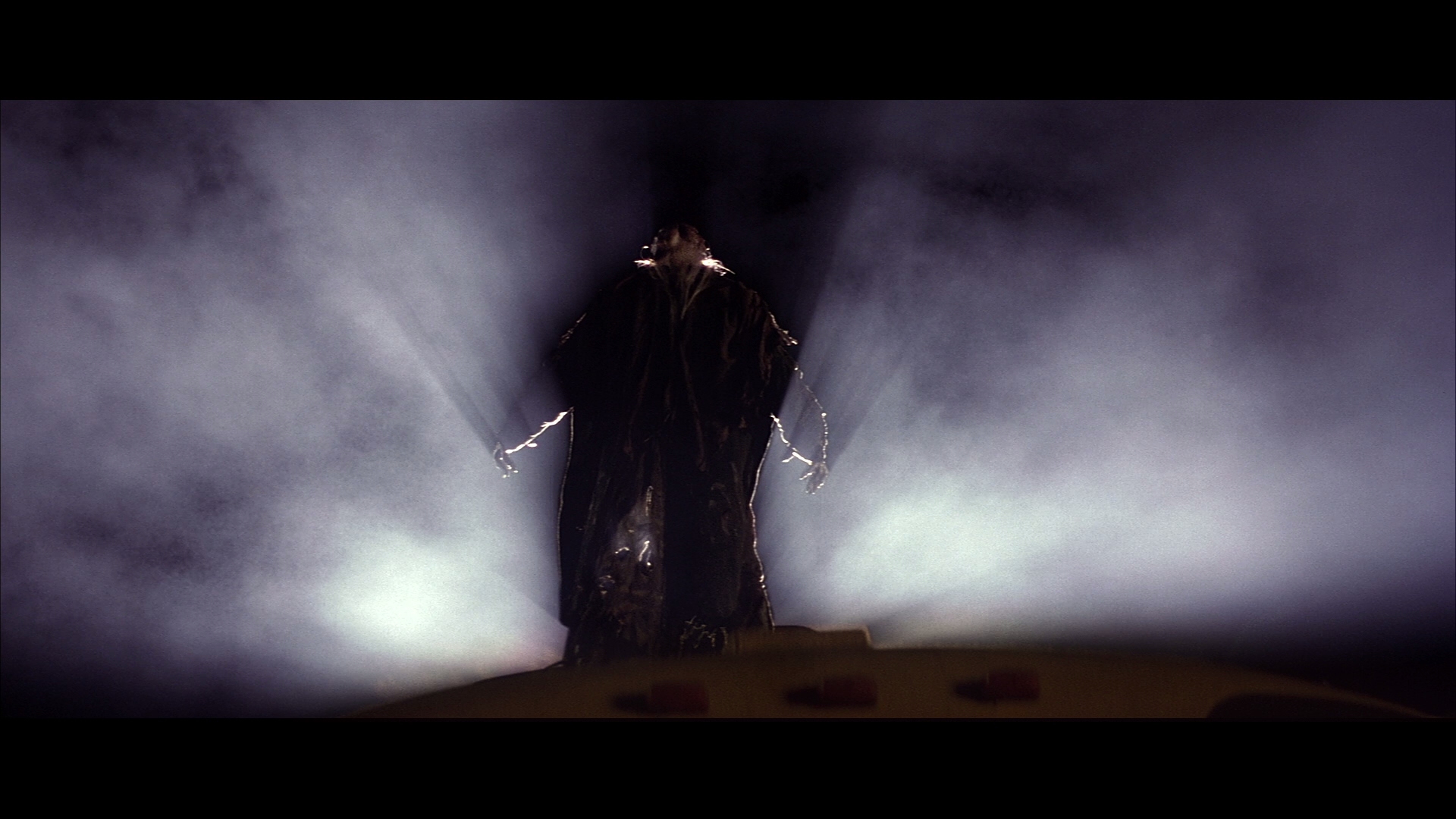 Opening scenes exist in orange, an aggressive blast of color which comes and goes as the film moves forward. Flesh tones, however, keep their warmer hue. Everyone carries a similar deep tan. The impact of 2000’s O Brother, Where Art Thou’s new digital color grading techniques leave their imprint only a few years later.

Of some concern is the sharpness. Initial scenes show minor halos. While minimal, a processed look converges over a majority of Jeepers Creepers 2, apparent primarily in the longer shots. Luckily, this one remains contained inside the bus and at night, making the issue less of a bother.

Black levels help, casting strong shadows and by chance, hiding some of the lesser effects against the night sky. Shadow detail holds firm with enough light seeping through the windows to keep images beautifully contrasted.

Locking the cast down into a bus creates opportunity for atmosphere, whether it’s lingering crickets chirping in the background or the creeper moving about on the roof. Positional channels capture motion including thrown objects or flapping wings. Stereos handle some dialog.

Disc two hosts a number of newly minted features. Then and Now offers great perspective on how the sequel was approached and jump started over 22 minutes of interviews. Ray Wise sits down to discuss his role in the 15-minute A Father’s Revenge. Three other actors have their time in Don’t Get Off the Bus (21:00). Those completionists will appreciate the legacy featurettes, four in total including an excellent on set diary of sorts. Fifteen minutes of deleted scenes, a gallery, and trailers remain.

The cliche of the lesser horror sequel follows Jeepers Creepers 2, less patient and lacking in tone compared the unique original.