Sam Rockwell doesn’t make his case for action stardom in Mr. Right. Although his character is meant to be a sharpened hitman, his fight scenes and gunplay are led awry by obvious editing and mundane choreography. Mr. Right doesn’t need spectacle though – it needs the foreplay.

Rockwell’s charmed mannerisms and indifference toward his abilities create a likeable killer. Derivative, yes, but paired with love interest Anna Kendrick, Mr. Right slices through the genre with a bit of sass. Playfully sending up action romantic comedies and hitmen thrillers, Max Landis’ script lands with plenty of comedic energy, or at least until the final act caves in.

In its first half, Mr. Right leans on one joke, but it’s a fine joke. Unlike other killers-in-a-romance flick, Rockwell’s open about his profession. He murders people while on a date and returns to the dinner table freely admitting the incidence. Kendrick’s naivety and slight instability reject the possibility with an uneasy smile. The second act doesn’t succumb to predictable shock or surprise over the profession because of Rockwell’s lies; it’s all in the open for the audience and characters from the outset. Side-stepping the mid-film break-up routine brings this breezy comedy its credibility.

The pair are equally off-kilter, enough to be entertaining without being overrun by outlandish logic. Despite their peculiarities, characters are quickly established, building to a suitable crescendo by the finale. Bit part performances by Tim Roth and RZA are wonderful support, a touch of grounding for the insanity to follow. Effective dark comedy sets up with cozy pop songs and Kendrick’s likeability, creating a cushion for the shootings, stabbings, and blood stains to follow. Mr. Right’s balancing act nails the tonality needed to keep the feature moving briskly (coming up short of 90 minutes).

Without tension – by design – Mr. Right seems confounded by closure, attempting to bridge Rockwell’s murdering spree and Kendrick’s fluttering sense of romance. Instead of an organic solution, Mr. Right leans on the damsel in distress, irritating in simplicity and leveling Kendrick’s character arc. Despite her spunk, she’s duct taped to a chair, helplessly awaiting rescue. Even a side character questions the plan – “Why are we kidnapping the girl?” Because it’s convenient and easy, that’s why.

Aside from the erroneous lead up to the finish, Mr. Right does find a resolution, ensuring closure and leaving this pair as they’re meant to be. There’s a spark to Mr. Right, cheesy meet cute romance and other ailing cliches aside. 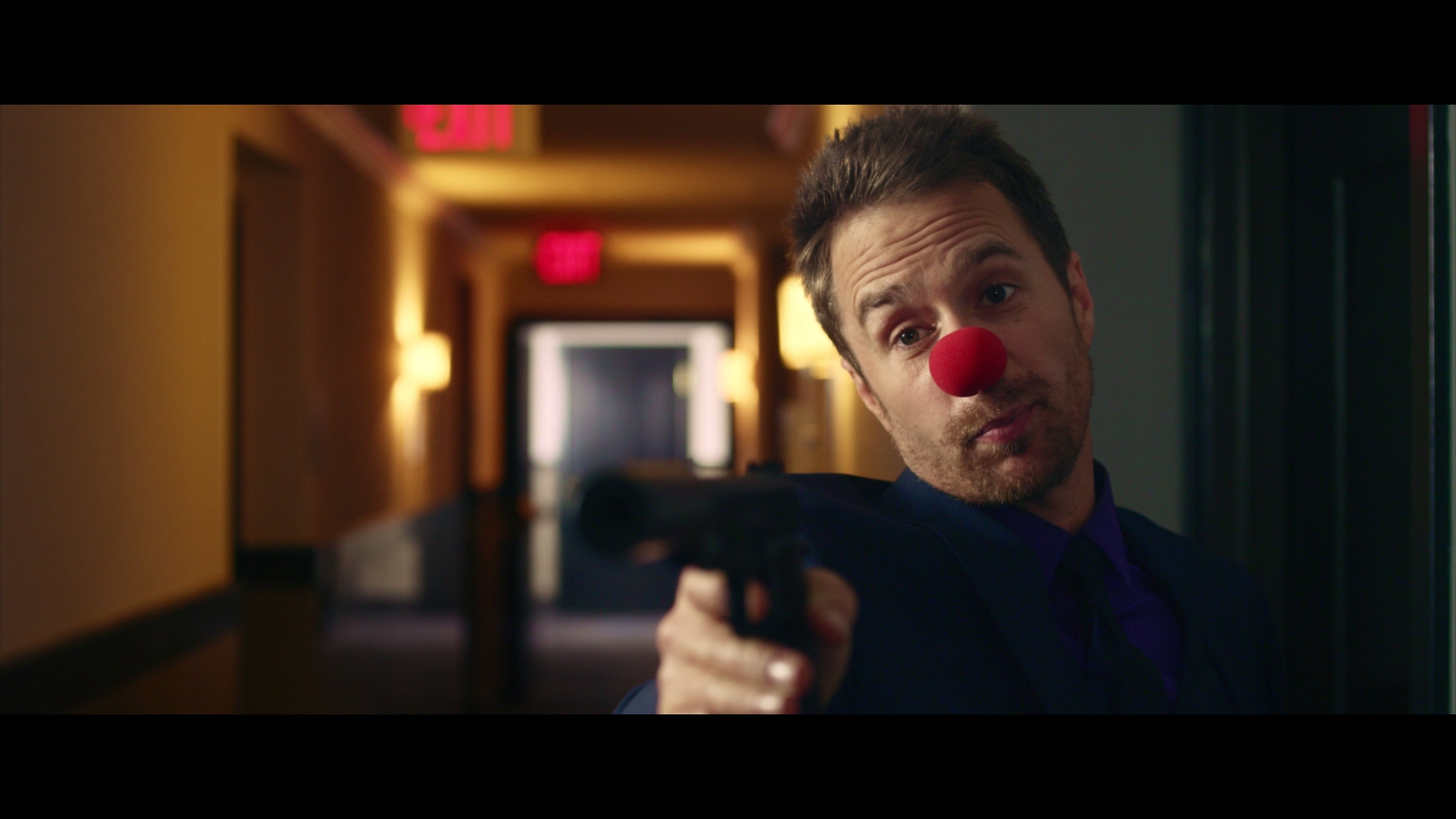 This digital production offers a few things of note. First is the super heated contrast, pouring light onto the frame and streaming in through windows. Backgrounds are usually a series of white blotches which represent the light source. Some detail can be lost, although Mr. Right still pours out excellent facial detail.

Close-ups capture high frequency material regularly. Budget restrictions keep the film contained, so the benefit is all to the viewer. Universal’s treatment, save for a single moment of noise, presents the material free of distraction. A sequence with some falling confetti isn’t even a challenge.

Missing, oddly, are black levels. Mr. Right loses some of its depth at night, strange considering the focus is clearly on producing a film flushed with appealing contrast. Shadows sink into blues or even an off purple on occasion.

Elsewhere, color pumps into the film to boost saturation. Primaries are bright and rich despite a push toward the warmer side. Flesh tones remain neutral. The appeal is wide.

If the budget shows anywhere, it’s audio. Dialog will stretch into the stereos (awkwardly early on as Kendrick hides in a closest; a transition during an edit pans incorrectly). Gunfire makes the rounds too. Rear speakers sound largely forgotten, as if this were a stereo mix pushed into 5.1 for Blu-ray. Until a thunderstorm rolls in to enhance the finale with some rain and ambient thunder, surround use remains deadened.

So it goes for the low-end, adding no oomph to the weak gunplay. Exaggerated kicks and punches work the LFE a tad, if in a menial way. Rockwell’s skills are displayed in slow motion, introducing a drop into the sub, if offering little to go on.

Don’t even bother with A Sweet Couple, a one minute plot recap disguised as the one bonus feature.

Sam Rockwell and Anna Kendrick are gold together in this slightly dark send-up of romantic action comedies – at least until the end.