Precariously stuck between rehashing the old and introducing the new, Zoolander 2 teeters its fan service and fresh ideas. What comes through is messy and distracted, gags unable to find grounding as they weave outside of direct satire. Broad social commentary shouldn’t be bursting from something like Zoolander 2.

Fifteen years since the original, the spark has left. It’s odd – the satire of vanity has become a vanity project. Given the passage of time – simultaneously too new and too old – Stiller’s work is awkwardly caught between near-sighted nostalgia and a push to be wildly different in a changing comedic climate.

The skewering of high fashion lacks relentlessness. Ben Stiller retreads idiocy as Derek Zoolander, rejoining Hansel (Owen Wilson) for another conspiracy unraveling. Kristen Wiig buries herself in make-up, absurd costumes, and indecipherable accents, pure villainess gold buried by the screen-chewing weight of returning co-stars. The egos remain and real world fashion personalities appear in cameos – as if in acknowledgment of Zoolander’s success – but Zoolander 2 is here for its own sake. Ribbing the industry no longer serves as the goal.

… the sequel lacks the critical impetus to exist…

Instead, Zoolander 2 mocks homophobia, body shaming, and transgender debates. Success is mixed. The script goes with Benedict Cumberbatch as All – a gender ambiguous model who married himself – before dropping the act with no later consequence. More conservative talking points are hit by Adam, Eve, and Steve, a bit of anti-gay slaying which is clever, if disposable. Zoolander 2 feels pressured or scared to run with the joke, dodging potential consequences. Such staid commentary lacks power.

For 90-minutes, the feature is more concerned with showing its ability to cast celebs. Zoolander 2 struts between A and D-grade appearances – treating the bit-parts as if on a live modeling ramp. Susan Boyle flips a middle finger and Justin Bieber takes 30 bullets to the chest. In doing so, Zoolander 2 glances paparazzi and internet culture too. In the third act, one-off appearances still flowing onto the screen, the film limps its way to closure.

Were Derek to direct a film himself, it would likely be an incoherent variation on Zoolander 2. Stuffed with beautiful, narcissistic characters and a variety show’s worth of stars, the sequel lacks the critical impetus to exist, short of bucking on the original’s built-in fanbase. Zoolander’s caricature and mockery remains splendid, even definitive. After 15 years, the hilarious social urgency which Zoolander carried has been halted. 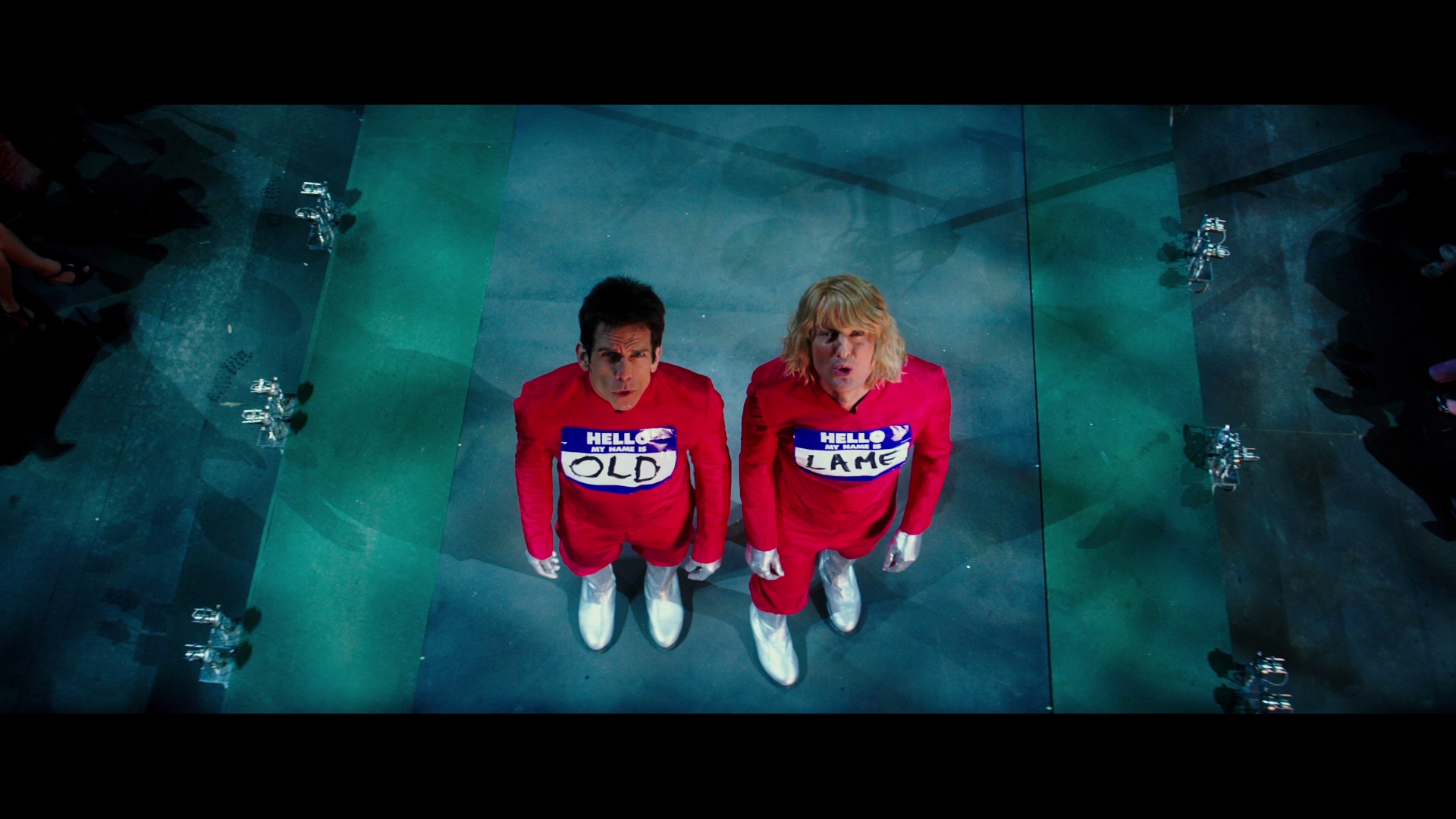 Choosing digital over film, the glossy look of Zoolander 2 is achieved through fantastic contrast and color saturation. Black crush does occur, if not to extreme levels once free of the opening chapter. For digital though, density of the shadows is unusually powerful. Contrast stays natural without being blown out.

Primaries are let loose across the frame, catching plenty of hues and creating an attractive HD presentation. Flesh tones warm slightly, if not enough to be a bother. Costumes are consistently pressing different color patterns, each equal in vibrancy.

The high level resolution produces firm detail, capturing the nuance of Derek’s Blue Steel and Hansel’s glaring scar. Despite the format change, the visual space mirrors the superb (and recent) Blu-ray master of the first Zoolander from Paramount. Exteriors of Italy serve as a brief, gorgeous travelogue.

When the final scene fills the screen with confetti, Paramount’s Blu-ray quits. It’s unlikely any bitrate would have survived the million (just a guess) pieces of shiny paper falling from the sky. Compression visibly pops up during this shot, the lone anomaly to a clean video slate. Digital noise would never dare intrude on such a ridiculously good looking disc.

While dynamic range stays high – from club music to a dramatic third act floor reveal – some of the motion does diminish, in line with the story. Voices peek from specific surrounds and ambient wind nicely layers an empty interior scene. Still, the next-gen audio format is a touch of overkill.

Before falling into a typical EPK format, The Zoolander Legacy stays candid when discussing the original. Chatter about sagging box office post-9/11 are honest. Once into sequel discussion, there’s little worth watching, but it’s only nine minutes total. The Man Who Created Zoolander speaks of comedian Drake Sather’s contributions, another feature which stays sincere regarding his involvement. Even though Sather died in 2004, including this over a dozen years later is classy.

Go Big or Go Rome focuses on the setting Eh. Kristen Wiig’s performance is then highlighted in a full commercial for her facial cream, making the case for why her role should have been expanded.

Zoolander 2 becomes trapped between wanting a do-over and being a straight sequel, creating a clash of comedic styles.