B-movie super-producer Nico Mastorakis brought us one of the last gasps of true Eighties-style action in Hired To Kill. His 1990 film loads up on every Eighties trend which made the decade great for action filmmaking. Casting his then son-in-law (character actor Brian Thompson) as a macho mercenary, Hired To Kill is possibly more known for what happened off-camera than what happened on. Veteran actor Oliver Reed was drunk for much of the shoot and a stuntman died filming a helicopter stunt. It’s a shame because Nico Mastorakis created a fun b-movie which marries the Magnificent Seven formula with the A-Team, employing women in most of the roles.

Cult Greek filmmaker Nico Mastorakis writes, produces and directs Hired To Kill with a couple of familiar names in the cast. Actors Oliver Reed (Gladiator, The Brood), Academy Award Winner George Kennedy (The Delta Force, Cool Hand Luke) and Academy Award Winner Jose Ferrer (Dune, Lawrence of Arabia) play roles with Brian Thompson playing lead. This is pure action schlock that would be fondly remembered today if a bigger name like Stallone or Chuck Norris had played Thompson’s part. While Thompson certainly had the necessary physique and presence to be an action star, his limited acting talents were better suited for supporting villain roles. There is almost a certain kind of charm when he stiffly delivers such dialogue as, “Nothing is perfect when women are involved.”

Reed takes every opportunity to chew the scenery when he can, playing his character in a bit of a stupor.

The story is pure Eighties cheese. Beefy, heartless mercenary Frank Ryan (Brian Thompson) is hired by a shady businessman (George Kennedy) to topple the regime of an imaginary country, Cypra. Ryan poses as a gay fashion designer, freeing the imprisoned rebel leader. Ryan is meant to infiltrate the country with six agents, all hardened criminals plucked from prisons that can pass as beautiful fashion models. The catch is the woman leading the team, Sheila, left Ryan to die on a prior mission and there is bad blood between them. Oliver Reed is Michael Bartos, the aging leader of Cypra. There are light political undertones in Hired To Kill’s plot, faint remnants of the Iran-Contra affair, but the narrative is too silly to pack any serious criticism.

Yes, Hired To Kill is a derivative b-movie with a questionable lead actor. It’s so much enjoyable action fun that Hired To Kill overcomes those problems with enthusiasm and a huge dose of everything that made Eighties action films so memorable. There are the extended training montages, this time with beautiful woman prancing around with machine guns. You get Brian Thompson kissing Oliver Reed in one of the more bizarre moments in cinema. Reed takes every opportunity to chew the scenery when he can, playing his character in a bit of a stupor. Given reports from the set, that may have been from his frequent bouts with alcohol during filming.

They don’t make films like Hired To Kill anymore and it’s a shame. Give me this testosterone-fueled binge ride any day of the week over the slick, fairly lifeless action we get today. 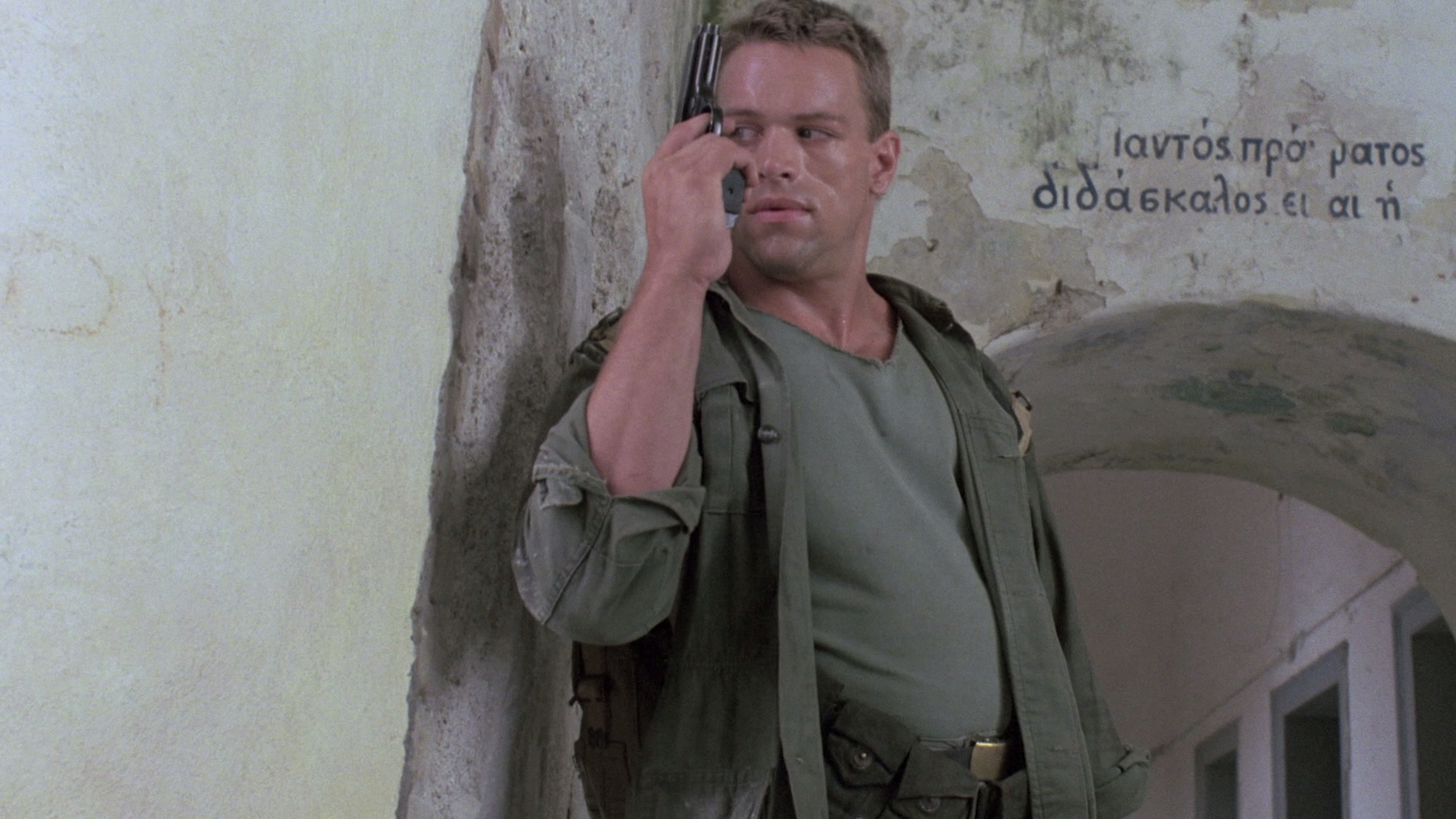 Arrow Video offers up a very solid, director-approved new transfer from a 35mm interpositive for Hired To Kill. The film elements are in excellent condition, a momentary scratch being the sole negative to this clean presentation.

The color correction leans toward the bright side, flesh-tones and exteriors appearing slightly bleached. The 96-minute main feature is encoded in a strong AVC video encode on a BD-50, presented at its intended 1.85:1 aspect ratio.

This isn’t an overwhelming scan glistening with fine detail and definition. The new film scan pulls out decent high-frequency content but the softer interpositive source limits its sharpness. Clarity remains fairly strong throughout the movie, losing some definition in the darker shots. The contrast and black levels are less than stellar but perfectly adequate for this kind of fare.

Two audio choices include the original stereo mix in 2.0 PCM and a 5.1 Dolby Digital soundtrack at 448 kbps. It is disappointing the surround mix is heard in lossy form, as I think its channel separation does provide a bigger experience than the stereo mix. Oddly, the stereo mix has better clarity and tighter sound quality. Given how these have been presented, the stereo mix is probably the better choice with cleaner dialogue and a less compressed mastering.

The two interviews are shockingly candid about Oliver Reed’s on-set problems, which is refreshing. Arrow does up the packaging with their typical class and style.

Nico Mastorakis brings us a classic, b-movie actioner from the tail end of the 1980s.

Click on the images below for full resolution screen captures Due to an error, these captures were taken from the Undercover Mercenary bonus feature, but should be identical to the final disc. Note: Patreon supporters can view these images as .pngs, along with an exclusive.