And Then There Were None is an exquisitely crafted period mystery thriller, perfectly adapting Agatha Christie’s beloved mystery classic. And There There Were None, first published in 1939, is widely considered the esteemed mystery writer’s finest work and reputedly the best selling mystery novel of all time. A co-production between the BBC and A&E, this riveting adaptation adheres to the spirit of Christie’s original novel with a superb cast and wonderful production values.

It is 1939 and the world is on the brink of war. Ten strangers are gathered together to the isolated Soldier Island at the behest of a mysterious U.N. Owen and his wife. Coming from all walks of life in British society, the invited guests include young secretary Vera Claythorne (Maeve Dermody), soldier Philip Lombard (the dashing Aidan Turner), General John MacArther (Sam Neill), spinster Emily Brent (Miranda Richardson), and Judge Lawrence Wargrave (Charles Dance from Game of Thrones). Before all things are said and done, this group will point fingers at each other when they conclude a murderer is among their lot.

Gathered together as a group on their first night on Soldier Island, the guests start getting antsy when their supposed host, U.N. Owen, has not shown up. Soon they will all learn why they have been invited. A gramophone recording accuses each guest of heinous crimes they have committed in the past. Shocked, most of the guests deny the accusations. When one of the guests turns up dead, the inescapable conclusion is that one of them is a killer looking to knock the others off.

Featuring a mature, sophisticated script by Sarah Phelps that captures the essence of Agatha Christie’s mystery, this is a slick period piece that keeps one guessing. Having been adapted many different times for stage and prior film versions, Phelps takes a slightly different tact by thrusting young Vera Claythorne into the emotional center of this classic whodunit.

Actress Maeve Dermody is up to the task in a convincing performance. Claythorne was a governess when the child she supervised died in an accident. All the guests hide dark secrets from their past, which makes solving the mystery that much tougher. Aidan Turner delivers one of the more charismatic turns you’ll see this year as Lombard, a soldier with a dark past.

Considered a prestige project for the BBC looking to make a mark, the all-star cast also includes Anna Maxwell Martin (The Bletchley Circle), Toby Stephens (Black Sails), Burn Gorman (TURN: Washington’s Spies), Noah Taylor (Peaky Blinders), and Douglas Booth (Great Expectations). The bleak, beautiful period setting adds a necessary atmospheric touch that elevates its core mystery. As the characters become trapped on Soldier Island with a killer in their midst, fear and paranoia begins to eat away at any goodwill which may have existed between these strangers.

This version of And Then There Were None is surely to go down as one of the best Christie adaptations. Its smart, elegantly crafted mystery features a deep cast of well-known character actors doing their thing. Slickly directed, this more faithful adaptation is must-see television for mystery lovers. 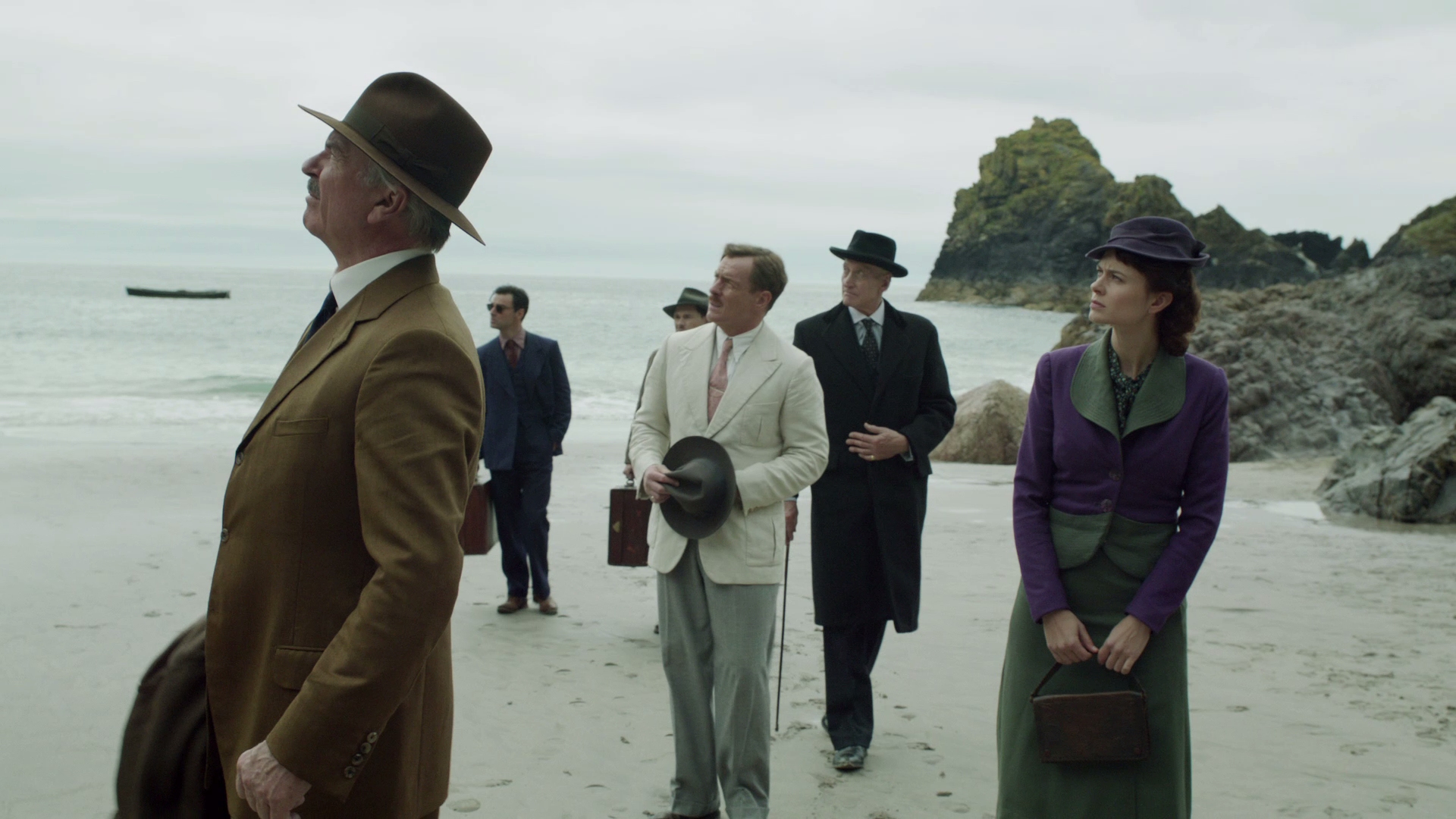 Acorn Media shows And Then There Were None in its best light in this fine Blu-ray presentation. The three-episode mini-series is spread over two discs, a BD-50 and a BD-25. Encoded in AVC around 20 Mbps, the satisfactory compression has no problems other than a faint bit of chroma noise in the darkest scenes. This is crisp video quality with strong definition and unfiltered detail, beautifully highlighting cinematographer John Pardue’s stunning location photography and use of shadow.

A conscious aesthetic difference exists between the immaculate exteriors and darker interiors, especially as the narrative turns more and more around murder. Both are razor-sharp with superior detail, but exteriors show flawless clarity and a sunnier palette. Interiors show less contrast and dimmer light, leading to more layered shadows and darker imagery.

And Then There Were None is a carefully shot period production that looks fantastic most of the time, despite it getting darker and darker as the mystery deepens. Interiors take a small hit in terms of ultimate definition and depth, but this is video meant to impress at all times. Acorn Media presents the native 1.78:1 video in a flawless, perfect transfer.

Dialogue is crystal-clear in its fidelity, nicely mixed and mastered in the soundstage. The sound design is ultimately behind most theatrical productions in expansive immersion but perfect for this engaging murder mystery.

The two-disc set comes with a normal slipcover. The featurettes are well done and fairly interesting, especially the lengthy making-of documentary. Some of the cast appear in short interview segments.

And Then There Was Something (43:07 in HD) – A thorough making of documentary that begins with the first cast read-through of the script and includes participation by most of the cast and crew. Behind-the-scenes material and further insight into the production process helps us understand how the movie was shaped in full detail.

On Agatha Christie (19:53 in HD) – Writer Sarah Phelps discusses her experience with the great mystery writer before coming to this mini-series, among others. The most salient point is that many are only familiar with her work through screen adaptations, which give a skewed perspective on Christie’s talents.

On Bringing And Then There Were None To Life (14:54 in HD) – Writer Sarah Phelps discusses the difficulties she encountered attempting to translate a 500-page novel to the screen. While her script is faithful to the spirit of Christie’s novel, certain changes had to be made or the mini-series wouldn’t work.

Click on the images below for full resolution screen captures taken directly from the Blu-ray. Images have not been altered in any way during the process.
Share Pin Tweet Reddit
Tags •Acorn mediaAgatha ChristieAidan TurnerAVCBlu-RayCharles DanceDTS-HD Master AudioSam Neill