The second part of Mockingjay – profitable and needless as this two-part tactic may be – comes to Blu-ray during the opening salvos of America’s election season. It’s appropriate. Mockingjay splits off from the violent games and propaganda of before. Now the series has shifted toward a power struggle of politicians, asserting their positions as war erupts around their campaign.

For the stakes created, Hunger Games concludes on a plodding, lurching whimper. Desperate for action, Mockingjay’s latter half introduces toothy sewer creatures, something for Katniss (Jennifer Lawerence) to shoot without getting in the way of her morals. Morality has been an anchored theme for the series; now it’s the concentrated focus as civilians become caught in crossfire. Discussions consider the ramifications of war, why people die, and whether any of this is okay. Interesting, yet limp dialog whittles the material down for a specific, impressionable young audience. Scenes are then decorated with attractive special effects to hold attention spans.

Katniss has seen much. She’s weaved through parables of corruption, authority, empowerment, and class warfare. Mockingjay’s goal is to finish that with a feisty romance and rebellion tale. Some of it is alarmingly clear. “We’re fickle, stupid beings with a poor sense of history,” writes one character. Hunger Games isn’t afraid of cynicism when looking at humanity. Political dealings state the best candidate is one without power or money, rather rich in empathy. Material can be detailed and elegant when it wants to be, despite the teen sci-if categorization.

It’s what falls in-between, those weak interactions between characters, simplified and without surprises. As Katniss leads a crew into the Capitol, much of the cast exists to appease the body count. Their deaths explain how traps work and heighten danger, an aimless existence. If there needs to be a reason why novels are not adapted into film directly, Hunger Games has made the case.

If anything, the extension into two films allowed Hunger Games fever to die off. Six years after the last book, Hunger Games was relegated to a second tier of pop culture. Katniss’ feminine empowerment act has been tangled up in the explosion of Marvel properties which have clamored for the market’s attention. The storyline, once mysterious and alluring, faded as the answers poured in.

As opposed to the slew of teen sci-fi/fantasy which has flooded both paper and film markets, Hunger Games still carries weight. Harry Potter’s somewhat plain saga of good vs. evil doesn’t translate socially as the Games‘ violent, politically-charged saga. Hunger Games closes on a distant narrative whimper, but reaching this point means travelling through scripts with considerable morals. Katniss is an exceptional model for compassion. Her tactics in seeing through government propaganda are observant. Always question. Look for the truth. Hunger Games has taught a generation well, even if the conclusion almost feels unnecessary. 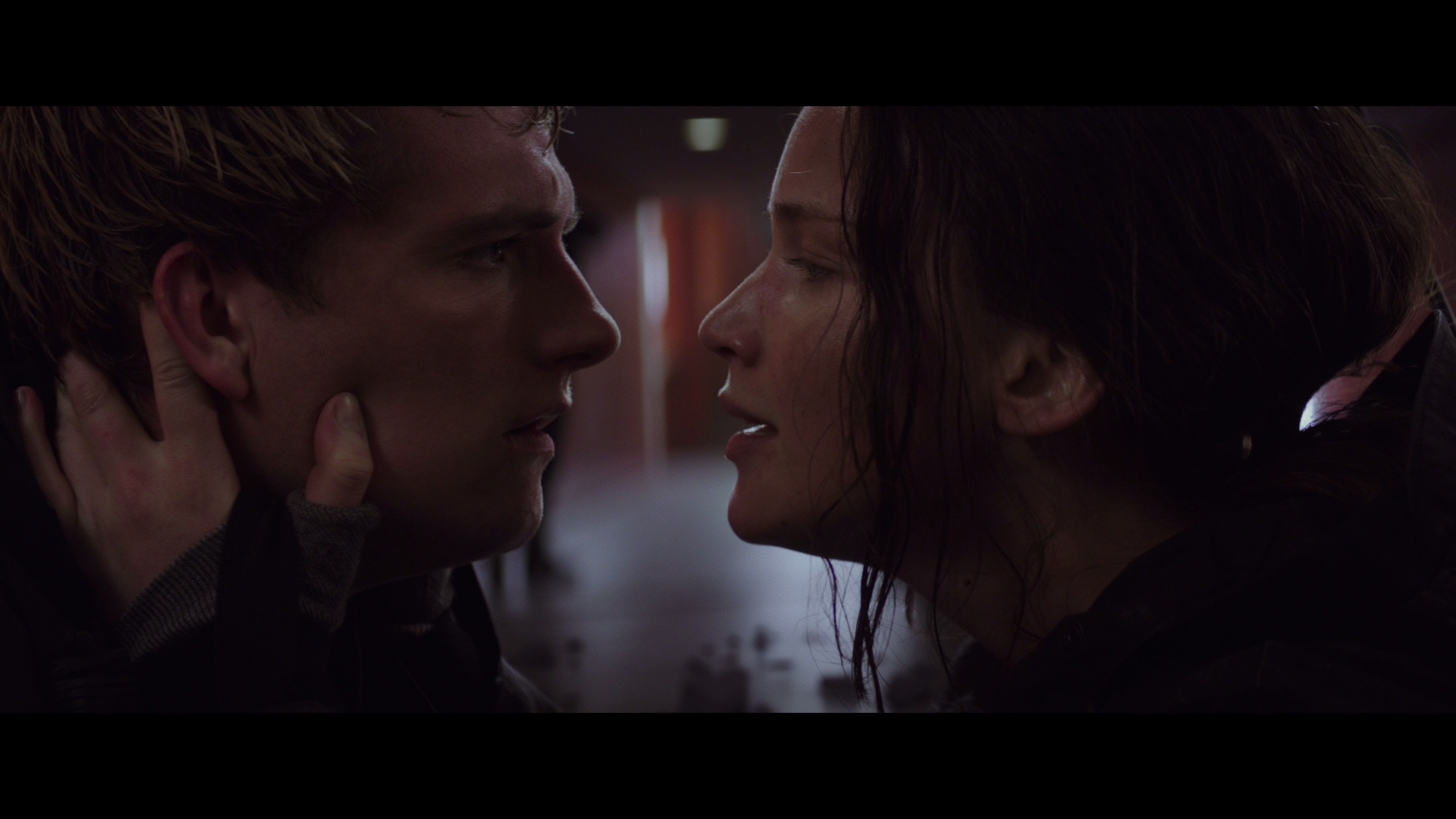 After reaching a visual peak with a stunning 70mm IMAX presentation in Catching Fire, Hunger Games has continued to fall. Digital work in Part 2 proves smeary, messy, and lacking in definition. The color timing won’t help. Blues layer a haze over the image, which when in motion, produces an ugly filtered appearance.

Being close to a major war, Mockingjay’s second half must veer moody. Contrast is dimmed, leaving decent black levels to handle the load. Images lack pop for the sake of tone, acceptable and a touch distinctive considering how blockbusters prefer bloating the visuals.

It’s not all poor. Fidelity has moments to strike. Close-ups, when not in motion, appear stable and defined. Definition has a number of high spots. Visual effects which create full cities bring about some superb images. A final shot, despite a misty look, captures a generous field of grass. When Mockingjay wants to be gorgeous, it can. The rest is bothered by awkward flesh tones and dull palettes.

Lionsgate delivers an encode of this digitally-lensed film free of artifacts despite low bitrates. Problems can be sourced to the original cinematography and style choices.

Pick either a TrueHD or Dolby Atmos mix depending on your equipment. Both are splendid once Mockingjay takes off. Set-up is bolstered by strong ambiance, inside vehicles or on bases. Nearing the action, gunshots fill the distance, pops ringing out from within the city center, far from Katniss. Precision is strong.

A slow unveiling of the track’s capabilities begins with a flooded courtyard full of ooze, liquid slamming down with low-end impact then filling the soundfield. Mixing work doesn’t lose or overwhelm the score. Nearer the end, shoot-outs and rocket launchers become the norm. Positioning excels across the soundfield. While not the action-centric film of previous Hunger Games, what’s offered does excel.

Director of the last three Hunger Games, Francis Lawrence, and producer Nina Jacobson handle commentary. It would have been nice to have author Suzanne Collins’ thoughts at some point. Still, the disc makes up for any loss with Pawns No More, an eight-part making of which runs five minutes longer than the film itself. Each aspect of the production is covered. Casting, effects, adaptation; the run through feels complete.

Production stills from Murray Close are offered for the entire series in a nicely put together gallery. A nine-minute look at the costume design pairs nicely. Jet to the Set chats with the cast while on on-set throughout multiple episodes, some 40-minutes worth of insight. A promo piece for an exhibition of props can be skipped. All in all, a fine way to send off the series in terms of bonuses.