Schmaltzy as Batteries Not Included may be, the film’s residents of a crumbling apartment building and (literally) smaller-than-a-breadbox aliens are too gentle to care. Steven Spielberg’s touch is everywhere as producer and Brad Bird handled partial screenplay duties. The movie was calling for their sappy expertise.

Following E.T. and Close Encounters, the idea of benign aliens resonated deeper into the ’80s. Here an adorable duo fly onto Earth to serve as guardian angels, setting out to help occupants of a New York building.

Caretakers of the old city, soon-to-be gentrified citizens of 817 E. 8th Street battle unscrupulous land owners, a conventional twisting of an old western formula. Setting makes the difference – there is a keen, relevant nostalgia for the era of small family businesses. Corporations erecting their towers next door is more than a story point; it’s a visual metaphor for how New York changed from its immigrant-friendly origins.

Batteries Not Included comes to life as a mixture: simple, somber commentary slathered in accessible sci-fi mixed with big-hearted cartoon humor – hair goes poof with a spark of electricity. Little mechanical aliens create mischief for the kids; adults have the scope of societal change. Few films ever balance their family dramas so richly anymore.

Admittedly cliché and indifferent to the films which inspired/surrounded it, the lessons are genuine.

Minimal attention is levied on the big bads, high dollar executives without ethical standards or empathy. Batteries Not Included has no interest in their cause. They’re financially powerful stereotypes for the sake of story. Then, they’re discarded. The real need falls on a diverse cast who are scrambling to save their home and deal with personal issues. This at a time when reality is being upended by cute extraterrestrials.

Jessica Tandy leads, a meek women suffering from dementia in a performance well above what a film of this limited grandeur calls for. She finds solace in these new visitors who grant her clarity and the giddy sense of family. Hume Cronyn is nigh invincible as her husband (in real life and the film) and lower floor diner owner, kindly and firm. Without them, Batteries Not Included has no heart.

Years on, Batteries Not Included has earned a timeless stamp, a film where neither the period it represents nor the people have diminished its superior tale. Admittedly cliché and indifferent to the films which inspired/surrounded it, the lessons are sweetly genuine. Those attempts to force the issues are defensible – Batteries Not Included spends time with the most honest and human among us. No wonder the aliens are so enamored with this group of tenants. 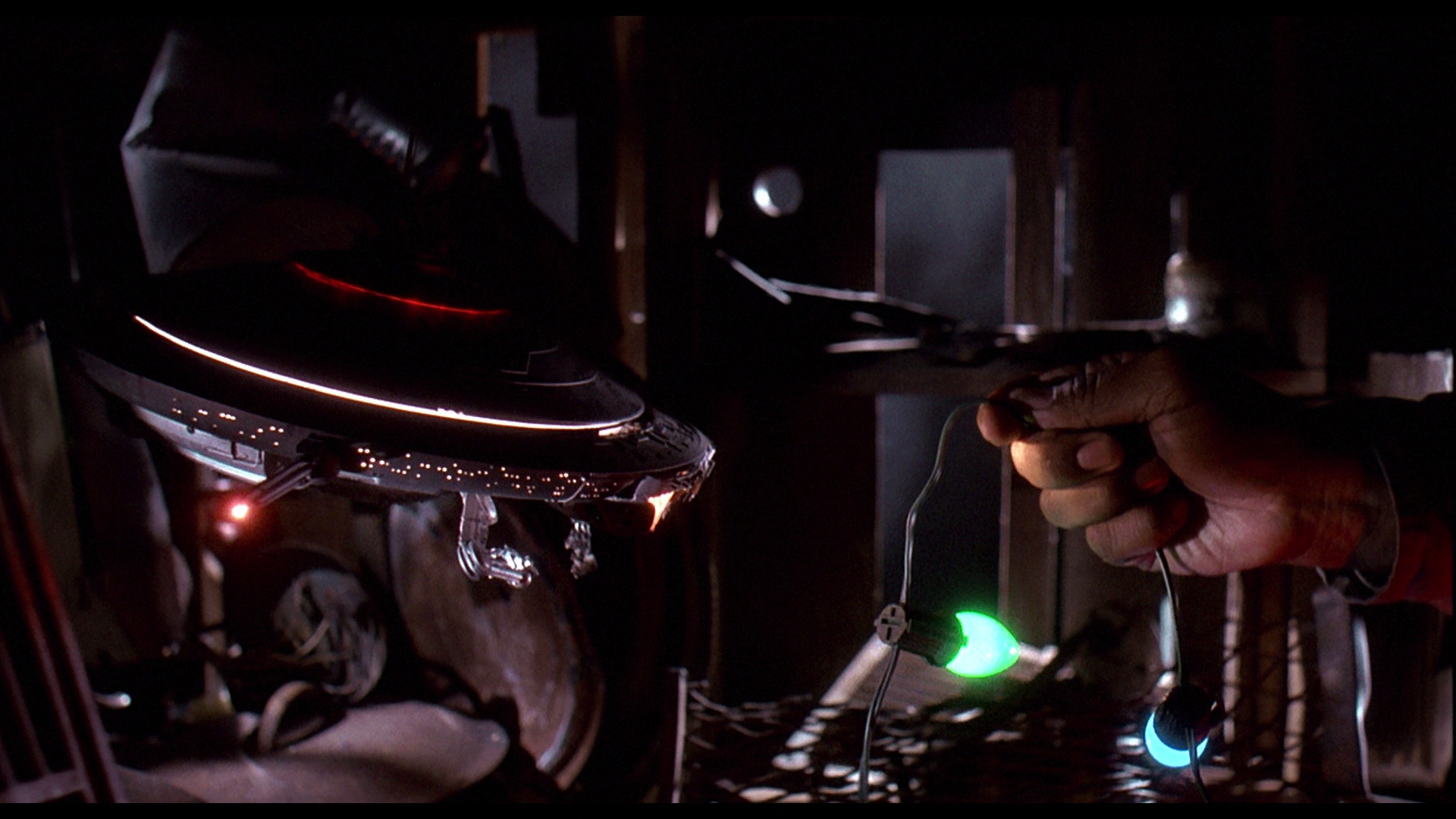 A Blu-ray is better than no Blu-ray for this 1986 film. Universal’s AVC encode shows some of the studio’s worst qualities when handling catalog titles, if to a diminished degree. Pluses first, the print excels. Even with the plethora of analog special effects, the source is maintained sans any scratches or debris.

Colors haven’t faded either. They have immediate impact. Tandy opens the film in a vivid red dress. There’s an assist from contrast too, rich and bright which gives this ’80s piece plenty of life. When called for, night is draped in exceptional black levels with the tiniest hints of crush.

The best news is grain reproduction, or rather the grain still existing to BE reproduced. This was uncommon with Universal for a while. Sadly, there are signs of reduction. Faces have that distinctive pasty look and tend to show a digital haze. A low resolution scan doesn’t help either.

Touch up with a light sharpening application and the end results never fail to appear processed. Clarity can be strong even if actual fidelity wavers. Much can be said for the power of contrast in making something look appealing. That’s the case here.

Given a 5.1 do over, audio won’t indicate any new mastering. Dialog sits immobile in the center while effects drift off extensively into the stereos. It’s a wide mix. James Horner’s pleasant score won’t travel back either. Batteries Not Included stretches the fronts and nothing else, although it does this well.

There is a low-end presence from the music, a clean bass line which follows the length of the film. Fidelity remains high and natural. Thirty years of aging hasn’t dampened the quality.

A VHS-quality trailer is offered as the lone bonus. The film is overdue for a special edition.