Concussion’s complacent attitude toward the NFL’s brain injury agenda is alarming. More so is the influx of corporate whistleblower-esque films. They have poured into Hollywood since the ’90s – Erin Brockovich, Inside Man, Civil Action, Michael Clayton. That we need saturation of these features is alarming. Their rising numbers are indicative of corporate greed, and the formula has become routine – a dismissive corporation writes off a low-level noisemaker, threats are made, noisemaker still wins.

The template is firm, though. They’re easy box office and earn movie studios progressive points. Concussion plays close to the usual genre diagram. Threatening phone calls and unidentified cars tailing family members are tiresome. Add a rock through a window and Concussion would have them all.

Instead of a small-timer-takes-on-big-timer movie, Concussion reverts to a skittish character study of Dr. Bennet Omalu (Will Smith), the man responsible for spotting the existence of brain injuries in pro football players. Although draped by a football town (Pittsburgh) and concerning football stars, Concussion avoids being accusatory, relying on Omalu’s personal relationships and, unusually, his religious beliefs.

The NFL is a background figment, obnoxiously cavalier of the evidence, yet the league never becomes a character. If the sports organization is mentioned, it’s masked by commercial terms, brandishing the game as too important because it’s America’s sport. Superfluous lines like, “They own a day of the week,” (in reference to Sunday game days) is less a condemnation than it is something to inflate the NFL’s egotistical persona – which is everywhere in this film. It may even be this film, despite the suggestion of David versus Goliath politics.

Concussion presents itself with an interesting dichotomy – the African immigrant stepping into a football city and disrupting their business endeavors with facts. At a time when immigrants are shunned, Concussion shows how important it is to have an outsider with a clear perspective peer into our culture. A terrifying thought for some, more so if your profits depend on selling helmet-to-helmet contact which can eventually kill your employees.

The prevalent issue in Concussion should not be the discovery of CTE, rather the dodging of evidence…

But that is a fragment of what Concussion does. An immigration allegory is lost. Concussion limps along with an over-dramatized score, undeveloped stock villains, and the friendly, persuasive African doctor who sits in the middle as a lean hero. Omalu presents as an affable, charming fish-out-of-water intellectual, driven by his knowledge. Next to him is his wife, Prema Mutiso (Gugu Mbatha-Raw), slipping into a dire typecast role – derivative sports movie wife – instead of a woman persuading her husband to fight.

The prevalent issue in Concussion should not be the discovery of CTE, rather the dodging of evidence and twisting of public opinion as made possible by a billion dollar sports empire. Watching Omalu stare into microscope slides is not this story. That’s a minor hiccup in a gargantuan cover-up merely skimmed by the cliché end-credit text crawl.

Distributor Sony’s lack of bite and absent critical perspective appears disingenuous – two bloated corporate entities working in tandem for the sake of their own self-images and personal gain. The suffering shown in Concussion’s story lacks an empathetic touch, and those victims of CTE are discarded as a means to tell Omalu’s story first rather than their own. They deserve better. 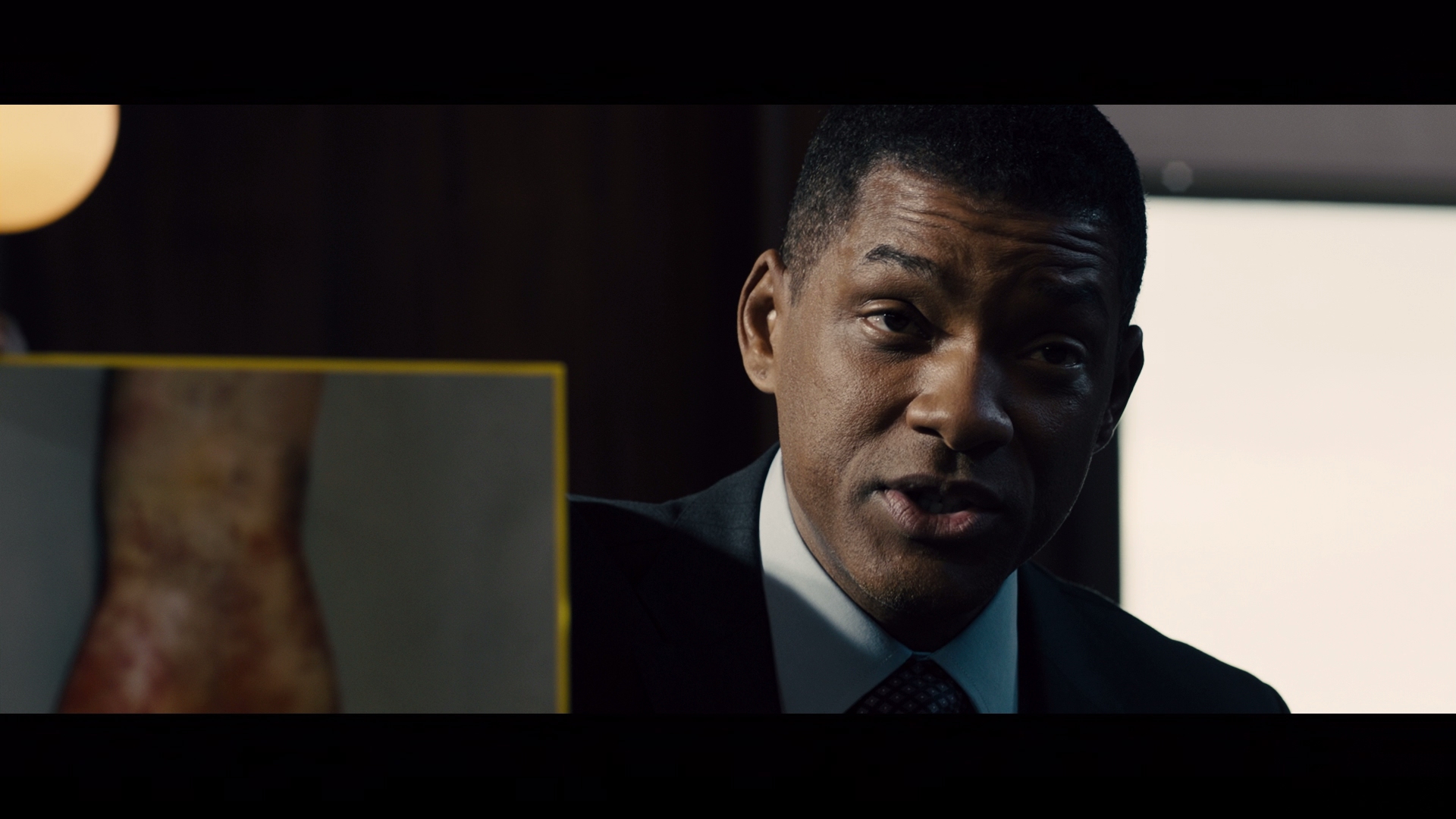 Somewhat repetitious in cinematography, Concussion pieces together mostly in close-ups. Budget conditions do that. In terms of fidelity though, that’s wonderful. Digitally sourced images with firm lighting push incredible detail and natural sharpness. A mild noise layer will have no impact on clarity. When the camera does pull back, especially to reveal Pittsburgh, Concussion proves gorgeous. The city’s skyline serves the film well.

By the third act, a change in location brings sun-drenched oranges. Scenes set in California alter the palette completely. Shadows recede slightly but contrast holds. Sony’s encode has no issue with rendering the images.

Note there are scenes of stock footage and NFL highlight reels. Those are low quality, not in the vein of NFL Films since the league did not license their footage.

There is a small auditory easter egg during an outdoor conversation in the form of a woodpecker. The bird is used as an example earlier in the story. It’s notable since Concussion offers only limited ambiance. Pittsburgh has trains passing through the soundfield and the occasional car.

Any moments of substance happen indoors. A church service is vibrant, the choir reaching all five main channels. Likewise, Omalu’s visit to a club pans around the soundfield while the music acknowledges the low-end. For a drama, Sony’s DTS-HD track is sufficient.

Director Peter Landesman speaks alone during a commentary track, one so sparse, finding spots where he talks was difficult during a scan of important scenes. Inside the True Story recounts the tale at each beat of the movie, bringing in the real doctors who speak little on the actual impact of their findings. Creating Concussion reveals a few tidbits about how the movie itself came to be, while still avoiding anything controversial. Nine deleted scenes (13 minutes) would add limited character if attached to the finished film.

Concussion only pokes at the NFL’s dismissive attitude at the discovery of brain injuries. The feeble character study presented has no bite.