J.J. Abrams isn’t given the freedom needed to create something unique, so he reconfigures A New Hope. This new Star Wars isn’t a story continuation as much as it is a dollop of gooey fan service. Familiar, safe, and cautious, Disney’s take on the Star Wars legacy isn’t new, but it is well textured and appealing. Rey and Finn can carry this next chapter as leads.

Disney’s Blu-ray treatment of Force Awakens is fragmented, although no matter which retailer exclusive one chooses, the A/V side will be identical. This means an often gorgeous and typically stunning disc, flush with visible fidelity from a high-end source. Force Awakens’ blockbuster origins are evident within the perky contrast and superlative black levels. Abrams’ take on the Star Wars saga instantly earns the crown for best of the series given Fox’s sometimes blah Blu-ray work prior.

While the veneer of grain remains evident for the full runtime, Disney’s encode is marvelous. This film-based transfer will pose little challenge to compression parameters. Consistency helps, too. There are no instances of grain spikes or other fluctuation to manage, even with the plethora of visual effects. Fast moving debris fields and hectic aerial combat maintain image integrity.

Whatever a viewer seeks or expects with Force Awakens visual side will be here. Luscious planetary scope, tremendous and firm focus, intricate and unexpected minutiae; you’ll see everything. Captain Phasma’s chrome armor shows fingerprint smudges. Some of them could be defined if needed. Up close, facial definition towers over most. Those who need the tiniest details for costume work will be able to find it when watching. The film’s gloss is wholly retained, and the sheer wealth being shoved onto the screen pours from each frame.

While occasionally producing the sheen of notable digital color grading, most of Force Awakens maintains wonderful, natural flesh tones. Primaries enrich each frame with an attractive saturation. Lifted by the perfect contrast, a sea of explosions, laser beams, and lightsabers reach the home faultlessly. 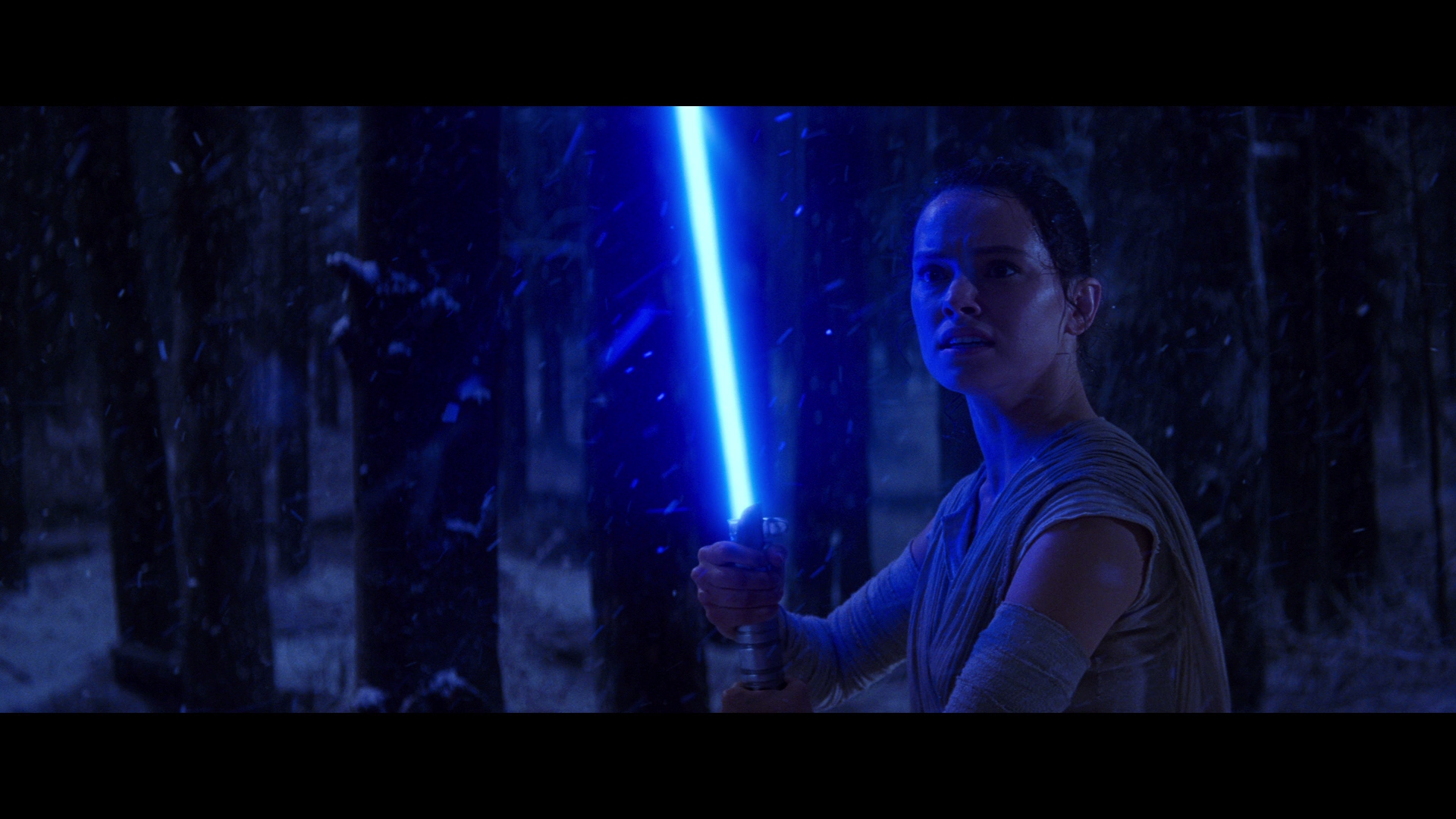 Those so equipped for Atmos will be disappointed since the home edition is lowered to a DTS-HD 7.1 track. Maybe Atmos support is coming in the inevitable re-release or later 3D disc. What’s here now proves bombastic enough though, rallying early with Star Destroyer engines throbbing into the low-end. Separation between channels stretches wide, letting ships fly between speakers as they pass gracefully. First Order’s Stormtroopers continue the tradition of poor aim, great for the home theater crowd who want blaster fire enveloping the sound field.

There are plentiful tricks within the formula. The Tie Fighter/Millennium Falcon chase on Jakku enters into the belly of a decaying Star Destroyer, adding a generous echo to the already spacious soundfield. Such an effect is presented further as Snoke speaks, filling his projection chamber with ambient echoes.

Those needing more LFE are given entire planets going up in deadly fireballs, punching out air to the maximum capability of the subwoofer. This being a one-upping Star Wars movie, there are lots of planets to explode. If you’re more appreciative of low key design, ambiance on Jakku and Starkiller Base excels.

Disney sends out the film with a plethora of different editions, some exclusive to certain retailers. Since the 3D disc is coming later, it’s likely that version may carry added extras. After years of multiple re-releases on VHS, Laserdisc, and DVD, believing Disney wouldn’t continue the trend seems naive.

Anyway, the base set for Force Awakens carries a second disc. All extras reside here. They begin with the four chapter, hour long Secrets of The Force Awakens. They follow production beats in order, from bringing the series to a new company, hiring Abrams, shooting, designing effects, and repercussions of certain story decisions. These are well produced and insightful.

Seven featurettes follow, all under 10 minutes, most of them significantly shorter. A clip show from a table read barely breaks four minutes. A great peek into the process of making practical creatures is worth the time, and so is the six-minute Building BB-8. A look at lightsaber choreography follows, with the rest of the disc leaning toward the commercial side. ILM is given praise for their work, as is John Williams. A short piece on charity work born from the movie seems rather… chintzy coming from a near two billion dollar box office hit. Seven deleted scenes remain, none longer than fifty seconds.