Rebecca Hall and Jason Sudeikis Star in this Rural Romance

Tumbledown is an inoffensive, gentle rom-com that plays it safe. It also happens to be a rom-com light on both comedy and romance. Rebecca Hall and Jason Sudeikis star as two disparate individuals who happen to find themselves writing a book together. Can their testy relationship end in love? The sensitive romance develops in a predictable fashion but delivers just enough of what its audience is looking for to be interesting.

Make no mistake, Tumbledown is predictable entertainment. Pop culture writer Andrew (Jason Sudeikis) is a professor from the city looking to write a book about Hunter Miles, a famous musician that recorded one album and died in a climbing accident. The fictional singer can be taken as being loosely inspired by Justin Vernon’s career as Bon Iver, if Vernon had happened to die after releasing his classic For Emma, Forever Ago album around a decade ago.

Screenwriter Desi Van Til and director Sean Mewshaw were almost certainly thinking of a musician like Bon Iver when coming up with Tumbledown’s story. Hunter’s sole album was a sparsely recorded acoustic album of love songs recorded in his shack, becoming a monster hit. Singer Damien Jurado provides the tunes for Hunter, attempting a cross between Bon Iver and early acoustic Neil Young.

There is a hint of a good story in Tumbledown but that gets lost somewhere along the way.

Hunter’s widow Hannah lives in rural Maine, still hung up on her deceased husband’s memory. Andrew goes to interview the reclusive widow, hoping to include her in his book. After some testy back-and-forth exchanges, they eventually decide to co-write Hunter’s biography together. Hannah is fiercely protective of Hunter’s memory and clings on to his music.

The recipe seems to be all there for Andrew and Hannah as they work together in her remote cabin in Maine for two weeks. Aside from a hunky neighbor played by Joe Manganiello, there doesn’t seem to many obstacles in place of a potential romance between Andrew and Hannah. Dianna Agron plays Andrew’s girlfriend, but she feels like a real afterthought in Tumbledown. In a weird bit of scripting (that feels like it was changed at the last minute), Blythe Danner and Richard Masur play Hunter’s parents that still treat Hannah like their own daughter.

Tumbledown is a light, mostly gentle exploration into the developing relationship between Andrew and Hannah. Jason Sudeikis, mostly known for his comedy, brings more to the table than Rebecca Hall in this romance. Her character remains hung up on her deceased husband’s memory, undercutting the potential romance with Andrew. The script doesn’t give us the usual character moments or bits of dialogue that would have us believe Andrew is falling in love with Hannah. After a meandering opening hour, the script simply forces the issue without giving us a good reason why they should be together.

This is an indie rom-com made with Hollywood talent. There is a hint of a good story in Tumbledown but that gets lost somewhere along the way. This is bland, safe entertainment made with fairly forgettable characters. 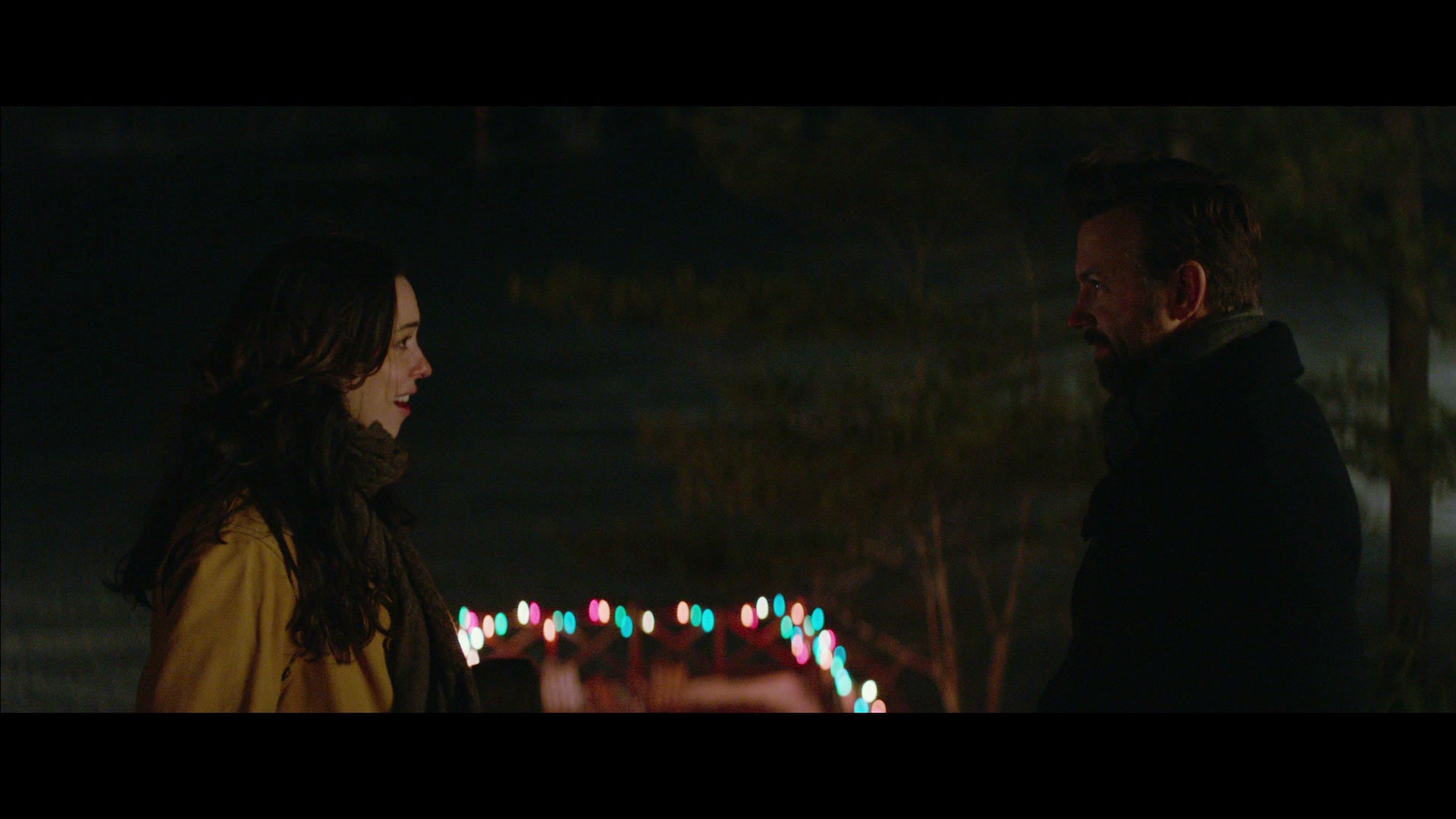 Starz/Anchor Bay provides a nice, attractive Blu-ray presentation for Tumbledown. The main feature runs 103 minutes on a BD-25. Encoded in AVC at below average parameters, the clean video has pleasing detail and sharp definition. It is shown in its native 2.40:1 aspect ratio.

The professional cinematography has a simple, rustic touch that translates into fine picture quality. It does employ more bokeh than usual with a shallow depth of field. Objects in the foreground display excellent fine detail and razor-sharp definition. Interiors show a warmer amber palette. Exteriors have a neutral palette with perfect contrast and crisper black levels.

While Tumbledown never reaches videophile quality, this is a handsome presentation free from technical problems.

This is a dialogue-driven drama without any action sequences, but does include a nice sprinkling of minor surround moments that add extra ambience. The subtle underscore by Daniel Hart is spread around the soundstage.

Optional English SDH and Spanish subtitles display in a white font, inside the scope framing at all times.

The Music Behind Tumbledown (02:48 in HD) – Director Sean Mewshaw and singer Damien Jurado discuss their aims in making the songs of Hunter Miles come alive. The featurette is brief but does a concise job of explaining their process.

The Making of Tumbledown (22:41 in HD) – A surprisingly thorough and lengthy featurette that interviews key cast members and crew. Both Rebecca Hall and Jason Sudeikis appear, discussing their characters and the film itself. Screenwriter Desi Van Til discusses her inspiration and aims in writing it. Some of the interviews end up being fluffy and trite compliments, but also includes behind-the-scenes footage and clips from the film.

A forgettable rom-com built around a fictional singer’s songs.

Click on the images below for full resolution screen captures taken directly from the Blu-ray. Images have not been altered in any way during the process.
Share Pin Tweet Reddit
Tags •anchor bayAVCBlu-RayJason Sudeikisrebecca hallromanceStarzTrueHD