Man of Steel brought Superman into a post-9/11 America, a place where 2006’s Superman Returns was unwilling to go. Old Superman’s symbolic hope and flawless heroism was discarded with Man of Steel. The character entered a shaken nation. Superman had to turn darker and angrier as he reflected the culture which enabled him.

Batman v Superman continues to wrestle with the altered Superman’s philosophy. This is where the film succeeds… almost. Lex Luthor’s (Jesse Eisenberg) angst hinges on a specific ideal – power and corruption co-exist together as they’re ultimately entwined.

Politics intervene, the same idea in tow. A senator (Holly Hunter) questions why Superman is allowed to exist outside of democracy. It’s interesting, and continues what Man of Steel wanted to create for a coarser, post-terrorism mythology. These moments are mere figments of success though.

Citizens in the background of the US Capitol Building hold signs in protest of Superman. They want tighter immigration laws (according to their cardboard scribbles), as if a change in paper policy would prevent interstellar beings from landing on US soil. Maybe they want the Senate to erect a wall around the ozone layer, who knows. No one thinks too greatly in this film, certainly not Batman (Ben Affleck) who cannot unravel Luthor’s plot. Batman isn’t so much a detective now as he is a self-employed mercenary.

Batman v Superman exists in our reality, even though the cities of Metropolis and Gotham do not. This world has notable reporters in cameos like Anderson Cooper. The 24-hour news cycle is perpetuated by CNN. Nancy Grace squawks about the danger of Superman. As a Man of Steel sequel, this all has precedence. It’s a fine idea. Superman, a pure, righteous being, disrupting our world and earning backlash for his morally ambiguous actions. In this movie, we just wait for him to punch Batman – for all of three minutes somewhere near the end.

It’s a film rushing into the superhero cycle, made not for respect of the character or its fans, but because an executive saw another studio making superhero movies.

Batman v Superman releases one weekend prior to professional wrestling’s Wrestlemania 32. Seems appropriate. The film has as much canonical sense as rapper-turned-muscle-wrestler John Cena beating The Undertaker who gains his power from an urn. It’s a film rushing into the superhero cycle, made not for respect of the character or its fans, but because an executive saw another studio making superhero movies. Warner christened this one with a subtitle meant to generate excitement for a sequel – Dawn of Justice (League). How bold of Warner Bros., as if they earned an “Ah ha!” moment over the audience.

Maybe Warner won. Some six months of aggressive marketing dollars (including a Super Bowl trailer) has made everyone forget how social media blew up over Ben Affleck’s casting. Clickbait sites leaped on the angry Tweets. Nearly 100,000 people signed a petition to remove Affleck. It’s history now.

Warner turned the fan base against critical circles. How great it would be for any company to silence its critics and have those it profits from put fingers in their ears. Silence the dissenting voices, use the blind pre-release fan response to instill hype as box office bait, profit. Six months later when everyone realizes they were duped (digital copies and Blu-rays already sold) the cycle can begin anew. 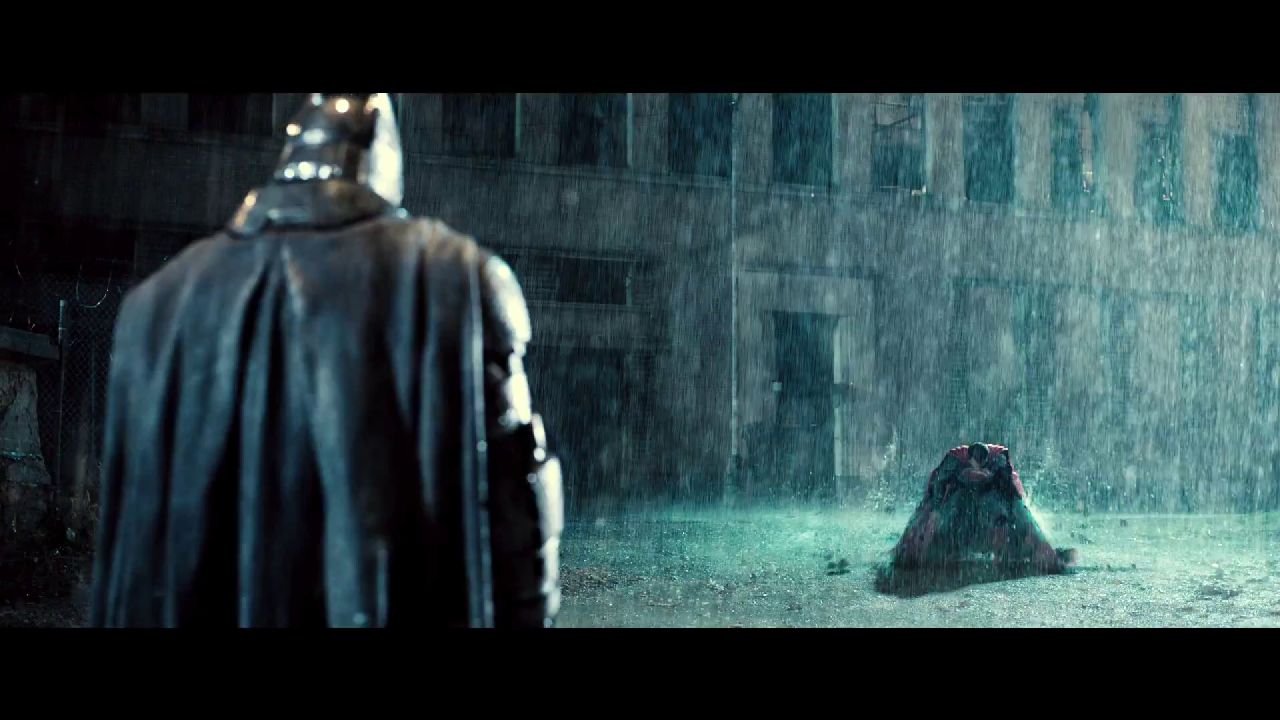 Considering the film incoherent would be kind, centering primarily on the vibrant interpenetration of Lex Luthor. At this stage, Luthor is the stand-in for Warner’s marketing team. He calls for Batman to fight Superman. Luthor is not destroying things, rather turning his critics against each other. In the process, he’s giving the movie’s anti-Superman society what they want to see, and for salivating fans, Luthor is the hero.

In-movie, Luthor’s grand scheme does not peak when he lures the Bat and Supes to brawl over their mommy issues. Rather, his best moment comes early, making congress and the media care about happenings in a small African village.

Audiences are meant to believe Superman is put on public trial for the death of arms dealers. It’s so important, the local paper Daily Planet (which by its own admission is hemorrhaging money), sends their star reporter to cover the problem in person. And this event, we’re told by politicians, is why Superman should be considered dangerous. A Beghazi-ish conspiracy reference, possibly, which ill-functions when in tandem with the decimation of Metropolis one film ago. American people angry over dead, black arms dealers on another continent instead of their own city? No. That’s more implausible than laser beam eyes.

At the point of total loss, the US Capitol Building is destroyed. After smoke clears, Batman v Superman doesn’t care. No one does. After background TV chatter, it’s never mentioned again. An alien ship starts to buzz in downtown Metropolis, as if feeding the anticipation for the title brawl. Luthor is granted his wish – although to what end is unclear – and the spectacle can begin. Batman’s new kill-em-all, outrageously violent persona collides in a brawl fest where impact alone should kill the phony CGI human inside the gray-ish bat suit. The brighter hue of the costume is needed to stand out from the excessive level of blues and shadows Snyder cloaks his characters with.

Of course, there are six or so endings to this smug, pandering slog. Introductions of other DC properties happen in email attachments – and they even have pre-designed logos, to save time in the sequel. Through this, in steps Wonder Woman (Gal Gadot) as DC throws every ounce of their licensing muscle at the screen. Tonality tanks. Batman v Superman initially uses dead serious Christian iconography, and wrestles with Batman’s psyche through (too many) whats-it dream sequences. But those angry-faced close-ups of Superman and Batman turn into witty banter as they battle the physics-less frame of Doomsday. In comics, Doomsday’s appearance was a late ’90s pop culture event. On film, it’s an afterthought of Lex Luthor’s it’s-still-not-clear-what-he-wanted-to-do story arc.

It’s most appropriate to state that Batman v Superman literally ends with Superman rolling in a grave. There would be no more fitting end.

Few super hero films released in the last decade have been this dire, and Batman v Superman may be the sign this genre cycle is at its creative end.