Past the Broken Point

Point Break turns a wacky, early ’90s surfer dude crime movie into a sorrowful, philosophizing snoozer. Disconnect from the lavish, overlong stunt scenes – they appear cut and pasted rather than naturally sitting in the story – and this meandering lug of a film never gains any energy. It’s suffocated by a morose, somber motif which doesn’t mesh with the absurdity of these circumstances.

Eco-terror provides a story vein to work from, but Point Break barely brings up the sociopathic angle until the closing acts. Beginning with a Robin Hood-like spree, the villains rain money and diamonds onto impoverished villages. Nice dudes. Then they leap from mountains in wingsuits which hurts no one. The FBI hates them for it, an agency made up up of old guys shaking their fists and yelling about those darn kids.

Their efforts to minimize inequality is stripped away by eye-rolling monologues about Earth, a better fit for guitar-led bonfire Kumbaya sessions than criminal acts.

The original Point Break is difficult to defend aside from being a guilty pleasure. That movie at least tried to understand the babes-and-dudes-and-waves coastal culture. In comparison, this remake is stuffed with insufferable and belligerent people. They’re vile, surreal, and incoherent in their process. Their efforts to minimize inequality are dulled by their eye-rolling monologues about Earth, a better fit for guitar-led bonfire Kumbaya sessions than criminal acts. “Become the wind,” and other pitiful life metaphors.

Utah (Luke Bracey) isn’t given much to do other than listen. His fiery personality barely shows, only leading to conflicts with all of two people working at the FBI. Such a gratuitous amount of money was spent planning and executing the strung together action scenes, the rest of the movie was devoid of attention.

It’s inarguable that Point Break captures a number of gratifying stunts, all live and with limited visual effects. If something meshes in this disaster of a remake, it’s the idea of respecting Earth and then showing it off cliffside – except for the green screen-rich finale. What came before has merit (helped with a humongous budget), nailing these enthralling-to-look-at vistas.

Point Break’s best qualities are akin to an early HD broadcast – those extreme sport and nature specials meant to wow with their clarity. But the version in Point Break isn’t even pretty, saturated with ugly, pale colors. Those post-production decisions make the boredom worse and the highlights dim. 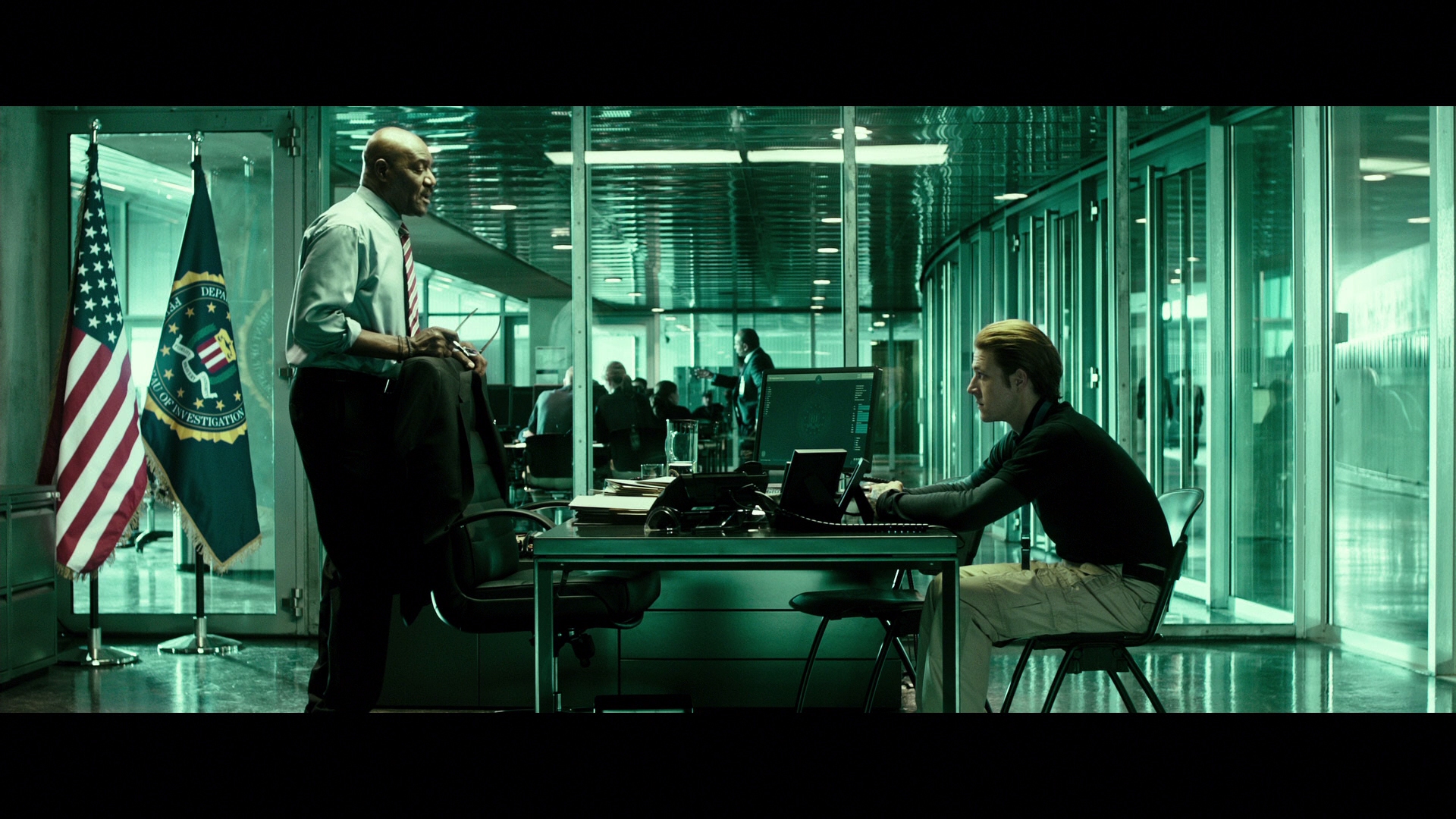 Few films can claim to look as hideous as Point Break, so utterly damaged by the pounding orange and teal color scheme, any positives are crushed under the coloring’s weight. People have day-glo skin, the sky looks jaundiced, and the few fragments of authentic color are brushed with off-whites. If Earth looked like this, we wouldn’t bother protecting it.

Attempts to add artificial contrast blow out highlights and black crush is required to boost dimensionality. Point Break’s aesthetic comes through as fake and desperate for style.

In terms of Warner’s Blu-ray work, their bitrates are far above average for the studio, rarely letting the numbers dip below 30Mbps. And still, faces appear smudgy and splotchy, inconsistent in letting fidelity through.

However, the staggering sharpness coming from the location shoots is alluring. Image clarity has appeal despite a tinge of added enhancement. Seeing mountains and valleys well into the distance help alleviate the disappointment.

An early scene poses a challenge for the compression end, where thousands of individual bills are jettisoned from an airplane. The money pops free toward the camera, filling the screen like a confetti launch. Frame-by-frame scanning types will pick up some artifacts, but they disappear quickly. Of more concern is the gaudy coloring anyway. Teal bills blend with the teal skyline.

Audio presents in a flat DTS-HD 7.1 track, active if devoid of notable activity in those extra rear channels. Even within the heartiest of action scenes, only two surrounds feel engaged. Panning is superb overall. Horsepower from the motorbikes in the opening scenes can be rich, and wind passing during a wingsuit run cannot be missed.

Yet during a shoot-out and enveloping avalanche, the mix has no interest in making use of the added space. Excepting party ambiance, their positioning will be wasted. This track relies mostly on power, making use of the subwoofer for waves during surf segments. The mentioned avalanche carries a mass of weight, if not to the standards set in 2016 by San Andreas.

Warner lost a ton on this one at the box office, so the four featurettes (less than a few minutes each) are extended trailers with a bit of peeking behind-the-scenes. Four deleted scenes only would have slowed things down further.