The Trip is a cult time capsule capturing a specific moment in time from the youthful indiscretions of hippie Baby Boomers. Produced and directed by Roger Corman in 1967 from a script written by actor Jack Nicholson, it is a psychedelic exploration of a filmmaker going on his first acid trip.

Almost as notable for its cast of Peter Fonda and Dennis Hopper, among others, are the instrumental tunes provided by The Electric Flag. Their Acid Rock sound, patterned after groups like Iron Butterfly’s music, was fueled by legendary guitarist Michael Bloomfield in their all too brief but stellar career. Their soundtrack features prominently in The Trip.

Made for American International Pictures on the cheap, Corman creates a mesmerizing, surreal tale built around one man’s personal experimentation with LSD. Working with Jack Nicholson and Peter Fonda in The Trip, this same trio would soon go on to make the counterculture classic Easy Rider in 1969.

Employing a litany of psychedelic imagery and hypnotic scenes set to long stretches of instrumental Rock music, Corman gives us a hallucinatory onslaught that would have been considered wildly experimental in 1967. In many ways, The Trip is years ahead of its time with its dream-like narrative and nearly plot-less storytelling, incorporating ideas taken from Fellini and other European filmmakers. It was so radical that AIP forced Corman to add a prologue and alter the ending, possibly minimizing the movie’s seeming endorsement of LSD usage.

Paul Graves (Peter Fonda) is a commercial filmmaker in the throes of a divorce with Sally (Susan Strasberg). Hoping to unwind from the stresses in his life, Paul meets with John (Bruce Dern), a friend and LSD guru of sorts that promises to help Paul with his first acid trip. They go to see Max (Dennis Hopper) at his commune, a drug dealer and hippie personality that has LSD and plenty of other drugs. Soon after Paul takes the LSD, his acid trip is conceptualized as a long, wandering sequence of strange, beautiful and haunting images. Can the experience lead Paul to a personal revelation and help solve his crisis?

Paul experiences bizarre, symbolic dreams on his acid trip as he wanders the city, stoned out of his mind. He sees himself dressed in white, chased by riders in black robes on horses. He thinks John is dead at one point, fooled by a hallucination. There is a surprising amount of cohesion to his visions, the experimental sequences help unveil Paul’s innermost feelings almost as well as a traditional narrative.

… one of the few psychedelic movies made in the Sixties that still holds up today.

It all culminates in a logical place, providing Paul a cathartic release. The underlying message does imply benefits to using LSD, but the movie doesn’t shy away from the negative consequences of a bad trip. Paul wanders through a stranger’s home before the owner threatens to call the police.

One of Nicholson’s several collaborations with Roger Corman, including The Little Shop of Horrors and The Terror, this is one of the few psychedelic movies made in the Sixties that still holds up today. The Trip is a movie with several fascinating elements, from its extended Acid Rock musical soundtrack punctuated by long instrumentals from the Electric Flag, to Corman’s daringly stylistic direction with experimental florishes.

Written with a florid ear for hippie dialogue and packed with dated lingo to modern ears, it’s groovy as people would have said in the Sixties. This is some of Corman’s best work, the veteran b-movie producer and filmmaker had already made dozens of movie by this point and knew his craft thoroughly inside and out. The experimental movie showcases his keen grasp of storytelling in an unconventional manner. 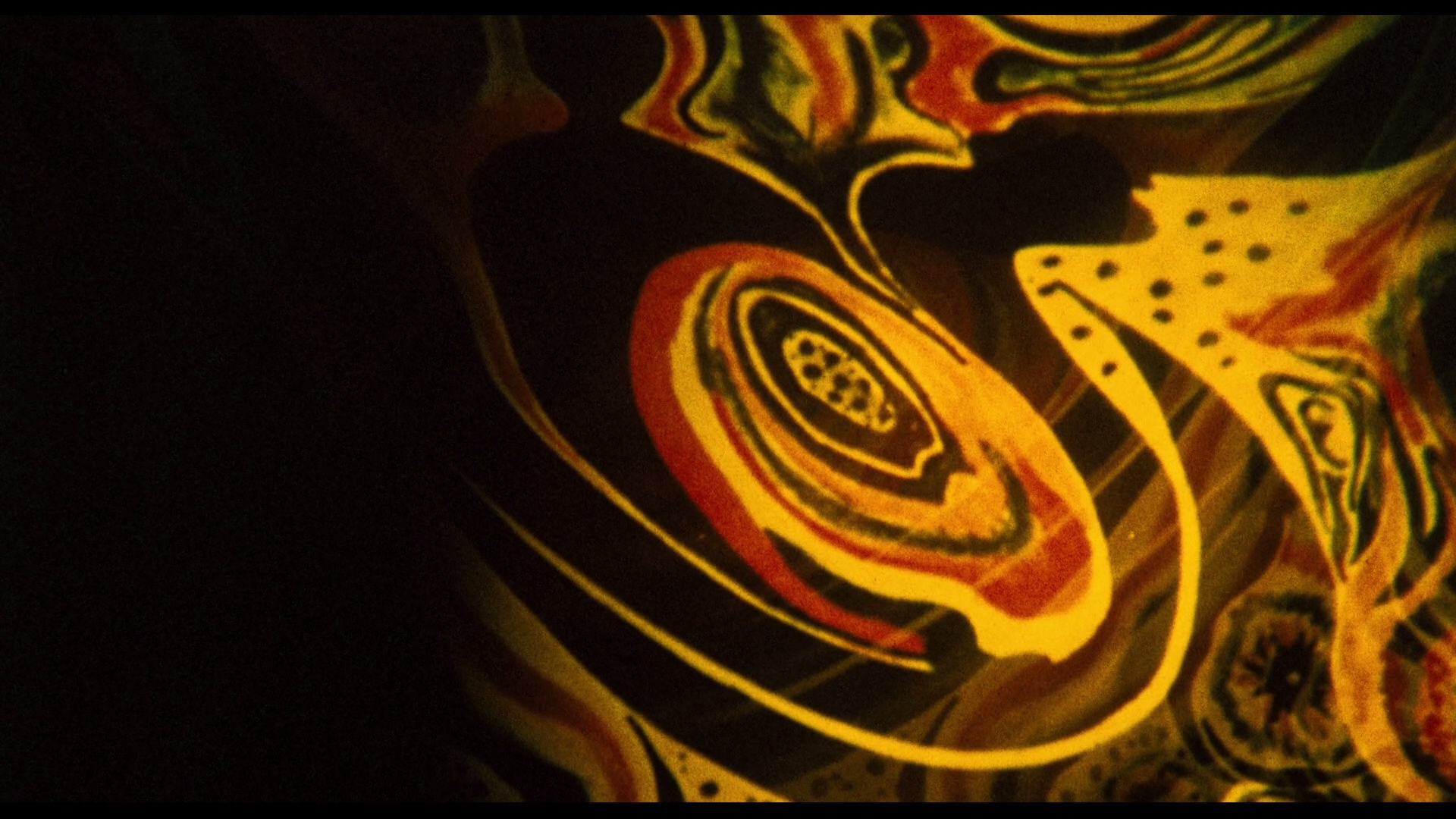 Olive Films has been known to strike new transfers for some of their licensed releases and The Trip appears to be one such lucky winner. First released by American International Pictures, The Trip currently resides in the MGM library. Olive Films has licensed The Trip from MGM for this fantastic looking catalog presentation.

The psychedelic movie receives a striking new film transfer from solid elements, possibly done at 2K resolution, bursting with vivid detail and color. Clocking in at nearly 82 minutes, the main feature is presented in its expected 1.85:1 aspect ratio. Encoded in a completely transparent AVC video encode on a BD-25, this is one of Olive Films’ best-looking vintage catalog releases on the format. The original elements appear to have aged well with virtually no significant degradation.

The 1080P video has excellent, pure film definition and clarity. Packed with fine detail in sharp resolution, the consistently stable picture quality is unprocessed. Solid black levels and a punchy contrast help the vivid, film-like atmosphere. Corman does go softer with the cinematography in Paul’s hazier dream and fantasy sequences, providing a stark contrast with the sharper tone seen in Paul’s reality.

One of the big reasons behind The Trip’s cult success over the years has been its soundtrack, performed and composed by The Electric Flag. Going under the name of The American Music Band in the credits, The Electric Flag had one of the all-time great guitarists in Michael Bloomfield. They provide the entire Acid Rock instrumentals that accompany the extended psychedelic scenes. Fans of their classic A Long Time Comin’ album won’t find much music that resembles their trademark sound in The Trip but should still find it very interesting.

Olive Films includes the original mono audio in a smooth 2.0 DTS-HD MA selection. This is a capable, punchy mix with fine dynamics. A few scenes include muffled dialogue but nothing that seriously interferes with its intelligibility. There is enough low end to make the music’s presence felt and its fidelity sparkles with clarity.

Like most of their releases, this Olive Films’ release does not include subtitles.

Olive Films includes the film’s trailer as its sole bonus feature, though disguised in a plain menu which includes unlisted buttons. It’s a confusing, poor design which almost made me miss the trailer’s inclusion.

The disc pales in comparison to the region-locked UK Blu-ray in terms of special features, with a Roger Corman commentary and several featurettes, including the original, alternate ending he wanted.