Some movies turn out well in spite of studio interference. Disturbing Behavior is one such example mostly thanks to its talented cast of future stars. It is a simple but fun teen horror movie that came out in 1998 starring Katie Holmes and James Marsden. The MGM film was one of the last of a dying breed, an R-rated horror film made by Hollywood aimed explicitly at teenagers. Changing box office economics would soon eradicate them.

Director David Nutter had cut his teeth directing episodes of The X-Files. It’s not fully clear how much of this film’s final edit is his alone. The deleted material and the movie’s abrupt narrative gives us some idea that studio interference shaped the final product a great deal. While the teen horror flopped at the box office, DVD gave it new life as everyone wanted to see the girl from Dawson’s Creek in a horror movie, years before she would become Mrs. Tom Cruise.

The plot is a teen-focused spin on simple themes that have been a staple of horror films going back decades, reaching back as far as the original Invasion of the Body Snatchers and hitting fruition in The Stepford Wives. Steve Clark (James Marsden) and his family move to Cradle Bay, hoping to change their lives after Steve’s brother committed suicide. Steve is an ordinary teenager trying to fit in at his new school, Cradle Bay High School. He soon learns the school has a well-structured social pyramid with a group calling itself the “Blue Ribbons” found at the top.

The casting is phenomenal, catching a confluence of Hollywood talent that would all go on to have long careers…

The Blue Ribbons appear as perfect, model students if you ignore their occasionally violent outbursts toward outsiders. Steve’s new friend, Gavin (Nick Stahl), is on the outside of this group, far removed from their lofty status at the school. Gavin claims the Blue Ribbons have somehow been brainwashed, turned into model students against their will by some outside force. It’s not an original idea in horror but is sold by the cast’s fine acting chops.

Steve meets Rachel (Katie Holmes), the du jour bad girl with a reputation at the school. The movie skips over her character development but repeatedly reassures us that Rachel is a wanton young woman. Steve falls practically in love with her at first sight. Rachel, Gavin, and Steve start to figure out something bad is happening with the Blue Ribbons and soon the Stepford students will aim their focus on this motley group of outsiders.

One could focus on Disturbing Behavior’s negatives but the disposable teen chiller entertains in spite of its limitations. The casting is phenomenal, catching a confluence of Hollywood talent that would all go on to have long careers after Disturbing Behavior. Even the throwaway roles have actors that would go on to bigger and better things like Katherine Isabelle. She plays Steve’s young sister. The adult roles have a host of veteran character actors like Bruce Greenwood in a critical role and William Sadler as a kooky janitor. It all meshes in a fun ride to the end, including a couple of fantastic set pieces for horror fans. 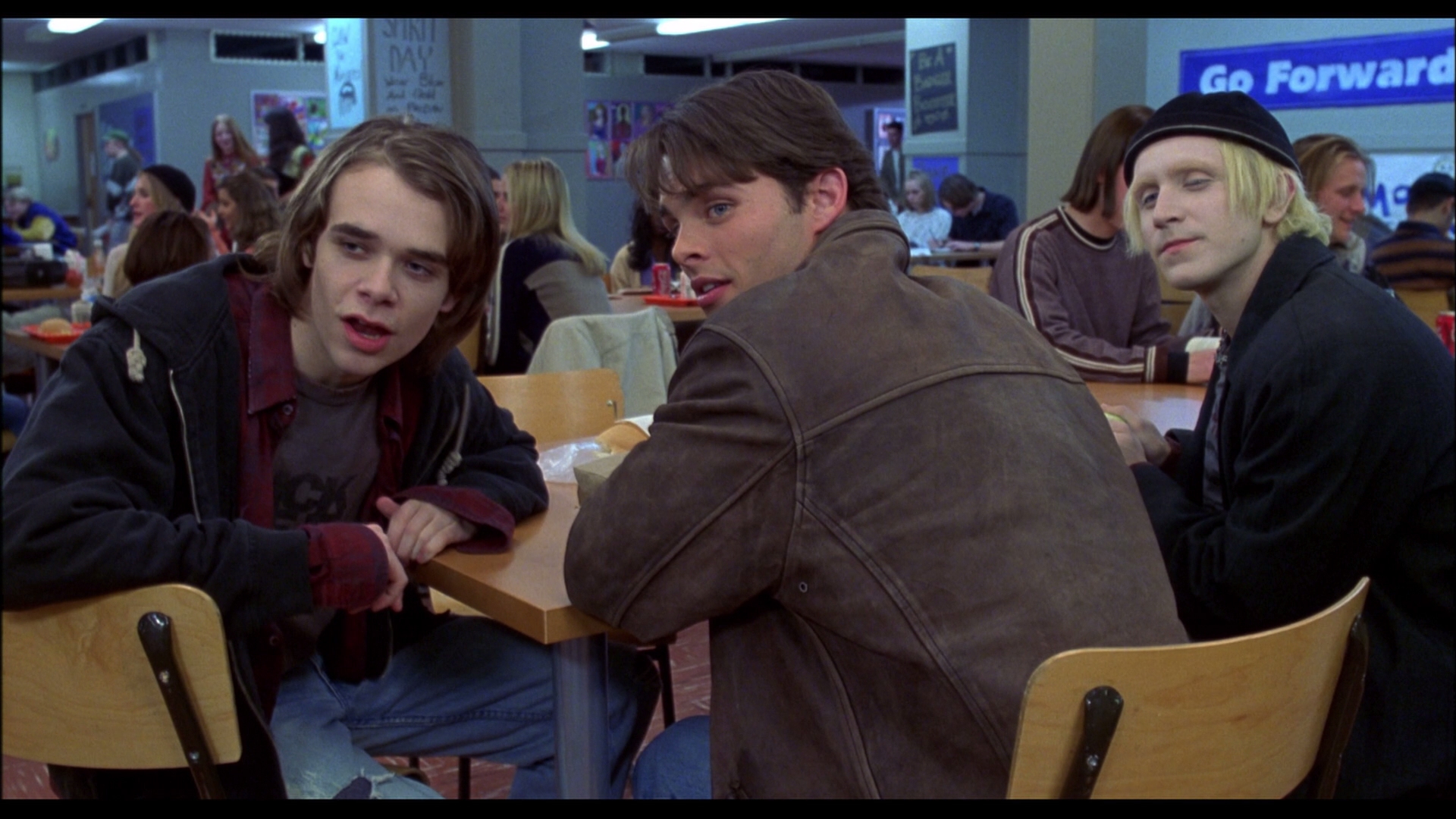 Scream Factory has licensed the 1998 horror movie from MGM, which usually doesn’t portend great things in the video category. What we get is an adequate, dated high-definition film transfer presented in a fairly flat 1.85:1 aspect ratio. The 83-minute main feature is shown at the standard 1080P resolution in a satisfactory AVC video encode. Issued as a BD-50, the video encode’s high parameters can’t completely lick the faint chroma noise and exposure issues in the darkest scenes.

The older transfer shows a bit of processing. Its detail is on the dull side, rolled off and lacking the crisp definition of a new 2K film scan from the original elements. This appears to be a softer telecine struck some years ago. What the video does have going for it is a consistent contrast with nice clarity, taken from elements in clean, undamaged condition.

It doesn’t exude great depth or sharpness but certainly provides a serviceable Hi-Def presentation. Black levels are severely tested in the opening act – the memorable opening scene looks awful with poor shadow delineation and soupy grain structure. Thankfully, that does improve once the movie gets past the first reel.

This Blu-ray’s video could have been improved with more money thrown at it. Scream Factory has taken their standard “do-no-harm” approach to a licensed transfer, which is probably for the best with these unloved catalog movies. Disturbing Behavior looks acceptable on Blu-ray but keep expectations in check.

Disturbing Behavior has a fairly nice 5.1 DTS-HD MA soundtrack for an older horror movie. One of the early horror hits on DVD when it first came out in 1998, the surround presentation features a nice presence with discrete sound design.

Active surrounds were still relatively uncommon at the time, Disturbing Behavior’s audio was clearly designed with an eye towards home theaters. Mark Snow, veteran composer of The X-Files, turns in a spooky score that spreads out in a diffuse soundstage. The wide dynamic range does lead to some minor instances of muffled dialogue.

Scream Factory brings over the special features found on the ancient MGM DVD, including an unusually large amount of deleted scenes with optional commentary from the director. It is apparent that the studio hacked his film to death. Deleted scenes show glimpses of a much more involved backstory and further character development.

One missing supplement to mention is a lengthy featurette found only on the German DVD. The original DVD had a 4-page booklet of quotes from the cast that is absent as well.

Audio Commentary – Director David Nutter had cut his teeth directing television episodes, most notably The X-Files. This is a lucid monologue by him but one that isn’t particularly exciting.

Deleted Scenes With Optional Director Commentary (24:42 in SD) – A wealth of character development one could call essential is found here in this extended batch of scenes, including an alternate ending that would have been more satisfactory. Nutter tells where in the story each scene would have fit. Already a very short movie, some of these cuts make little sense, including a lovemaking scene by Katie Holmes.