The Good Dinosaur’s best storytelling comes when it’s voiceless. Animation can handle the performance, enough to tug on emotions. The same can be said for Disney’s limp Dinosaur (2000), opening with a mesmerizing introduction, flattened when everything began to speak.

By speaking, Good Dinosaur reveals a young apatosaurus Arlo (Raymond Ochoa) who begins a quest to return home after falling victim to Disney’s grandest cliché – the dead parent. His adventure goes through predictable paces, either advertising action figures of pointless, one-off characters or dealing with cliches. Where there are rapids, there are movie waterfalls. Good Dinosaur is not the exception.

This is a movie staggering in beauty too. Although aesthetics clash, the overwhelming serenity and beauty of the untouched landscapes trample anything Pixar (or another studio) has done previously. While their realism lacks design character and the squishy cartoon dinosaurs feel out of place, the technical prowess on display is nothing less than a jaw-meets-floor showcase for animation nerds.

Digitized mother nature carries Good Dinosaur. There is little indication of what makes this dinosaur “good” in comparison to the others he meets. A friendly Tyrannosaur seem awfully “good” too as Arlo tramps through various genres. Those ‘Rexes plant him within a western; the main interactions are that of a buddy comedy, albeit with heart.

If Inside Out serves as Pixar’s A side, Good Dinosaur occurs when flipped over to B.

Stories of production troubles surround Good Dinosaur. Pulled directors, changing voice casts, studio layoffs; nothing appears to have happened correctly aside from the talents of the background artists. If Inside Out serves as Pixar’s A side, Good Dinosaur occurs when flipped over to B. (Cars 2 then is the rejected single the artist won’t discuss, or has burned to prevent escape into the public.)

Pixar’s name is a burden for Good Dinosaur. Their creative output backfires with this pedestrian, alarmingly typical tale which neither employs ingenuity with regards to its dino-theme nor something thought-provoking. It’s not satire of a genre. It is devoid of risk. That’s not the expectation – Pixar keeps other animation studios in check and furthers the medium away from cross-overs and side-stories. Somehow, Good Dinosaur becomes a victim of their process. 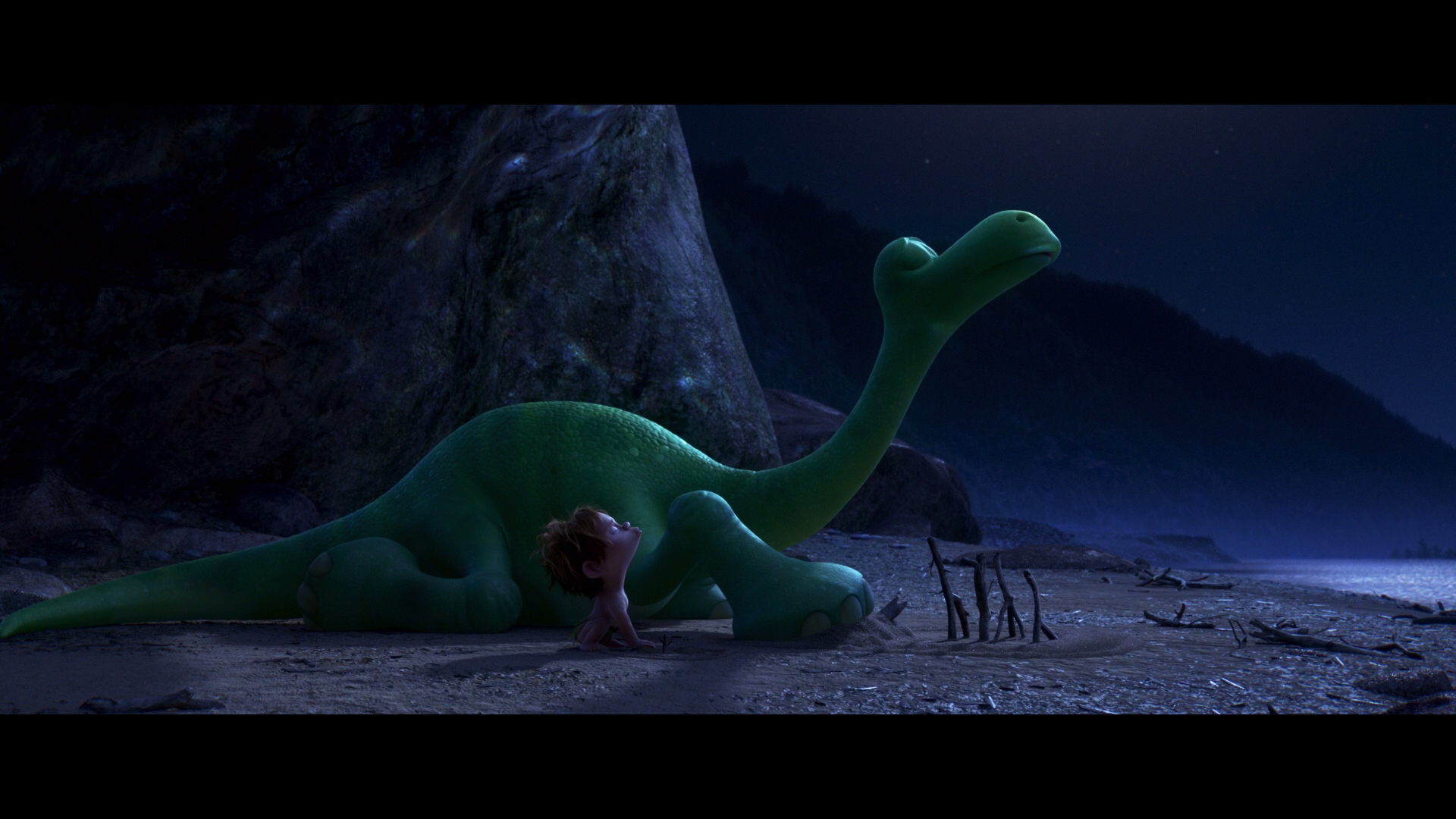 Use this one as your theater’s demo disc. You need to know nothing else.

But you’ll probably be angry if there was nothing else, so fine. Good Dinosaur on Blu-ray is glamorous, the type of animated feature which stampedes the ones which came before. There’s been a new one every other year or so. Technology dictates as such.

So what’s here? Astonishing landscapes, mostly. Real world cinematography could never pull this much detail from trees or grass. Stacks of hay? You could find the needle just by looking. Mountains deep in the background reveal small cracks and crevices. Human and dinosaur are both textured, even if Arlo sort of looks like he’s made out of green styrofoam.

Animation won’t succumb to any aggressive color timing either. Primaries spill from each frame. Blue skies, green grass, fall-colored trees – pure HD luxury. Disney’s encode is pretty dang amazing too. When challenged by a flock of birds, there appears to be compression artifacts. Pause and you can see it’s merely the motion blur effect seen en masse.

While great on the major moments, Disney’s DTS-HD 7.1 (also 5.1, but why would you want that?) doesn’t act aggressive. All of this pre-history scenery adds little to the soundstage. Ambiance is flat. Activity can be precise – there are numerous moments where objects pass off screen and into stereos or rears. The low amount of such activity will be the loss.

Good Dinosaur handles rain. Actually, water in general is a specialty. A flood runs through each channel and kicks up the subwoofer. Same goes for a short wind storm. Low-end work as larger dinosaurs march across the frame has weight, if lessened from what many in the community usually expect.

Extras are extensive in number if not in depth. A crowded commentary from the creative team – including director Peter Sohn – has plenty of goodwill from the key players. A handful of short features are dull. A collection of disconnected visual gags fill Dino Bites, and Hide and Seek is only one minute long. True Lies About Dinosaurs comes in at two whole minutes, dissecting the cheats about dinos needed to tell the story.

Pixar’s heart comes through in Recyclosaurus focusing on the studio’s competition to create dinosaurs from unwanted office items. The creativity is endless, even in the real world. Peter Sohn returns for Director’s Journey, putting him in a challenging role to deliver Good Dinosaur quickly even though this was his first feature. Every Part of the Dinosaur peeks in on animation and how they applied techniques to give the creatures style. Next is Follow the T-Rex trail, going with the team on a road trip to location scout for reference. Deleted scenes are short but do offer an intro.