Visit Hotel Transylvania where the generations clash on civil rights

Sony’s sequel has an undercurrent of gay rights; maybe the Supreme Court decision was the jumping off point for this reconciliation of the species off-screen. Hotel Transylvania 2 is generally plotless otherwise, mixing the goofiness of the ’60s TV show The Munsters and the tiresome sitcom baby routine. Do your characters have nowhere left to go? Give them a kid.

So it does. Here’s Dennis, a sort-of-but-maybe-not vampire offspring of a vampire girl and valley (human) kid. Dennis must wrestle with his young identity, pushed along by granddad Dracula (Adam Sandler) to take risks and do more “boy” things. Hotel Transylvania 2 touches briefly on the cushion-y treatment of the younger generation – participation trophies, safety nets – and then with some 20-minutes left, spins up a vapid arc about seniors disassociating with social change. This in a movie riffing on Universal’s assortment of classic black-and-white critters.

Kids walk away with a positive message to be yourself, at least until the third act upends that theory.

The movie needed a narrative to branch out these themes. A generational conflict seems sufficient until Hotel Transylvania 2’s gargoyle villain… thing begins shouting at the kids who think monsters and humans should play together. “You’re wrong!” screams demon-thing like a great uncle’s holier-than-thou, hyper-conservative all caps Facebook post. There’s a fight over the comments because the story needed some action, and then, probably another sequel. What a bizarre movie this is.

Kids walk away with a positive message to be yourself, at least until the third act upends that theory. Turns out the story is more concerned with Dracula’s daughter Mavis (Selena Gomez) than her son Dennis as she wrestles her identity. In-between are disconnected hijinks with Drac, grandson, and the other monsters, filled with out of place non-secateurs (pulled from an alternate opening), none of which lead anywhere in the larger narrative structure.

These movies are successful. Kids must find the menagerie of color suitable and Sony product placements inoffensive. Monster hotels use Vaios if you didn’t know. Hotel Transylvania only had a little spunk to work with. The follow-up isn’t doing much to capitalize on the idea. A voiceless blob/jello mold creature is added to the main mix, great in all three minutes of his (?) screen time. Everything else is domesticated comedy with a hollow connection to civil rights. 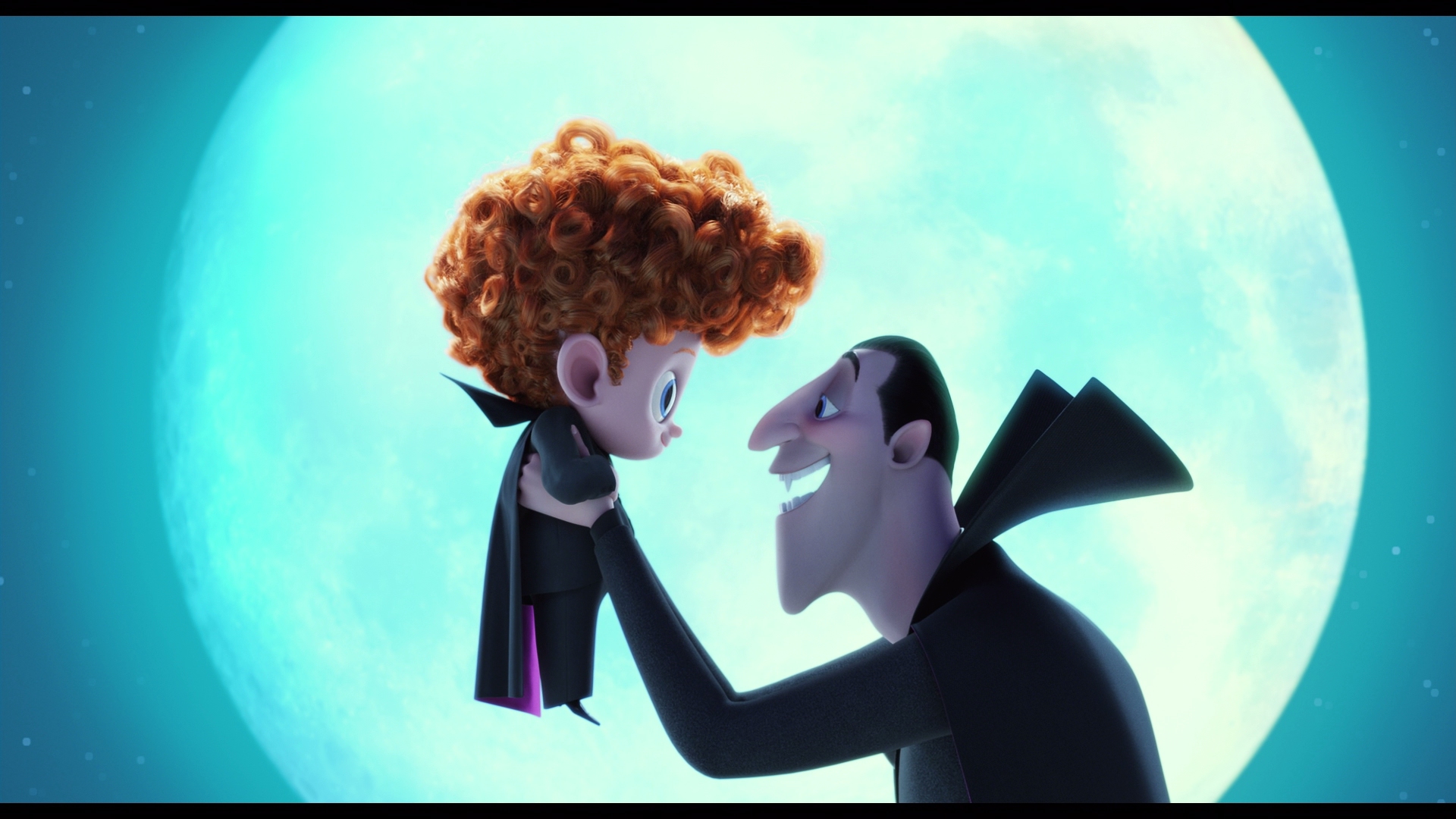 Flushed with an expected color and dazzling with texture, Hotel Transylvania 2 is a purty one. An animation challenge was certainly Dennis’ hair, a slew of red curls which are defined individually, puff out when he’s active, and bounce to give the character some zest. While skin texture is only passable, the amount of oddities on display make up for the loss. Mummy’s dirty bandages, Blob’s reflective hide, human sweaters; they’re all impressive.

Hotel Transylvania 2 has plenty of visual vigor, nicely rendered with some extended darkness during a late night road trip. Dimensionality remains muscular throughout. Contrast is vivid inside the brightly lit hotel.

Bundled with Sony’s encode, Hotel Transylvania 2 is a sure thing. Note the source material doesn’t carry the whiz bang might of Pixar. This is sort of middling between cheap Open Season sequels and those high-budget Disney outings.

Audio work on the part of this DTS-HD track is a touch disappointing. With the freedom afforded to animation and sound design, Hotel Transylvania 2 is not fond of stretching from the center too often. Stereos and surrounds are used when cars pass through the soundfield. Flying scenes have an energy too.

Presence is light though, wherein the hotel never feels up to capacity and the city never lively. Take notice of a rickety tower during a flying lesson which was all over the trailers. There, creaks of the wood are made prominent in the rears. It proves the additional channels are in use.

Subwoofer work stays with the soundtrack. An explosion barely registers. A handful of scenes ever need the low-end support anyway. Some of Frankenstein’s footsteps pound, although lightly so.

Great films are sometimes left with no commentary yet Hotel Transylvania 2 is given two separate tracks. Director Genndy Tartakovsky produces a commentary alone while Adam Sandler writer Robert Smigel and producer Allen Covert. Most of the bonuses are fluff, stuff like sing-a-longs, music videos, featurettes on new characters, and how to draw items meant to help the brand catch on.

Ignore those. The 17-minutes of deleted scenes are interesting for what was kept. It’s clear parts of the animation were completed for certain scenes, then deleted until another space could be found for them, explaining their disjointed inclusion. A bit on foley audio is aimed at kids, but the reveal of where the effects come from is interesting to watch. Finally, a featurette on character design and style is fun, albeit short at only a few minutes.