Heart of the Beast

Much of In the Heart of the Sea is shot with majesty, proud and glamorous as a crew of whalers battle a fattened, angry whale – Jaws, but bigger. The camera (a virtual one anyway) which visually canvases the creature adores those moments where its body shoots from the water. People are silhouetted; the whale sets the visual impact.

Marketing makes a to do about this being the real world source for Mellville’s Moby Dick, a throbbing, even oversized sea adventure which peters out into 90 isolated days on the ocean. Dramatic, certainly. Gruesome decisions wear on the survivor’s humanity, a ghastly peak for Heart of the Sea’s second half. There’s enough character to elicit emotion when certain players pass.

Trailing Moby Dick, the material lacks thematic weight. In the latter half, Heart of the Sea feels identical to last years Unbroken. Bad timing, of course, yet the repetition is hard to shake. (It is admittedly absurd to eye roll such a survival story based on film adaptations, but blame the studios.) People came for a whale. They get gruesome make-ups and terrifying weight loss.

Moby Dick isn’t pushed on high school kids for its whale, rather its textural undercurrents. Heart of the Sea becomes a story about returning home, with Melville writing his novel as the framing device. All of the grand effects work cannot cover a plain story of endurance, of which Ron Howard appears to adore – Backdraft in fire, Apollo 13 in space. Now he has his water movie.

If there is subtext, it’s concerning a stand-in for productions which are swallowed by unlimited visual capacity. Blame the computer and the over reliance on its unlimited special effects. The movie is sold on the marine mammal first over the human players.

Heart of the Sea does fare better than most. Chris Leavitt’s script finds a number of characters worth rooting for, even if they whittle as they go through predictable cliches. Chris Hemsworth’s Owen Chase is the people’s leader – a second-in-command son of a poor farmer. Benjamin Walker’s silver spooned George Pollard exudes recklessness and feels invincible because of a wealthy legacy. Certainly, Heart of the Sea pulls at current feelings of wealth inequality, despite the setting being 200 years prior. A dichotomy of hero and villain is set before a word is spoken.

Further, there’s an essence of man versus nature for the necessity of the industrial revolution. Visuals speak of cruelty for the sake of profit, a fine, relevant topic if only scraped on its surface. 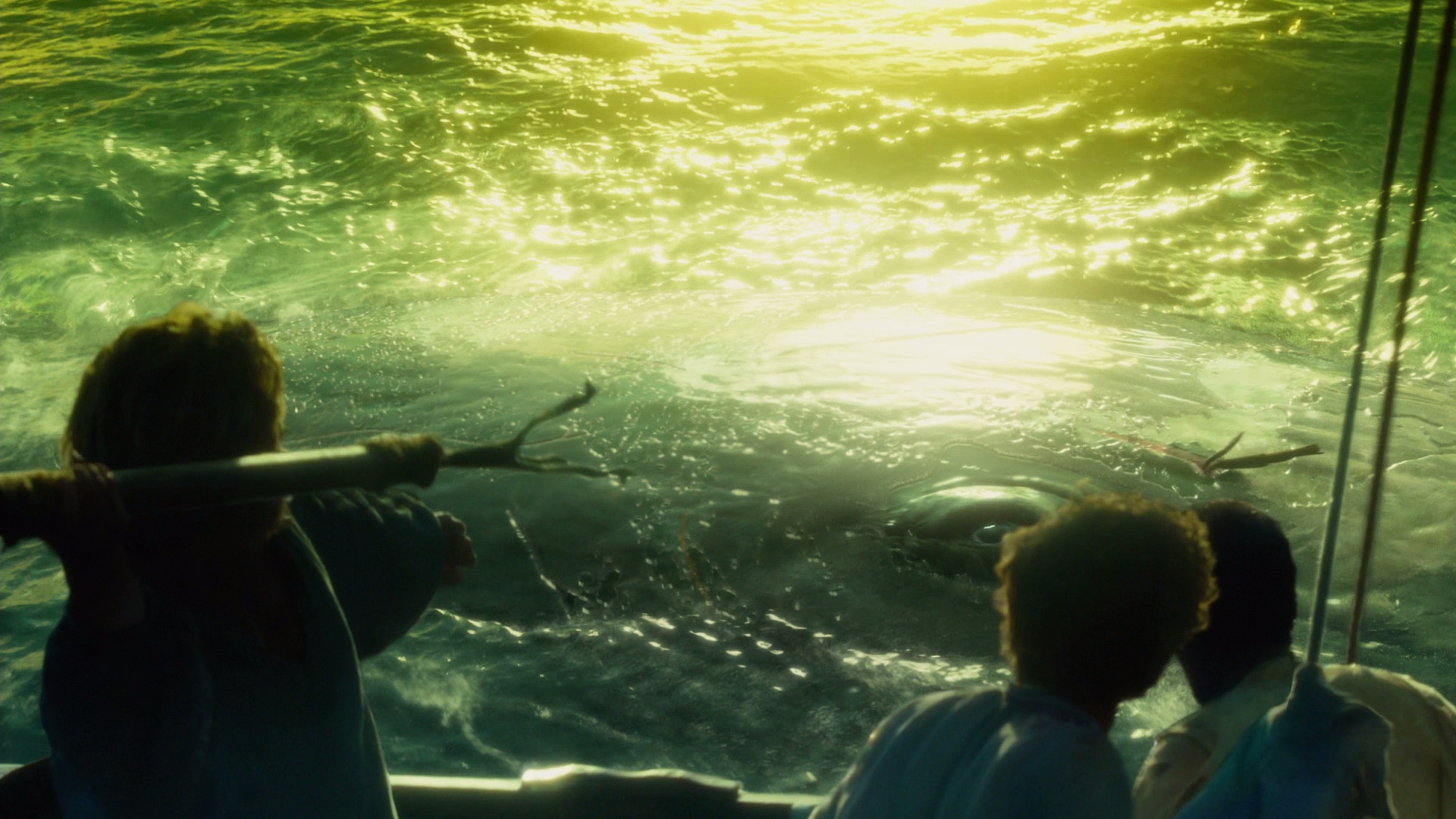 Get ready: Warner’s encode struggles to break 20Mbps. When that happens, it’s dangerous. Heart of the Sea is not easy material. Post production work adds steamy atmosphere. Water splashes frequently on the lens to further impact clarity, by design. This one needs the best encode possible. That is not provided.

Underwater opening shots are smeary. Noise trails as the camera turns. Banding is evident as the images fades out. Into the city, medium shots suffer. Faces are glossy. Beards have a glassy look. It’s easy to be fooled – close-ups excel. Facial definition, despite a slightly plastic appearance, is excellent. This will carry into the action scenes, although bitrates jump when the whale begins an attack. They drop again when things slow.

Sunlight peers down on most shots. Contrast can be hefty, if bowed by a gaudy color scheme which leaves most of the feature appearing jaundiced. It’s ugly. The yellow/teal clash is never attractive. Can’t blame Warner for that one though. But, black crush could be on their end, spotty as it can be. Shadows are often oppressive, letting up as daylight naturally takes over.

In the Heart of the Sea’s images remain striking, encoding gaffes or not. Shots of seas with the camera extending into the horizon are breathtaking. Fidelity of the water and lack of visible artifacting with this much motion (and debris) is impressive. Seeing the whale’s enormity would still elicit awe even on DVD.

Those looking for a premiere disc though are left out. There are too many hiccups. Ignore the numbers – they rarely indicate anything – but in Warner’s case, there has been a consistency in their inconsistency for the life of this format. Heart of the Sea is borderline.

Some stellar 3D is here for the taking though. During the attack scenes, 3D intensity soars are the images dive underwater. The sense of space under the ocean can be twice what it is above. Heart of the Sea’s 3D presentation gives the cinematography a new face too, giving depth to what appear to be awkward or unusual POVs.

Sch a strong application of the format needs consideration at the source. Scenery becomes flushed with foreground, adding immediate momentum for the fall in effects. No one is chucking harpoons at the camera, yet Heart of the Sea still captures its sense of space. Things dwindle when indoors. Interviews, despite boasting no cross talk despite the darkness, feel squished. Many of the long views of the ocean lack impact too. Minor quibbles in a sensational display of 3D’s ability.

While not nominated for any sound design awards in 2015, that’s a miss. More so than the visual end, audio encompasses the space of a whaling ship. While sound widely spreads in the city beforehand, once confined to the boat, sound creates a sense of being trapped. Wood groans, water splashes, ropes give. This happens all around and will be ceaseless. Few live action features better utilize the stereo channels with such accuracy and prominence. Placement is audibly pronounced without feeling disconnected.

Action pushes wind, rain, waves, and the thuds of a whale smashing into the underside with force. LFE support never feels absent. While not reaching the bombastic lows of some other discs, the apparent weight still addresses the mass and scale being depicted. It’s satisfying in capturing the power.

Side note: This is probably a Dolby Atmos showcase, but we’re only equipped for TrueHD 7.1.

Despite a failed box office run, Warner still pushes a number of bonuses onto the disc. Ron Howard: Captain’s Log collects the brief director’s diary into a 16-minute clip show. Most are short but still capture some behind-the-scenes insight. Dipping into the real story, Chase and Pollard looks at the strained relationship between the two leads, followed with The Hard Life of a Whaler. There sits discussion of the economy of the period, the job, and the location.

Melville is profiled in Whale Tale, looking at the novel from the inception to the author’s discovery of the source material. Connecting the Heart of the Sea delves into visual effects which were, at times, quite seamless. Sixteen deleted scenes break the 30-minute mark, and four additional extended scenes make it to seven minutes. The final piece is a half hour look at the discovery of a ship wreck on a reef, an excellent half hour documentary with connections to Moby Dick.