Steve Jobs releasing so near the Ashton Kutcher-starring Jobs is a Steve Jobs thing – confident, arrogant, and knowing the competition will fail. Whether the market wanted another Jobs movie doesn’t matter. Besides, this movie delivers a better character.

Although compartmentalized and fictionalized in framing, the narrative devices work. Jobs’ career, personal life, and social distance circulate around his technology – backstage at three critical product keynotes which defined the Apple creator. Steve Jobs is hardly flattering. Walter Isaccson’s book, the source material for the biopic, wasn’t either.

Jobs may have been difficult to know and difficult to like; Steve Jobs is determined to find a level of understanding for why. With 14 years of time to process, focus drifts away from the products. They’re stepping stones. Relationships are key. Steve Wozniak (Seth Rogen), his daughter, John Sculley (Jeff Daniels), and Joanna Hoffman (Kate Winslet, nearly unrecognizable from the outset); they’re center to Jobs’ life, challenging and confronting his lopsided decisions, which were often drowning in ego.

A powerful emotional center and even a sense of panic gives the film an Aaron Sorkin touch. It’s a compelling work. Fassbender excels at portraying the corporate figurehead, too. Alwin H. Kuchler’s cinematography does fascinating things with light, bending and toying with focus to keep Steve Jobs’ static interiors visually prominent. They match the class Jobs exuded on stage.

Those hurt in his pursuit are acceptable casualties.

Were this movie made during Jobs’ lifetime, under his watch, it would have been endlessly micromanaged and ferocious in perfectionism. Maybe a touch dishonest, as well. That’s the Jobs presented here, sure and focused, unwilling to let details go. Those hurt in his pursuit are acceptable casualties. His gift was tech, not empathy.

Maybe Steve Jobs is too small. Yet, that shrunken scale is the ambition, recreating an entire person – personality and their persona intact – in three sharply divided acts. The film is surrounded by accomplishments but led along by backstage clashes. Doors and curtains are shining metaphors. Deleted is Jobs’ public face, the smiling, giddy man who pulled off the cover to signal an era of tech he deemed his own. Everyone saw that Jobs. The marketer isn’t interesting. The mind is.

The necessity of a second Steve Jobs biopic is dubious. This will serve as the definitive screen adaption unless a studio turns curious to revisit in 50 years. Maybe the fall of Apple will push such a project forward. Such a collapse is inevitable. Few people exist who can erase their emotions to such a degree in order to create. Jobs was likely the only one. 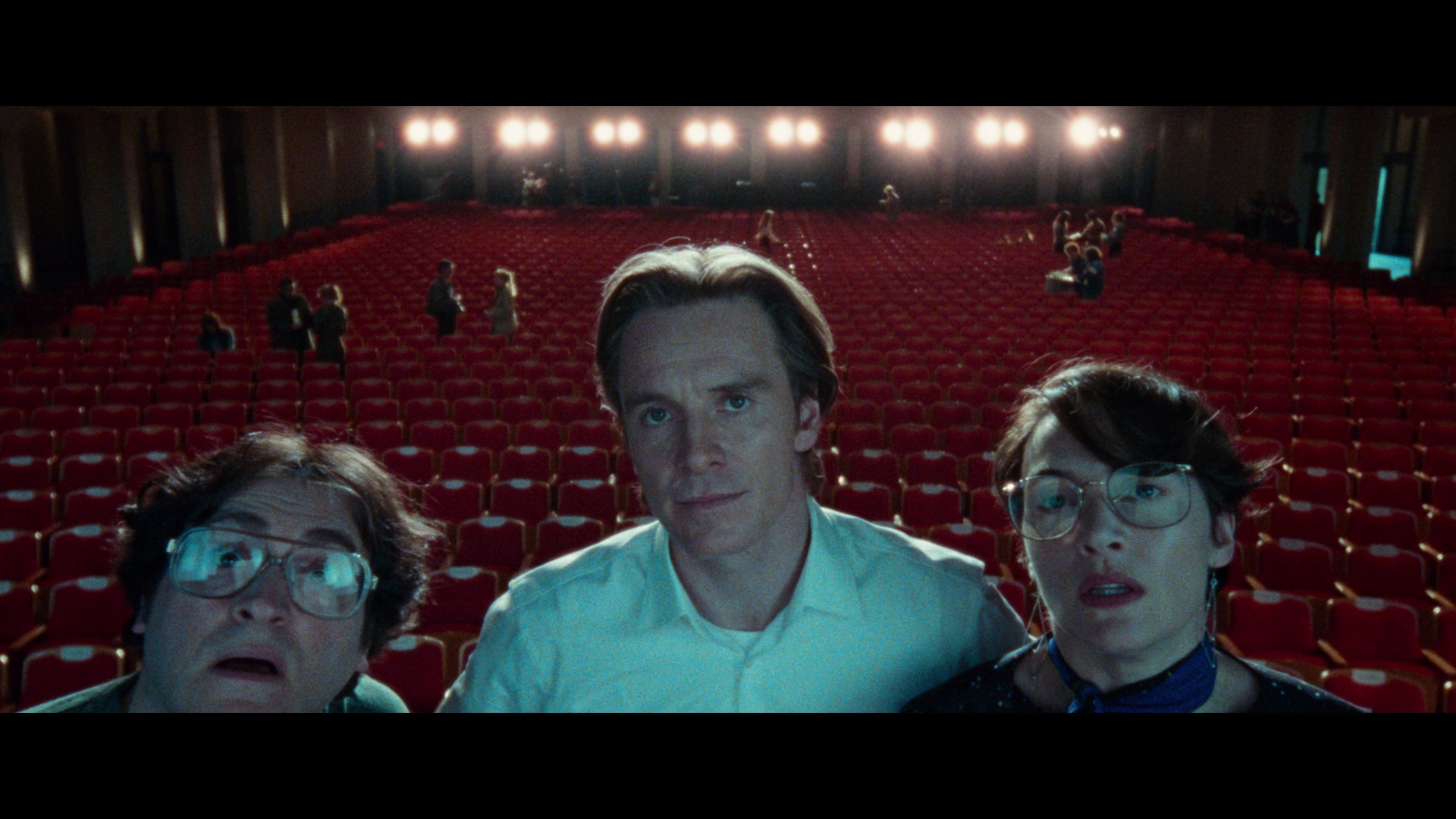 A trio of time periods are presented on different media. Steve Jobs opens with dingy, even lightly damaged 16mm film. From there, a transition into 35mm occurs, finally closing on a mixture of digital from the Alexa and Red series. Each is distinctive.

No single concern or issue carries through the entirety. Black crush prominent in 16mm will dissipate an hour before the digital era. Color timing skews warm in the beginning, glazed with a tint toward dim yellow, eventually pushing toward high contrast blues. The in-between chapter stands as the most natural, if still displayed with a bit of a chill.

This Universal encode appears ready to be challenged. 16mm is devious for the thick grain structure. Compression parameters cover well at over 30Mbps, a touch noisy is within acceptable levels. The light grain of the 35mm chapter barely causes a digital mark and the final is noise free. A dash of black crush will reenter the 35mm section, but quickly dissipates.

The disc does well to manage each look. It’s easy to distinguish the push into the digital era, glazing shots with a slightly artificial appearance.

Outside of crowds and anticipation bubbling over inside the various auditoriums, audio is quite calm. Those moments certainly build to a high. People stomp their feet which requires the help of the subwoofer. Clapping surrounds in all channels in the 5.1 offering. Even when away from the stage, sound echoes through the halls.

Some media coverage will perform a swirl effect in transition between chapters. It’s the only audio trick on display. A muted soundtrack is suitably low. Steve Jobs is only marginally interested in the sonic space, but does well with what it has.

Two commentaries are offered, one from director Danny Boyle, the other with writer Alan Sorkin and editor Elliot Graham. Both are excellent tracks, Sorkin arguably more so. Another highlight – the last one, actually – is Inside Jobs. While stuffed with too many clips from the films, the classiness which shows through this 44 minute, three part feature creates a feature as captivating as the film itself. The disc doesn’t need anything else to tell the film’s story.