For a brief, glorious time in the 1980s, ninjas were a hot fad in popular culture. From television to Cannon Group’s revered series of ninja films such as Enter The Ninja, the subject took America by storm in no small part to Japanese actor Sho Kosugi.

The martial arts legend starred in Enter The Ninja and Revenge of the Ninja, paving the way for a series of two ninja films with director Gordon Hessler (The Golden Voyage of Sinbad). Pray For Death was the first film for Sho Kosugi teaming with Hessler. The ninja action epic boasts a diabolical villain and seriously cool fight choreography for its time. It is an essential entry in the canon of great ninja films, made most entertaining by Kosugi’s convincing stunts.

Pray For Death is the simple tale of a man taking retribution when his innocent family members are wrongly crossed by dangerous criminals. When the police can’t help his family, Akira Saito (Sho Kosugi) takes matters into his own hands and metes out justice. Akira and his wife Aiko live as a traditional Japanese family with their two young sons. Aiko, the daughter of an American, cajoles Akira in moving the family to America for a better life. They plan to start a Japanese restaurant in America and live out the American Dream.

Little does the family know the run-down property they have purchased houses jewels stashed there by corrupt cops. When the jewels turn up missing, the local gang starts turning up the heat on Akira’s poor family. The primary villain is a cold-blooded maniac named Limehouse (James Booth). What he lacks in apparent physicality, Limehouse makes up for it with sheer villainy. What no one knows, including his own family, is that Akira is a ninja in secret. The ruthless criminals soon discover that Akira is capable of defending his family’s lives. After a couple of brutal plot twists, it all ends in a spectacular showdown.

Why Sho Kosugi’s movies worked is that he was utterly convincing as a ninja. A martial arts legend that had won hundreds of karate tournaments in the Seventies, he worked his way up from extra to B-movie star due to his impressive physical skills and excellent stunt choreography. All of those skills are on display in Pray For Death. The slick ninja action set in the streets of America makes for an interesting juxtaposition. Pray For Death also has a surprisingly great villain in Limehouse, made even more vicious in the included unrated cut.

Another tidbit worth pointing out is that Shredder, the main villain for the Teenage Mutant Ninja Turtles, looks suspiciously similar in appearance to Akira dressed up in full ninja garb. Methinks their creators Eastman and Laird had definitely seen Pray For Death when designing Shredder’s original appearance.

If ninjas bore you, I don’t think Pray For Death will change your mind. Fans however will lap up the tight story and action seen in Pray For Death. This is one of those hallowed B-movies from the Eighties that action fans should check out. Anyone into the wonderful genre movies made by Cannon Films should feel right at home. 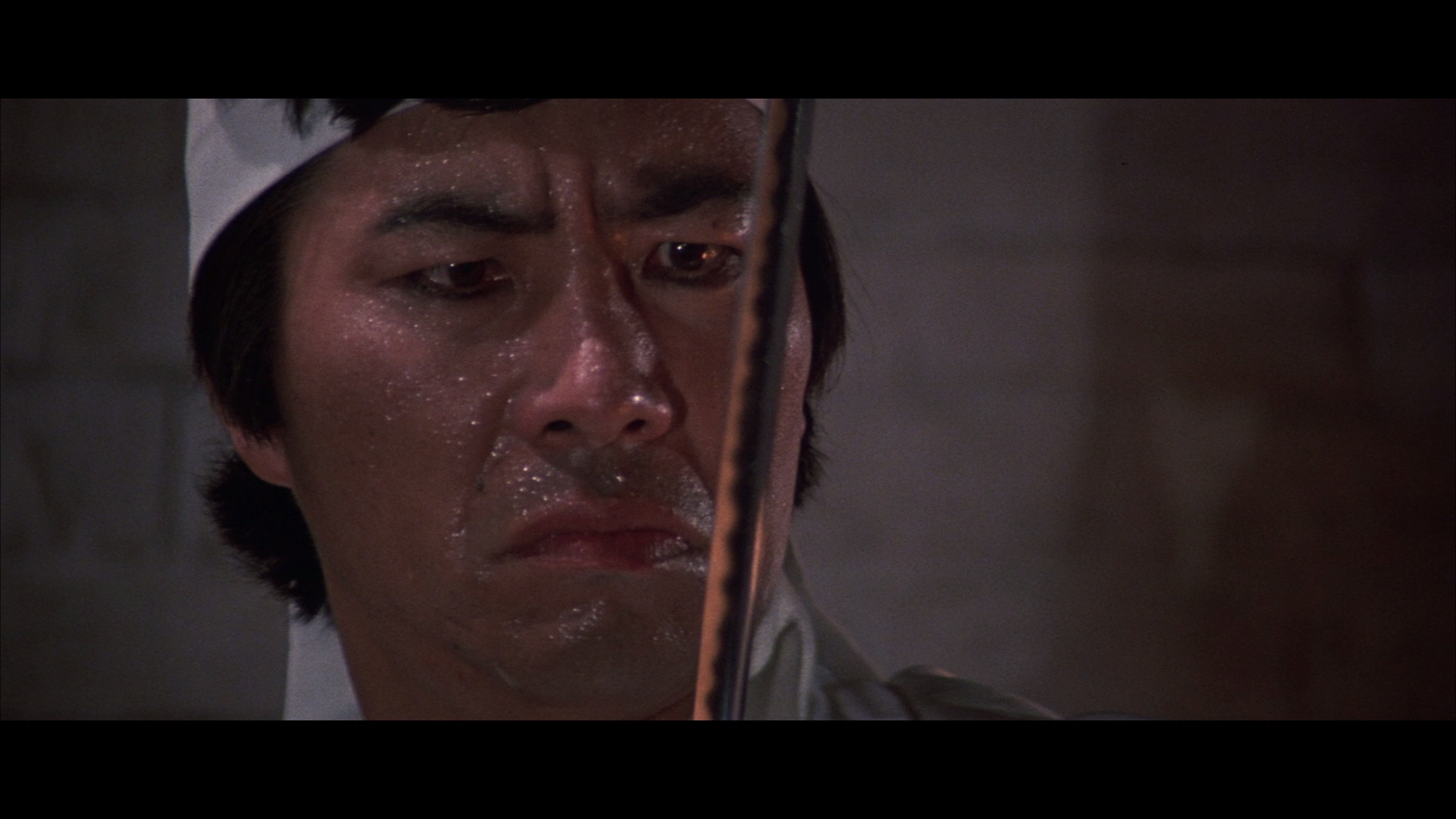 Fans will be very happy to learn this Arrow Video release contains the “unrated” cut of the film with four more minutes of excised footage. The shorter R-rated cut is also included but I strongly recommend viewing the unrated cut. It features much more explicit violence and one fairly shocking scene that makes Limehouse a more visceral opponent for Akira.

The unrated footage was found included in a French print, enabling it to be reinserted into the film’s main presentation. The video presentation does suffer a bit in image quality for the four extra minutes, introducing a noticeable difference in black levels and contrast from the far better looking high-definition transfer of the original R-rated version from the negative.

Arrow Video licensed Pray For Death from MGM, using their original HD transfer from the movie’s negative. Pray For Death’s cinematography isn’t razor-sharp and scenes strangely waver in focus at times. This is a film-like transfer with nice black levels and steady contrast that reproduces the movie as it was originally intended in its 2.35:1 aspect ratio. The genre film boasts appreciable depth and definition, showcasing the relatively clean film elements. A wisp of sharpening is evident in a few select scenes.

Despite using a BD-50, a hint of chroma noise and banding pops up when Akira is training in Japan. That is unusual for an Arrow Video release, though it does include two full cuts of the film. All in all this is a satisfactory presentation of a film that looks a little on the softer side. Arrow Video’s new release still represents a major improvement on Blu-ray over prior home video versions.

Recorded and mixed in Dolby Stereo, the original 2.0 PCM soundtrack is a fine older audio experience. Aside from a couple of cheesy musical moments, including the dreaded training montage, this is balanced audio featuring intelligible dialogue. There is a nice sense of space in the mix with a fairly big soundstage. The B-movie includes decent explosions and crashes, providing some kick in the action scenes.

Optional English SDH subtitles are included in a white font. They remain inside the scope framing at all times. A tiny bit of Japanese dialogue found at the beginning of the movie is left untranslated for English speakers. The story is perfectly understandable without the translation but including it would have been a nice touch. It’s not important dialogue, anyway.

Arrow video digs up a rare archival interview from the movie’s premiere and holds a new 2015 interview with star Sho Kosugi. While not as loaded as some Arrow releases, this is a fun, entertaining set of special features for ninja fans.

Sho and Tell Part 1: Birth of a Ninja (19:05 in HD) – A brand new interview with star Sho Kosugi. He recalls his early life in Japan as a failed baseball player and his move to America. Fondly recalling his days as a black belt in karate and winning tournaments, he found inspiration from the success of Bruce Lee in Hollywood. This is an informative piece about his early career and film roles, spoken in English.

Sho Kosugi and Martial Arts Forms (18:56 in SD) – Archival television interview and Ninjutsu demonstration with Kosugi from the film’s New York premiere. A cool piece for nostalgia as Kosugi is interviewed about his views on karate.