All the President’s Men may retain the championship for story-of-a-story newsroom movies but Spotlight is within contention for that title.

Spotlight layers itself – a film about corruption in the Catholic Church in addition to a film about the newspaper pinch as the internet dawned. There is a wide ranging character story, swollen with sheepish Church officials, their defenders, those covering truth, as well as the reporters picking at buried facts. Freedom of the press, first amendment concerns, societal impact; ramifications are countless.

Journalism films bend and bow to drama. It’s disconcerting to know facts are warped, even ironic in the circumstances. Spotlight’s treatment remains smart though, steadfast on its journey to envelop numerous key players – some unseen – through dialog. Little of Spotlight is deliberate. Facts, people, places; those unravel as they’re found. The uncovering of critical information appropriately lacks thematic wow factor, lessening theatricality and posturing.

Spotlight has expository lines – reiterating facts and placing people within timelines – yet this is a film which is designed to lure an audience into the job. Boston Globe’s specialized investigative team holds only four reporters. Perspective becomes fly-on-the-wall or over-the-shoulder. The camera stares at past stories and clippings, expecting viewers to source the reason. Narrative guidance is limited or invisible.

But a few of the accused priests are given parts, refusing to glorify their crimes or allow defense of the indefensible.

Coming from director Tom McCarthy who only one year ago dabbled in mediocrity with Adam Sandler’s The Cobbler, he enacts a full turn-around. Writer Josh Singer is unexpected too, coming from the haughty Wikileaks drama, Fifth Estate. Together they find a reasonable medium – without the missed potential of Cobbler and deleting the hefty dramatization of Fifth Estate.

There’s relief in seeing one of these stories adapted without bricks through windows or threatening gestures. Most in the genre use fear to endow their key players with reason to fight. Spotlight’s reporters have the will to do so from the outset, no agitation needed. Performances draft the necessary personality traits – Mike Rezendes (Mark Ruffalo) pushy and short-tempered, Sacha Pfeiffer (Rachel McAdams) a keen-eyed fact gatherer. Michael Keaton’s Robby Robinson carries the experienced presence of a career decades long in the business.

Appreciably giving time to victims rather than perpetrators, Spotlight’s determined to express the side of those impacted. But a few of the accused priests are given parts (not that many would take such a role) refusing to glorify their crimes or allow defense of the indefensible. Therein is another layer, the psychological. A Globe source pins the action on restrictive Church policies concerning celibacy, a lead-in to a bizarre, unnerving, and creepy confrontation with one of the rapists. His oblivious reaction is all the reason needed to ignore the abusers. Spotlight shines only on those who deserve credit – those willing to expose the reality. 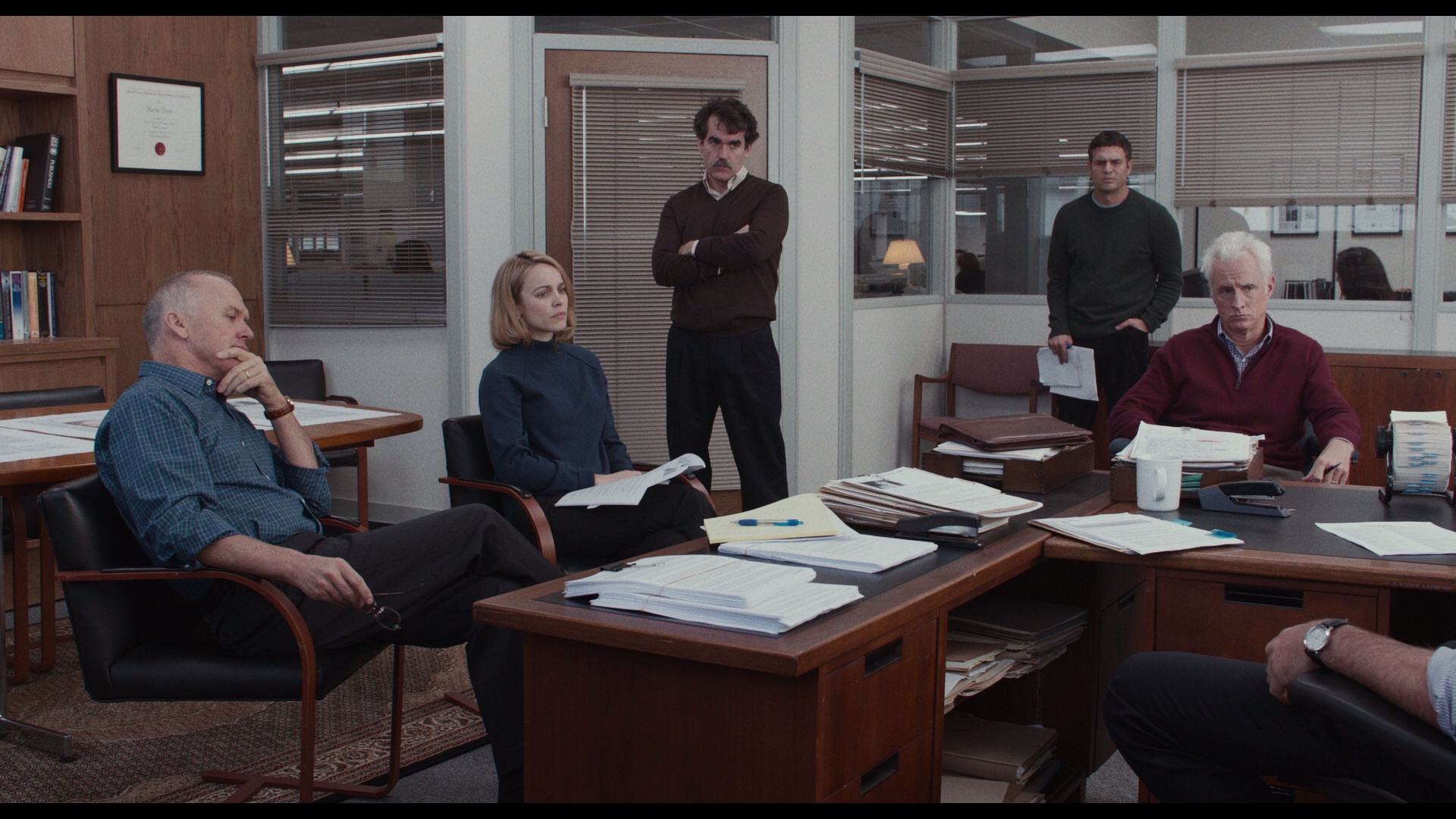 It could be a surprise to learn Spotlight was shot digitally. There is an artificial grain texture overlaid on the images. The first curious giveaway this is digital comes early – a tightly striped shirt at 3:19 strobes and smears with motion. Smearing becomes an occasional problem throughout, if inconsistent. Universal’s encode (despite soaring bitrates) doesn’t capably handle the congestion of noise.

Impacted with depth-lessening hues, the large amount of blues which cover the image are ceaseless. Boston – or Toronto, mostly – has a persistent winter chill. While Spotlight conveys a changing of seasons with subtle exterior cues, nothing feels like summer.

This means black levels are pushed away, situated into darker grays. Relaxed image density takes some of the frame’s impact during key third act scenes. Shadows still lose a dab of fine detail too. An outdoor, night conversation between McAdams and Ruffalo is the film’s key representation of the problem.

Thankfully, resolution saves the disc. Facial definition floods the screen. Exteriors are presented at peak sharpness, as are some of the best shots of Boston on video. Behind the sketchy grain lies images with all of the perks of modern digital cinematography. Encoding issues won’t blot out the best qualities.

Dialog initially sounds coarse within the space of this DTS-HD track. It’s an unusual problem for a new release, one which disappears quickly afterward. It’s all centered too. Nothing slips away and into the stereos.

Audio follows the form of a fine drama. Ambiance is plentiful and a scene at a Red Sox game soars. Parties and restaurant scenes are lively. Even street level can be active with passing cars panning through the soundfield. Nothing incredible, but precise and active.

Extras are a letdown. Only one bonus is of consequence: Uncovering the Truth which spends a meager six minutes with the real journalists as their discuss their work. A Look Inside and The State of Journalism are pitiful EPKs and only a few minutes each.