Mostly shaken, not so stirred

Between ecstatic action scenes and glamorous long takes, Spectre isn’t willing to fill in the remaining space. Whittled down from the narrative intellectualism of Casino Royale (and eroding through two sequels), Spectre is certainly enthused with itself.

Daniel Craig has grown publicly exhausted as Bond. Spectre thus knocks on a doorway to self-awareness – what can Bond do that a drone can’t? It appears the series is fighting internally for its existence rather than letting Bond battle for the free world. Obsolescence is insinuated. Then come the explosions. Boats, helicopters, cars, planes; everything goes boom. You’re not supposed to notice the blanks spaces everywhere else.

Bond’s millennium tales have started reacting. Although bound to Royale and Craig’s other intermediary stints as the spy, Spectre rushes into an eerie political saga, concerning itself with the surveillance, terrorism, and information war which sprung up between films. Such deliberate script work means M (Ralph Fiennes) speaks for the audience, curtailing the impact with his short monologues.

Spectre’s lingering memories will lie purely with its grandiosity as opposed to its sophistry.

Christoph Waltz is nigh wasted as the film’s villainous center despite a delectable layer of sociopathic behavior when he’s around. Bond becomes entangled with a saga of wires, cameras, and wi-fi rather than a super villain. Nothing is twisty-turny. Waltz’s reveal struggles with a superficial reveal, a four-film tie-in which is written for convenient shock.

Letting go by the climax, the absurd-even-for-Bond finale constructs a ludicrous, hurried scenario which is hardly worth the extended wait – doubly so when considering what has come before. Spectre’s talky side fails because it’s rudimentary. All of the location shoots through Morocco, Tunisia, Austria, London, and others cannot cover what Spectre fails to do. Bond travels to uncover a plot lacking in the capacity to surprise.

Story beats puddle on the surface from the outset. Characters are already where they need to be for the requirements of their roles. There’s no narrative motion despite the fluidity common of the spy genre (more so for Bond). Gorgeously photographed and scored, but ultimately ailing. 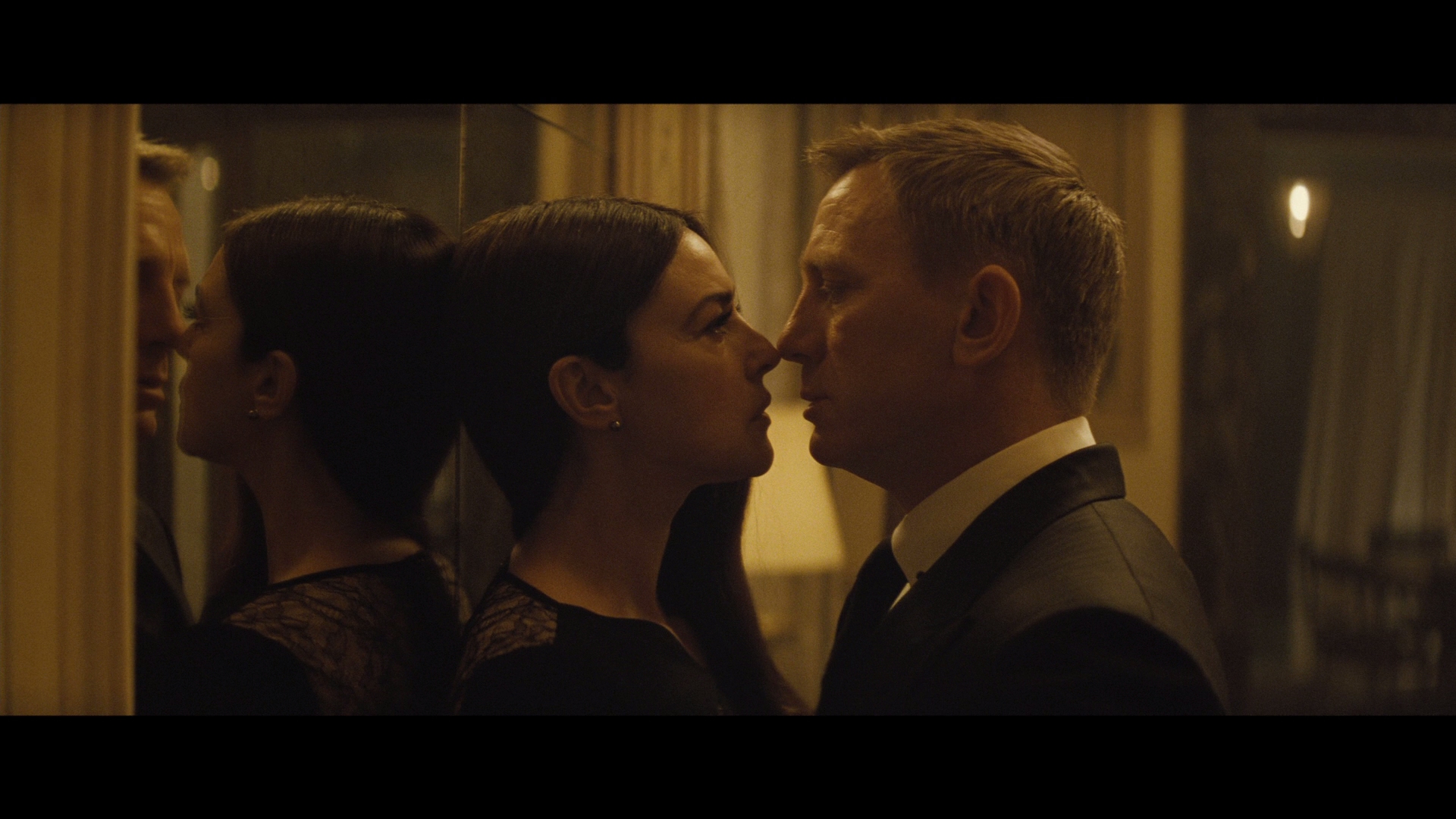 After jumping to digital for Skyfall, the world of Bond returns to film for the follow-up, the Blu-ray offering a generous replication of the 35mm stock. Encoding carriers a stellar bitrate, clearly maintaining grain for the full runtime. Clarity is exceptional.

Spectre is brushed with sepia tones from its digital intermediate phase. Save for some colder weather situations, nearly the entire film carries warmth. The choice leans Spectre toward a classy, vintage aesthetic, disallowing any bold primaries.

That color grading will impact image depth, causing black levels to dwindle. They look as if pulled from a high-end booze commercial. The brown-ish hue distracts. A lack of density fails the feature visually, if by design. Things do shift for Spectre, gaining ground in the back half as night is cast over London. Richness is instantly added. Shadowy cinematography finally has a companion.

No matter the issues, Spectre proves superb in fidelity. Sharpness reaches an expected level for a film rumored to cross $300 million in budget costs. Close-ups dazzle with high frequency detail. Aerial views of the various locations are all stunning. Day or night never matters; London appears as pristine as Austria, just as the opening festival shots of Morocco resolve thousands of people.

Although Bond is a purveyor of the finest, Spectre did not offer a Dolby Atmos mix theatrically, so instead the disc is situated with a fine DTS-HD 7.1 track. It’s brilliant and the format is irrelevant. Sound travels flawlessly between channels, best heard as a helicopter rotor swirls between channels in the opening act. Such an effect has rarely been so dizzying. This comes after some tremendous drum beats, sonically large crowds, and ambient music which tracks into the proper channels.

No loss is noted as Spectre displays awe-inspiring explosions and picks up the nuances of chase scenes. For an example of sound design, the train fight begins with quite ambiance of the track, rising in intensity as the brawl progresses. Then, the score takes over. The work is sensational.

Boo to the limp bonuses which come in under a half hour total. For a movie of this scale, that’s a poor performance. The only piece of length is Bond’s Biggest Opening Sequence, some 20 minutes, much of it promotional, on how the lengthy set-piece was done. Six video blogs are barely adequate and thankfully offer a play all function, a feature which has been disappearing in recent years. A stills gallery and trailers are it after that.

Hilariously, MGM has issued Spectre in a rental only edition sans extras, as if these bonuses are worth the upcharge.