Director Pascal Laugier caused waves in the horror community back in 2008 with his brutal French-Canadian horror film Martyrs. Widely considered a bleak cult classic by fans, the Goetz brothers (Kevin and Michael) have fashioned an American remake for a wider English-speaking audience.

Tackling an underground horror classic with Pretty Little Liars star Troian Bellisario in the remake has angered some of the original Martyr’s passionate fans. The Goetz brothers promised to retain Martyrs’ uncompromising vision and brutality in their remake. This is not the raw, nihilistic experience seen in the original movie. Their Martyrs is an entertaining horror movie in its own right, introducing the concept for a more mainstream audience.

While it doesn’t contain the power or intensity of the original, Martyrs is a streamlined remake of the original’s basic plot and characters with a capable cast. Led by actresses Bellisario and Bailey Noble as the two young women at the center of everything, the harrowing journey their characters go through is told in exacting style. Their characters will face an ordeal that challenges our notions of suffering and martyrdom.

This is a film about pain and suffering in almost religious terms, a violent, bleak, dehumanizing narrative. The less one knows about Martyrs before seeing it, the better. Ten-year-old Lucie escapes being held prisoner in a warehouse, only to end up in an orphanage. There Lucie meets Anna, who will soon become her closest friend in the world. Lucie claims she was mentally and physically tortured in captivity. The police had found nothing but an abandoned warehouse. Lucie suffers from waking nightmares and horrific visions due to the mental trauma. She’s grown up to become an unhinged young woman.

This American remake tones that down to a degree, while keeping the original narrative’s fluid unpredictability.

Over ten years later, the now adult Lucie (Troian Bellisario) claims to have found the people that tortured her as a child. Soon her old friend Anna (Bailey Noble) will get involved and nothing will ever be the same for the two of them ever again. If this doesn’t sound like much of a horror masterpiece yet, I am purposely playing my cards close to the vest. Martyrs is one of those films you should see without preconceptions or foreknowledge. If you have seen the original, this remake retains most of the basic plot.

The original was a starkly made film without compromises. It wasn’t for everyone with its graphic torture and sickening levels of violence. This American remake tones that down to a degree, while keeping the original narrative’s fluid unpredictability. The best horror movies continue to subvert the audience’s expectations until the end. Martyrs does that with precision as we discover more and more about Lucie’s tragic life.

Newcomers will likely be more receptive to this American remake of Martyrs, especially mainstream audiences. It is hard not to compare this softer, less arty version of the same basic plot with the harder, original cult classic. Troian Bellisario probably wouldn’t have been my first choice for this role but she acquits herself nicely as Lucie. 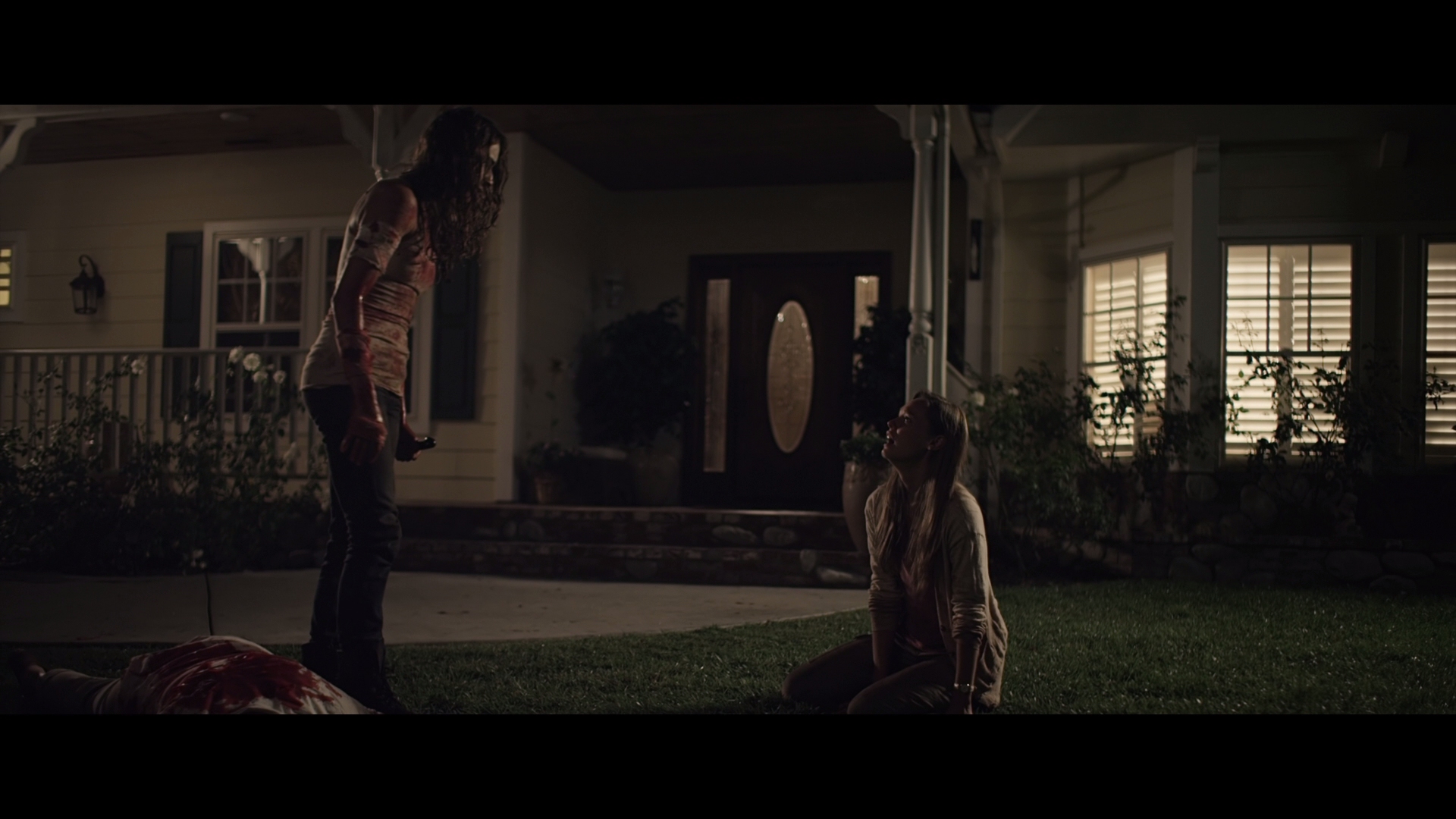 Martyrs is a cleanly shot digital production with sharp definition and pristine clarity. The desaturated palette heavy with amber hues has been seen before in other dark thrillers. Starz/Anchor Bay provides a perfect Blu-ray presentation for the new movie directly from the fine digital intermediate, exactly as intended by the filmmakers.

The 86-minute averages a sound 26.96 Mbps for its AVC video encode. Anchor Bay has had compression problems before but Martyrs features a professional, high-quality encode. The 2.40:1 cinematography is stylishly shot and razor-sharp outside of a few FX shots. The consistent contrast and inky black levels make Martyrs a fairly striking demo most of the time.

The transfer is completely unfiltered with excellent high-frequency content. The video screams depth and dimensionality in many scenes. This is one of the better looking horror movies found on Blu-ray.

Martyr’s 5.1 Dolby TrueHD soundtrack is a discrete surround mix with impressive separation. Pinpoint dialogue is nicely balanced in audio that ranges from dynamic and aggressive to whisper quiet. A subtle score and well-done Foley effects combine for a moody sonic experience that envelops the listener. Judicious LFE and aggressive surround cues also play a role in this total audio presentation.

Optional English SDH and Spanish subtitles display in a white font. They appear outside the 2.40:1 aspect ratio.

I was surprised Starz/Anchor Bay didn’t bother with a slipcover.

Martyrs: First Look (08:22 in HD) – This featurette interviews the cast and crew, including its stars and the directors, in a broad overview of the movie. Some of it is bizarrely wasted in a brief plot recap with clips taken from the movie itself. A little behind-the-scenes and on-set footage is included. This is a decent but forgettable piece of fluff, essentially something found usually in EPK material.

I Spit On Your Grave III: Vengeance Is Mine Trailer (01:03 in HD) – This trailer plays before the main menu.

Click on the images below for full resolution screen captures taken directly from the Blu-ray. Images have not been manipulated in any way during the process.