Director Paul Hyett gives us a simple tale of survival in Howl as werewolves attack a downed passenger train coming from London. Can the disparate group of strangers trapped together survive the night against these ferocious beasts? The escapist genre movie doesn’t feature well-known stars or a huge budget, though Hyett’s experience as a prosthetic designer serves him well bringing the werewolves to life on the big screen. Howl moves predictably but provides enough monster thrills to overcome its mostly forgettable characters.

The everyman protagonist of Howl is sheepish Joe (Ed Speleers), a ticket taker stuck doing overnight duty on the train. He’s been passed over for a job promotion and has just been rejected by his cute co-worker, Ellen (Holly Weston). On the sleepy train are your standard “random” grouping of passengers, from an elderly couple to a self-absorbed teenager. Joe, Ellen, and the passengers will soon be in a fight for their lives, trapped inside the passenger train when it breaks down. Stuck in a dark forest without power and conveniently lacking communication with the outside world, a bloodthirsty group of werewolves soon descends on the train.

Howl doesn’t break new ground depicting werewolves but has a firm grasp using them as genre villains. It quickly moves from a tense thriller to an all-out race for survival once it becomes apparent these passengers are in severe danger from the monsters. The script tries to flesh out the passengers as best it can but Joe receives the bulk of its character development. He’s fairly bland as the hero. More care could have been paid to develop his less-than-dynamic personality. The narrative strangely avoids giving him anything clever to do in helping the passengers.

The passengers themselves are largely trite stereotypes or one-note jokes, from single mother to cheating businessman. That isn’t necessarily a bad thing but it’s hard to feel much sympathy for them when they start getting killed off.

Speaking in a broader sense about werewolves as genre fodder, comparatively fewer movies about them exist than other horror staples such as ghosts or vampires. When you make a werewolf movie, the cost of making an effective looking creature precludes taking the creative risks seen in other horror movies. Howl is no different, taking fewer risks with its story to deliver a satisfying horror movie if you want to see werewolves go crazy. It’s a pleasant diversion for horror fans but ultimately forgettable besides the effective creature FX.

Howl should do well with crowds looking for a heaping of monstrous werewolf action. The action is convincing and its special effects look nice, which is more than can be said for many other horror movies. 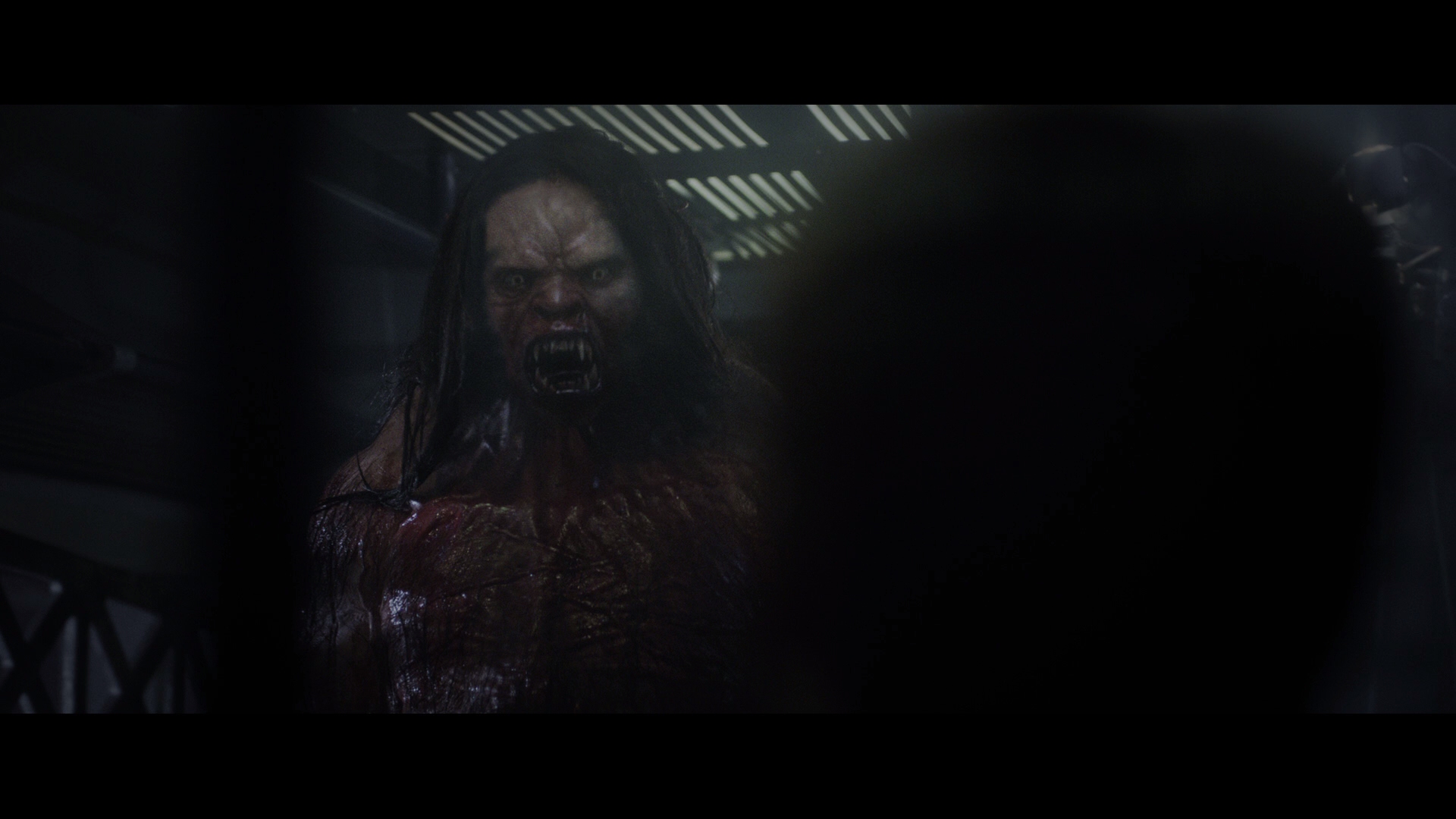 Alchemy provides a decent presentation of Howl, a 2015 British production made overseas in London. Howl has mostly sharp video with crisp definition, nicely shot in a moody manner as most of the action takes place inside a blackened-out passenger train during the night. This is an unfiltered transfer from the movie’s Digital Intermediate.

The 92-minute main feature is encoded in AVC on a BD-25. The video encode averages a rather low 18 Mbps, introducing some unnecessary banding into the 1080P video. The film is shown at its intended 2.40:1 scope aspect ratio.

Given the clean nature of this production’s video, a better encode would have greatly reduced the banding visible in darker shots. It is most prevalent when the train first loses power.

The sharp video does feature nice high-frequency content in close-ups. The palette errs on the desaturated side, though its contrast and black levels are both solid.

Howl’s 5.1 Dolby TrueHD soundtrack has to do a lot of heavy lifting in its storytelling. The werewolves are heard more than seen for much of its first hour. The discrete mix is strongly active for most of the film with exemplary channel separation and surround sound.

I did have a minor problem with the mix’s balance between dialogue and action. The soft dialogue is low in the mix, making it difficult in spots to fully hear everything being said as the werewolves rampage on the train. This is an immersive audio track with a strong low end and a cacophony of surround effects.

Optional English SDH and Spanish subtitles are included in a white font. They display within the scope aspect ratio at all times.

Alchemy includes a solid assortment of featurettes with interview clips from cast and crew. Behind-the-scenes footage and production information are shown in a swiftly moving style. Director Paul Hyett speaks in just about every featurette.

The Werewolves (06:10 in HD) – A featurette that details the creation of the VFX and prosthetics needed to bring the werewolves to life.

The Humans (06:18 in HD) – A breezy look at the characters with the cast themselves commenting on their own characters.

The Train (05:36 in HD) – A production featurette showing footage of the set for the train and how digital effects were used to fill everything out.

The Grade (04:08 in HD) – A look at Howl’s color palette by its colorist and how it was achieved.

Alchemy Trailers (05:30 in HD) – Trailers for Frankenstein, Lavalantula, and Charlie’s Farm precede the main menu and are also individually selectable from the main menu.

Click on the images below for full resolution screen captures taken directly from the Blu-ray. Images have not been manipulated in any way during the process.