Burned but not done cooking

Burnt drops the word “arrogance” with frequency. Turns out it’s an apt descriptor of Bradley Cooper’s Adam Jones, whom the film uses to tie itself together.

Burnt shrouds itself in themes, notably redemption. Most of its characters are battling their past, Jones more than others. Drugs, booze, women; he’s done it all after a disgraced turn as a two-star (not three) chef. He “deals in culinary orgasms,” translating into a relentless snobbery for food – “snobbery” a touch ironic for website designed to take down sub-par video and audio, admittedly.

Jones’ attitude and exterior turn Burnt into an impromptu Hell’s Kitchen, sans the foibles of reality TV. Jones screams and yells, going so far as to shatter things when food is deemed imperfect – even by a millimeter.

Cooper’s performance, portraying an imperfect man trying to surface from his past, is enough to push Burnt forward. The surge of adult material lends a layer of authenticity to the character. Separated from the food aspects, Burnt would still feel gaudy, shot on location in London in all-white kitchens and lavishing attention on colorful ancillary items. Adam Jones would find the piece overripe, yet likely delicious.

Separated from the food aspects, Burnt would still feel gaudy…

If food movies are the in thing, Burnt is situated a distance away from the affable Chef. They’re dealing in different food mediums, Chef the fatty, meat churning food cart, Burnt the $500 meals for those in luxury business suits. Yet the films are partially twins, pitting their leads against the restaurant industry and sloppy pasts, despite being labeled comedy and drama respectively.

The category differential comes from how vicious Burnt can be, portraying physical altercations and betrayals. As much as Burnt appears to lust after upscale, high dollar dining, the aspects of the food’s production are seemingly frowned upon. This breaks people, initially sending Jones into a stupor of addiction and oyster cleaning and later, his co-workers manage their own inner turbulence as a result. The root cause for their problems comes back to their culinary careers.

Burnt finds itself in a constant struggle of likability. Can Jones be such a bastard and still carry an audience through his journey? Burnt has the benefit of character complexity, a dribble of defensive sarcasm giving the character enough humanity away from food to believe in his growth process. A dash of elation concludes Burnt, not because of professional success or joy, rather the understanding of who Jones is and who Jones always wanted to be. He has to find himself and viewers will need to tolerate the character to see him through. 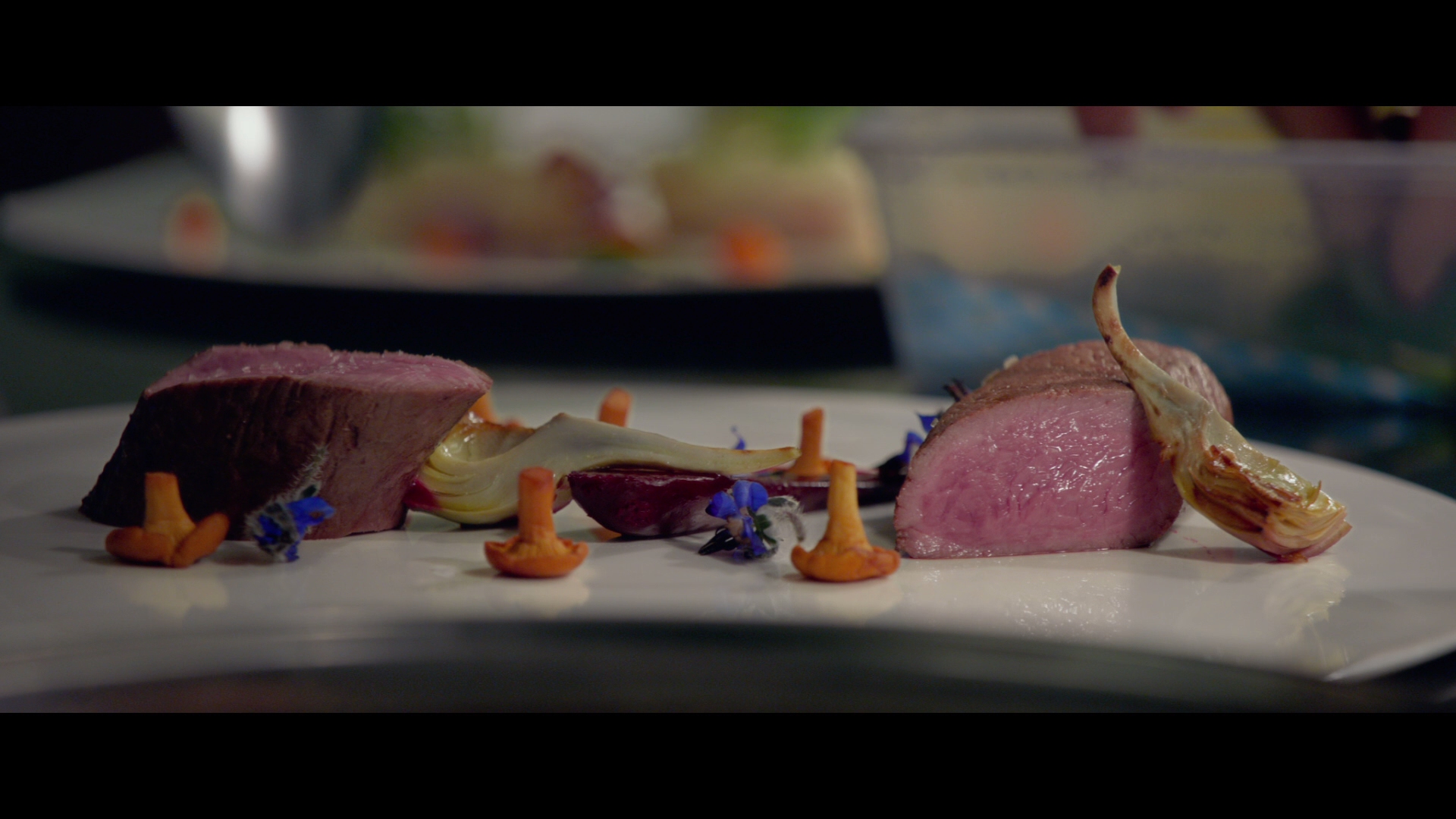 While offering a pleasing range of color – even if the material does descend into a series of scenes covered in light blues – Burnt is a bit of a visual struggle. Digital cinematography appears raw at certain avenues of the story, with astonishingly dull black levels and contrast. It’s as if little was done to the imagery once filmed. And thus begins the video snobbery.

Most of Burnt’s issues (if not all of them) will trace back to the flimsy depth afforded to the feature. Burnt looks artificial with a low grade sharpness and pale blacks. Scenes which need to render shadows, anywhere other than in exterior light, fall victim to an influx of blue. Noise seeps in and depth falls apart.

The food looks great though. Red meat and other touches are elevated significantly away from dramatic material. It’s as if those inset shots of the meals were done under a different cinematographer. Establishing shots have some zip too. London store fronts, trees, bricks; those all appear saturated. They even offer contrast.

Fidelity can be evident. A number of close-ups are strong. Food texture has some clarity. Most of the mid-range is soured by the film’s overall misty appearance, eschewing visible resolution for style.

DTS-HD mastering enjoys surrounding characters with their environments. Kitchens are heavy on activity, with clanging plates and sizzling food. There is a distinctive layered presence to many of the scenes, ensuring activity remains in the rears to add a sense of space. Hotel lobbies and splashing rain add ambiance to the mix.

Things are in balance, and Burnt is willing to spread dialog around now and then. The disc never feels anchored to the center or front soundstage. Music proves to be a capable presence in the low-end.

Commentating duties come from director John Wells and the chef consultant Marcus Wareing. Five deleted scenes continue the commentary but from Wells alone. In the Kitchen with Bradley Cooper is a more encompassing making-of then the name insinuates. At 24-minutes, this is also an excellent look at the production. Those who still need more can view a Q&A session from a Screen Actors Guild screening, also 24-minutes.