Mark Whatney is a tough one. He survives years on a desolate planet – alone – while using improvisation for survival. While the book was a tale of science intellectualism and adaptation, Ridley Scott’s film turns into a cast away tale. By doing so, Martian pulls the entire planet (Earth, not Mars) together for a singular goal, finding the good in people when things appear bleak. It’s optimistic, more so with Damon’s portrayal of the sarcastic yet infinitely likeable Whatney.

Read our full theatrical review of The Martian for more.

On Blu-ray, the movie mirrors the stream of digital images projected into theaters. Generally clean, Martian performs well. Fidelity is strong, close-ups are defined, and details on space suits are superb. Production design is stellar too, brought out in fill on Blu.

The copycat Blu-ray means there are scenes which appear tampered. They are likely caused by computer generated elements impacting the scenery. Most of this is left to the landscapes. Halos and sharpening are noticeable. Scenes using or simulating GoPros are likewise altered. Definition turns coarse and sharpness artificial. It’s the source, not the Blu, if no less disappointing.

Rarely is Martian a colorful feature. Mars swells with reddish oranges. On Earth, scenes are covered in blues. Flesh tones follow course. People appear dead on Earth given the hue. If they weren’t moving, they’d be primed for caskets. Any saturation is saved for planetary shots, notably when hovering over Earth.

Black levels are fine. Rarely are they challenged though. A few glimpses of Mars at night are suitable. Space is pure black. That’s appreciated. Contrast swaps between blown-out, intense, and softened, but holds enough to give the film dimensionality.

Scott shot The Martian in native 3D and it turns out space films are among the peak of this format. Gravity astounded – even made 3D necessary – and now this. For whatever reason, there is a staggering clarity to the 3D evident here. The windowed look is marvelous, arguably the best seen. Opening shots of Damon crouching to pick up some soil, with rows of small mounds behind him, are a striking impression. Even animation fails to reach this level of clarity.

Scenes are shot to astound, given adequate background depth and consideration of the foreground. Martian doesn’t need to play tricks. Other than a ship sailing into the camera, 3D is entirely made up of natural dimension. Mars’ landscapes are prime material for a format showcase. There is no disappointment.

While those moments on foreign ground are better struck than those on Earth, little is lost on our homeworld. NASA’s monitoring center, stretched boardrooms; they all establish the effect and work it as far as can be expected. Note a little aliasing does appear within the 3D encode. Some early cross talk (like opening shot early) is remedied quickly. 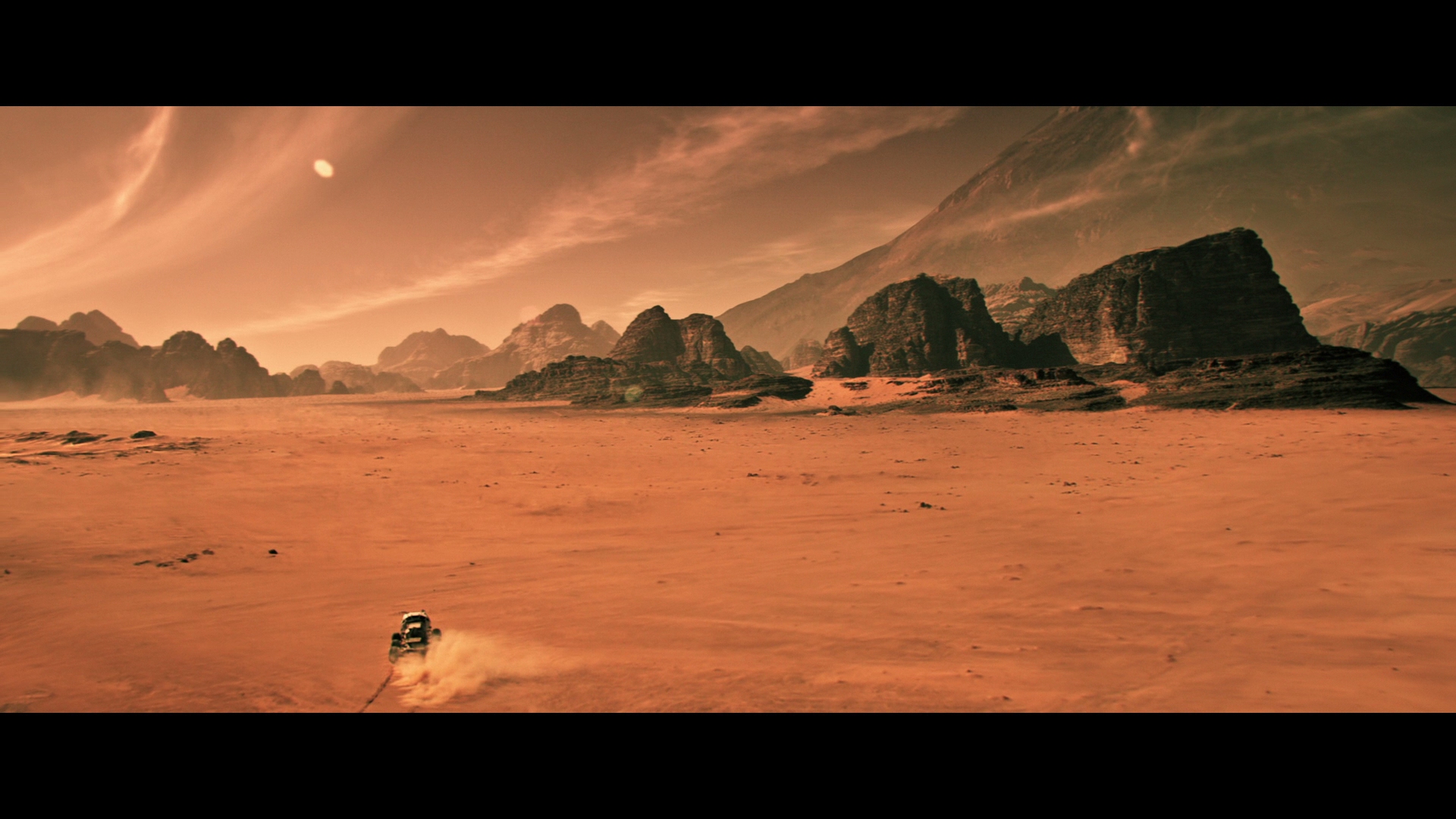 From the outset, this DTS-HD track will work to boost scale. A storm whips up pebbles and sand which swirls flawlessly through each speaker. The sense of wind passing through – in a specific direction no less – is considered. Inside, the effect isn’t lost. Tarps are whipped by the exterior conditions, noted by the full width of the surround channels. Extra heft come from the LFE.

Where the material borrows bolder blockbuster design is with the various launches, on Mars or otherwise. Rockets fire and bass takes hold. The rumble is sufficient to feel in the seat of those vehicles.

Non-action is peppered with pleasant ambiance. Press briefings bring about chatter from reporters. The control room is a lively concoction of whirring computers and other rustlings. Martian never finds a reason to give up on its soundstage.

Bonus on the disc are a downer, either routine or part of a documentary style behind-the-scenes addendum to the story. A gag reel is the only real insight into the production. Signal Acquired peers into the adaptation process. It’s typical of these featurettes and cramped at under 10-minutes. Occupy Mars is better, focusing on the creation of costumes, but mostly on the casting process.

Production art gets its own gallery before the disc offers six extensions on the story which at their best which gives time to Neil DeGrasse Tyson, the worst being an (admittedly funny) commercial for deodorant using Whatney’s fame. While there is some ingenuity here, these bonuses stuff the disc with inessential fluff.